Students walk out of meeting with CSU chancellor 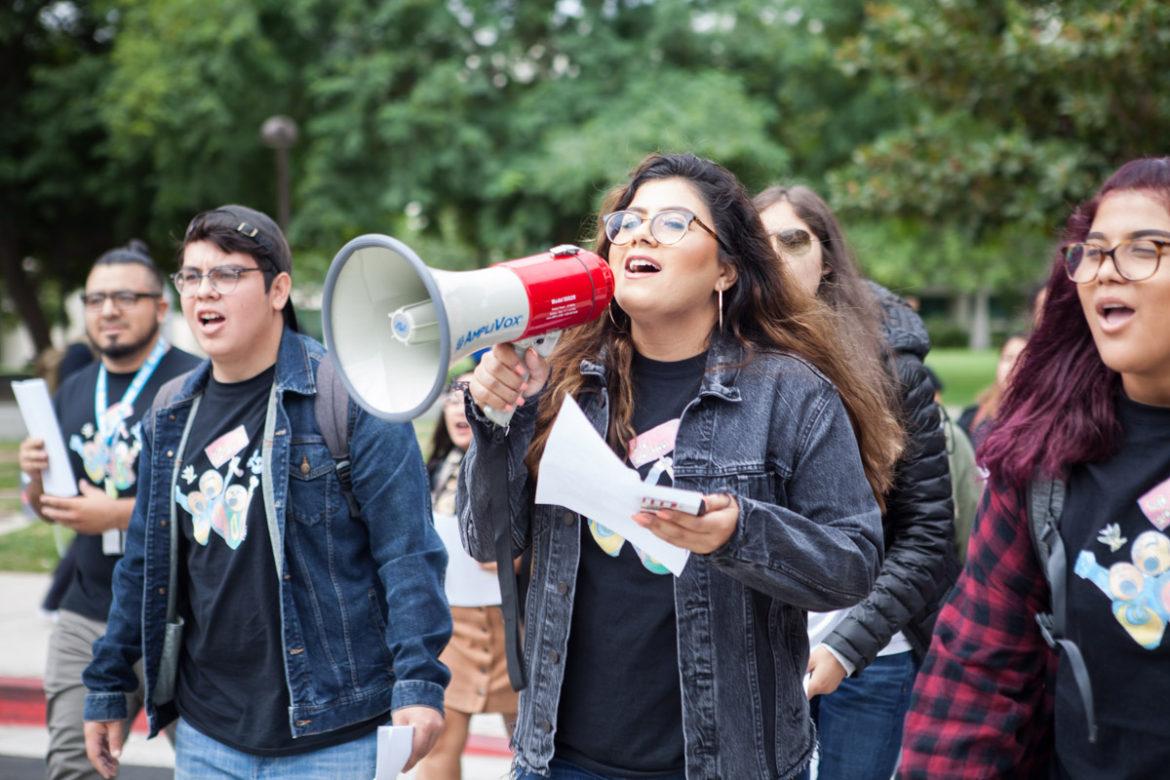 Student protesters presented their demands for Executive Order 1100-Revised (EO 1100-R) during the panel discussion with CSU Chancellor Timothy White before walking out on Wednesday.

The student protesters maintain their demands for the resignations of White, President Dianne Harrison and Faculty Senate President Mary-Pat Stein.

Along with the resignations, the student protesters demand a complete stop to EO 1100-R and Executive Order 1110 (EO 1110), and that Section F be implemented on all CSU campuses.

“We the students reject any Executive Order that will streamline success at the cost of diversity, representation, retention and student mental health,” student protesters stated in their opening comments at the discussion.White was invited on campus by Harrison last week, and it was announced Monday night that he would meet with faculty leadership and academic administrators in Manzanita Hall 100 before meeting with students at Plaza del Sol Performance Hall.

White spoke to faculty at around 9 a.m., then proceeded to sit as a panelist along with Harrison, Executive Vice Chancellor Loren Blanchard and Interim Provost Stella Theodoulou in a meeting open to currently enrolled students. The open discussion that began just after 11:30 a.m. was moderated by Vice President for Student Affairs William Watkins and introduced by Associated Students (AS) President Beverly Ntagu.

The group of approximately 100 student protesters left in solidarity against the application of EO 1100-R and EO 1110, after requesting that White return to the CSUN campus on Oct. 16.

The auditorium was left with about 30 students, many of whom were vocal throughout the discussion and stressed a desire for clarity of the Executive Orders. They also wanted a guarantee that there would be no budget cuts or dismantling of the cross-cultural gender and ethnic studies departments.

During panelist comments, White reiterated that the requirement of Section F would remain.

“There are active conversations on this campus right now about how to get from here to there without any dismantling of programs or reduction in courses,” said White, who then handed over the microphone to Theodoulou.

The model of implementation of EO 1100-R will be ultimately decided upon by the Faculty Senate, or faculty leadership.

“I am working with the faculty leadership to say ‘Let us choose a plan which will not decimate our departments in Section F,’” said Theodoulou.

Blanchard briefly addressed the intended purposes of the Executive Orders.

“There are three goals … with respect to (EO 1100-R),” Blanchard stated. “First is to achieve greater clarity … number two is … to provide more equitable treatment of (transfer) students … and lastly to provide a greater sense of degree completion for students.”

Ntagu made the discussion’s closing remarks, emotionally emphasizing the dedication that AS brings to try and ensure the success of the students that they represent.

One of the students present in the discussion was Tracy Sadek, a junior majoring in political science. She expressed appreciation for Ntagu and other members of AS that were there for the discussion but felt her questions were yet to be appropriately addressed.

“I just need to know,” said Sadek. “I don’t know anything about this, and it makes me mad because I’ve been putting in time in finding out what’s going on and they still can’t tell me.”

In a press conference held immediately following the meeting, Harrison and White stated that they would not step down, per protesters requests.

Harrison intends to conduct small group meetings with students to continue the discussion, which White supports.

White does not plan to return to campus as he will attend a public board of trustees meeting on Oct. 16.

Editor’s Note April 14, 2020: This story was amended to represent current information brought to The Sundial’s attention.