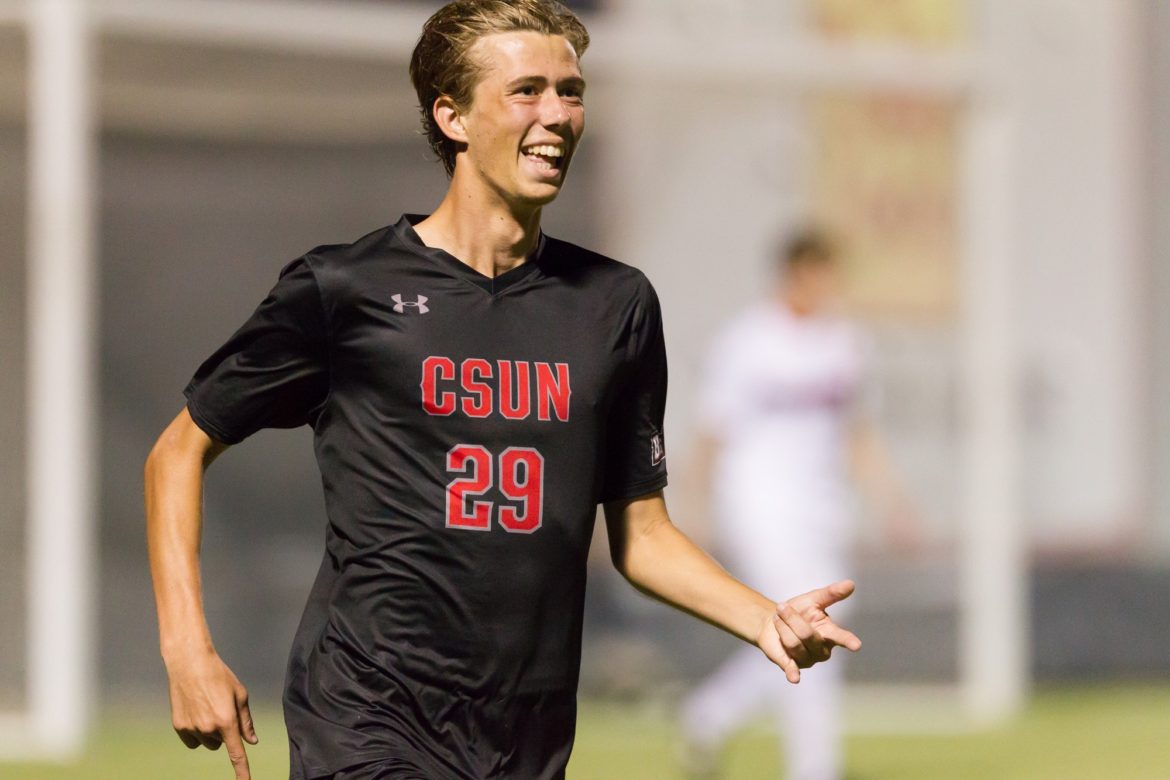 Starting college can be a daunting task for any teenager. You’re leaving home for the first time, leaving your friends and family, and starting a new life in a strange city. It can be an overwhelming experience, though with the right attitude, it can also be a rewarding one.

No person fits that description better than Wolfgang Prentice, the freshman phenom lighting it up for the men’s soccer team.

Raised in Redondo Beach, California, Prentice grew up around soccer, following his older sister, Nikki, to her practices and games since he was 5 years old.

“Before I was even old enough to be on a team I was always just on the side of her games and practices just dribbling the ball,” said Prentice about his first experiences with a soccer ball.

But it wasn’t until he was 14 that Prentice really began to realize just how good he could be.

“At that time, I felt like I’d gotten good enough to where if I stick with this long enough then I can go somewhere with it,” Prentice said.

“I learned a lot from that as a player, testing how I stand with some of the nation’s top players,” he said. “It totally gave me a good confidence knowing that I have the ability to be the best that I can be and to always push myself.”

Prentice pushed himself, making a name for himself at Real So Cal, part of the U.S. Soccer Development Academy, often playing above his age level and sometimes even two levels above.

As a 17-year-old high school senior, he scored nine goals in 29 games at the U-19 level, catching the eye of Real So Cal academy director and CSUN head coach, Terry Davila.

“I just fell in love with the way they coached, the way they treated me, and I just felt that it was the easiest choice just to go (to CSUN),” Prentice said.

He chose Northridge despite having offers from Princeton and St. Mary’s.

Prentice came to CSUN this fall as a freshman having been given a full athletic scholarship and was singled out during the preseason by senior captain, Andrew Rizeq, as one of the freshmen to watch out for.

Prentice was immediately given his baptism by fire by starting the first game of the men’s soccer season in hostile territory at the University of San Francisco before he had even attended his first college class.

It’s safe to say that he passed that test, scoring the first goal of the year for the Matadors in what would eventually be a 3-2 loss. Two days later, he would get his first collegiate assist for the only goal of the game in a tight 1-0 victory at San Jose State.

Being a freshman, Prentice is well aware of the high expectations his coaches have placed on him since day one of training camp, though he knows his opportunities will only come as often as he takes them.

“I’m always excited for the opportunities that I get,” Prentice said about his playing time thus far. “It’s a lot to expect from a freshman just to come out and start in a lot of the games.”

The expectations may be high, but the striker has proven the coaches right in starting him in all 10 games of the season, scoring four goals and assisting another two to give him 10 points so far, ranking him for second on the team and sixth in the Big West.

So what makes Wolfgang Prentice so good at such a young age? The answer may lie in the player he grew up idolizing: five-time Ballon d’Or winner, Cristiano Ronaldo.

“It was always interesting to see how he uses his speed and his body because I always found that I was of a similar height to him and a similar body type,” Prentice said. “Maybe if I put in enough practice … I can end up being close to where he’s at some day.”

Ronaldo, now in his first year at Italian club Juventus, has been terrorizing his opponents for 15 years. Despite being a right-footed player by nature, Ronaldo became equally feared using his left foot, which allows him to cut inside and strike the ball with his famous right foot.

Looking at the way that Prentice plays, it is like seeing a mirrored version of Ronaldo. Being a lefty, the freshman prefers to play on the right wing and, just like his childhood idol, one of his go-to moves is dribbling past his opponent on the side, cutting inside on to his stronger left foot and either getting a shot on goal or setting up a teammate with a cross.

However, this presents somewhat of a problem. Prentice has made most of his appearances for the Matadors playing on the left wing. But he has found a way to adapt, strengthening his weaker right foot to give him that extra edge on his opponents.

“For years I’ve always tried just using my right foot,” Prentice said. “I feel that it was important to be able to use both feet. That way, when you’re in a game you’re not one-dimensional but you’re three-dimensional. You can go at an opponent from any angle. You just become that much more dangerous.”

These days, Prentice has become a fan of Kylian Mbappe. The French 19-year-old became the youngest player ever to score in a World Cup final as he helped the French national team win this past summer.

“He’s just setting the bar, you know,” Prentice said about his newest idol. “It’s good to see young people like that get as much success (as) they’ve gotten. It shows that anyone can do it if you just find the right people and given the right opportunities to perform.”

Prentice has taken to Mbappe so much that he copied the player’s signature cross-armed celebration after scoring the first goal in what would end up being a 2-1 comeback victory at the then No. 11 UCLA, a moment Prentice cherishes to this day.

“To help my team get the win against such a ranked opponent,” Prentice said. “I thought that was just the greatest feeling.”

Prentice’s confident displays over the first half of the season have helped the Matadors to a 6-4-0 record thus far, and his coaches couldn’t be more pleased. Davila has pointed him out after multiple games for the hard work he puts in both on and off the field, calling him “really the nicest kid” after watching him grow up in the Real So Cal academy.

He has also made a strong impression on the rest of the team and he thinks he’s found his home away from home, here at CSUN.

“I think it’s just the fact that I’m living with a group that has the same love and interests that I do for soccer,” Prentice said about being happy at his new school. “Talking to my friends, playing video games, you know just playing with your friends. Just hanging out.”

Prentice knew going in to this year that it would be “a little tough” being away from his family for the first time, but it’s just “the next step” on his road to becoming a professional soccer player.