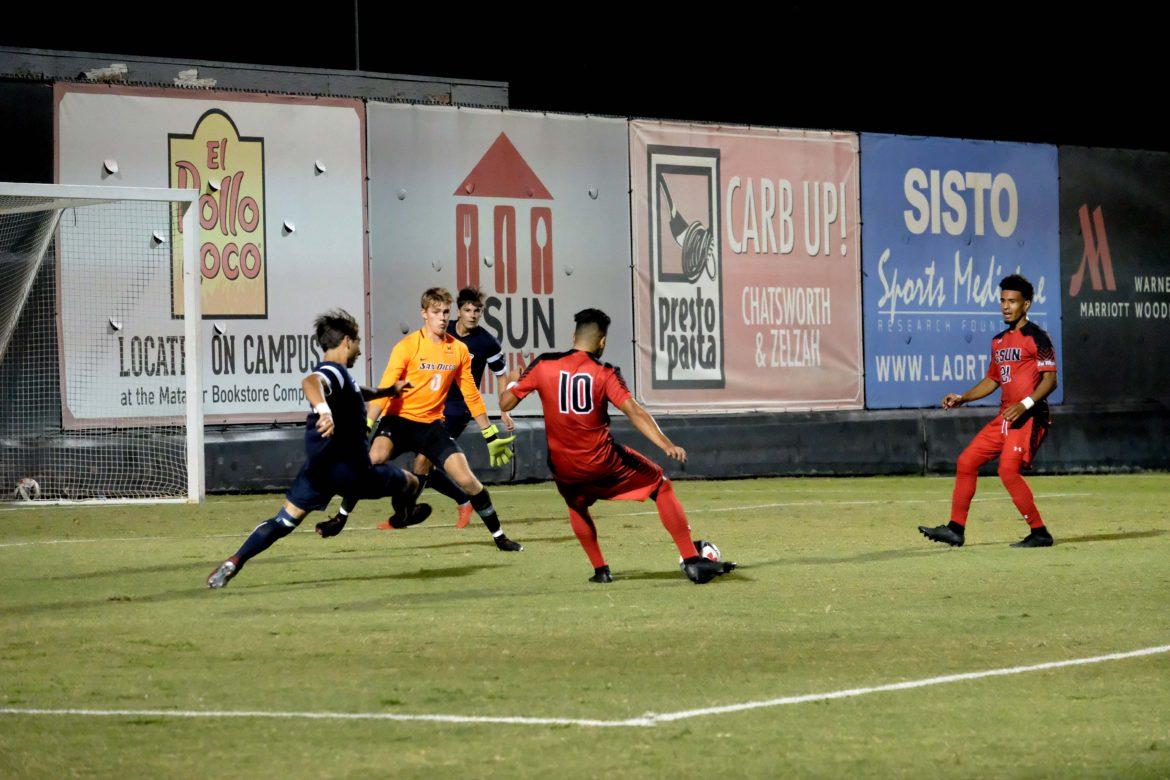 The men’s soccer team made a statement on Saturday, Oct. 6, shutting out No. 16 UC Davis 3-0 in their Big West home opener.

Davis marks the third ranked team CSUN has knocked off this year.

“I’ll enjoy that when I retire,” Davila joked after the game. “That’s for old people, and hopefully I’m not old yet. I’m just lucky to be here and have this place, work with such fine people in this community. Northridge is my favorite place on Earth.”

After earning a 2-2 draw in the Big West opener at reigning Big West tournament champion Fullerton on Wednesday, the Matadors faced another tough test in Davis, last year’s tournament’s runner-up.

The game started ominously, with both sides unable to get their timing right, getting flagged offside multiple times in the opening minutes, a trend that would continue throughout the match.

It was the Aggies that looked the more obvious team to score the opening goal, keeping most of the possession early on and denying CSUN the outlets to get any momentum going forward.

With the Matadors needing some fresh ideas, Davila turned to his bench after 25 minutes, hauling off the attacking line and bringing on the reserves.

These switches ended up being the difference in the match as two quick goals by substitutes Christian Wimmer and Jordan Kinoshi, both their first goals of the year, late in the first half had CSUN up 2-0 going into the break.

Kinoshi was especially lively in the limited minutes he had off the bench, earning praise from Davila for his hard work on and off the ball.

“Our reserves changed the game,” Davila said. “We had two reserves score goals tonight. Jordan (Kinoshi) was player of the match. He made a great play in the second half, winning a ball when they had numbers on us. And that individual brilliance to score the second goal of the game was unbelievable. I was very proud of the team. It was a total team win.”

Daniel Trejo also netted his eighth goal of the year late in the game, sealing the win for the Matadors.

“I think we moved the ball quite well,” Kinoshi. “The gameplan was spot on. We went over a lot of times in training so we knew what we had to do and I think we executed it perfectly.”

Despite the good result, Davila was unhappy with his team’s “lack of discipline” after being called offside five times in the first half and nine times overall.

The match had a feeling of déjà vu, with the 2-0 scoreline heading into the half the same as the match against Fullerton only three days before. This time though, “things went our way” and the team “didn’t have any really bad breaks,” said Davila.

The next home game will be against Cal Poly on Saturday, Oct. 13 at 7 p.m.