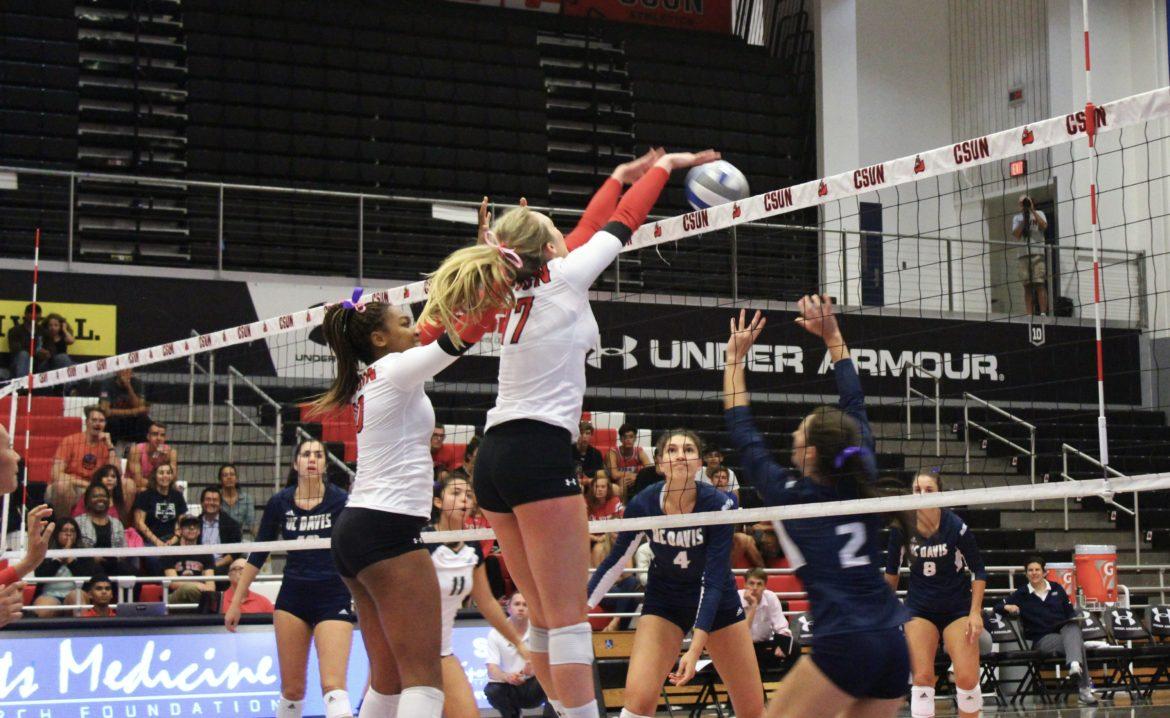 After an incredible comeback victory over UC Davis, the Matadors were swept in their own gym for the first time this year by UC Irvine.

The team is now 3-3 in the Matadome this season with both losses prior to Irvine going to five sets.

After a tight first set where Davis edged CSUN, the Anteaters ran wild in the second, thrashing the Matadors 25-13. Northridge promptly adjusted and responded with their own thrashing in the next two sets.

Multiple big runs in the third and fourth put the Matadors up big and sealed both sets.

However Davis passed and recovered extremely well off the Northridge attack keeping them in the game and making CSUN earn every point.

The final set looked too close to call throughout the set. The teams tied eight times in last fight for the win, but with 13-13 on the scoreboard, kills by Owens and middle blocker Brianna Johnson sealed it for the Matadors.

“I thought this was a character win for us,” said coach Jeff Stork. “We shouldn’t have given up that first set. I don’t know what happened in the second set. But we rallied around each other and played really well in the last three sets.”

Johnson hit .472 on the night tallying eight kills, her second highest this season.

“One of the things we told our setters is that we couldn’t get enough balls to the middles (in CSUN’s previous loss to UC Santa Barbra),” said Stork. “Bri is an example of that.”

A spotlight was shined on freshman Nicole Nevarez, as the outside hitter slammed 14 kills down while hitting .313.

Nevarez has had an up and down season and the win marked her second consecutive match posting over 10 kills.

“I’m personally really happy to see Nicole on the left side,” said Coach Nicole Rooke. “She produces very well for us there. I think sky’s the limit for her. She’s only a freshman.”

CSUN did not get much rest returning to the Matadome to face UC Irvine the next night.

The Matadors did not appear tired jumping Irvine and leading 16-6 at one point in the opening set.

Irvine then had a huge swing thanks to 10 CSUN errors coming after the big lead (11 total in the set) including the last four points of the set, gifting set one to the Anteaters.

CSUN continued to bungle registering another 11 error set, this time Irvine would capitalize and the only tie would come at 1-1.

The Matadors seemed fine, after all they were down two sets to none less than 24 hours ago and came back to win.

CSUN played well in a very tight set but the Anteaters took care of business following a 22-22 tie. With match point Nevarez knocked down one more kill but needing one more the Irvine’s Loryn Carter spiked the last kill ending CSUN’s hopes.

The team will then return for a two-game home stand where Cal Poly and UC Santa Barbara will visit Friday Oct. 19 and Saturday Oct. 20.