How rage is portrayed differently between men and women 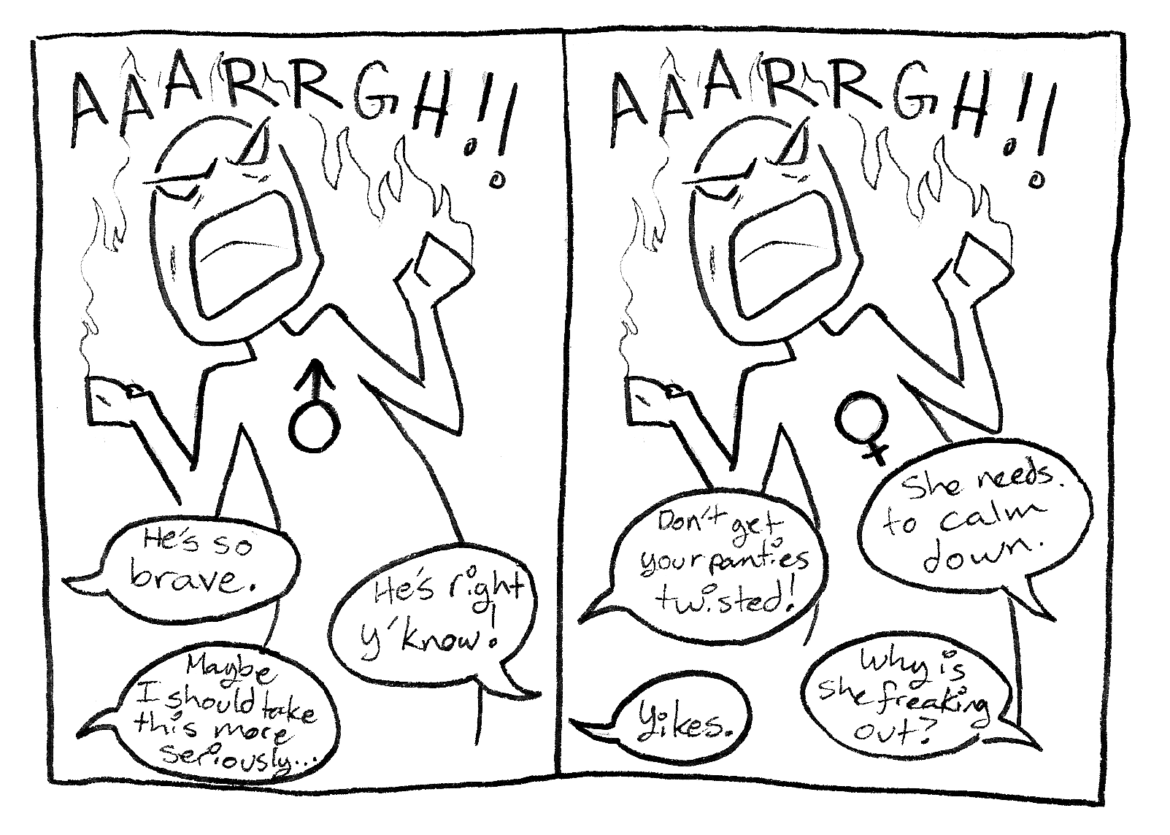 The antithetical testimonies between Dr. Christine Blasey Ford and Brett Kavanaugh have brought forth a disturbing dichotomy in the way men and women are treated within the public eye. During her grueling, hours-long deposition, Ford remained poised, polite and professional as she answered every question following her prepared statement.

Even in the midst of reliving her trauma, Ford — who received a doctorate in educational psychology in 1996 — offered a lesson in neuroscience as her reply to Senator Dianne Feinstein.

Ford never once raised her voice or accused her audience of being unsympathetic. Instead, she was the epitome of grace and emitted the undeniable aura of a woman who has maneuvered throughout life without disrupting the lives of the men surrounding her. She has assimilated into society’s culture despite the overwhelming agony that has plagued her since the 1980s.

Kavanaugh, on the other hand, has proved to be the polar opposite of his female counterpart. Filled with immediate indignation, he presented himself as an unhinged nominee of the Supreme Court.

From dodging questions to becoming accusatory, Kavanaugh offered no solace in his testimony. Alternatively, he was irate, irritated and refused to confirm an FBI investigation that would undoubtedly prove his innocence.

The idiosyncrasy between these two powers has proven to be, nonetheless, unbalanced.

Despite his flustered performance, Kavanaugh continues to keep the support of the Republican party while Ford has had to uproot her life following the allegation she reported as her civic duty.

Though some would rather not admit it, men and women are, without a doubt, treated differently in this country. We are, of course, allotted different rights that are not the same as those in developing countries, but despite this fact, America still has a multitude of issues that need to be addressed. One of them is the treatment of sexual assault survivors; another, the rights women are granted.

If Ford was to approach the Senate Judiciary Committee defensive, scornful and on the hunt for someone else to blame, she would have immediately been dismissed.

In this day and age, women are not given the opportunity to wear their emotions on their sleeves as freely as men do. If women were to inherently react without composure, we would surely be labeled as incompetent and unfit.

One of the greatest examples of this would be the onset of similar insults thrown at Hilary Clinton throughout her 2016 presidential campaign. Clinton was declared inadequate for the position because one of the main concerns was that she would be far too emotional and irrational.

Women are not granted the same emotional allowance as men. Instead, we have been raised to take into consideration the reactions of everyone around us rather than expressing ourselves without fear of repercussion. If we are a sexual assault survivor, we must have become successful in life without such a traumatic experience to hold us back.

Since we were young, women have been taught that we cannot and should not allow our future choices to be dictated by personal matters. We cannot be a survivor and allow our pain to get the best of us. That is not the way women are expected to conduct themselves.

We, like Dr. Ford who had every right to be enraged given the circumstances, must remain poised, polite and professional if we are to be given even a sliver of the same opportunities as those given to our male counterparts. Men, on the other hand, can cry “Witch hunt!” with faces twisted into scowls, skin red with rage, and still be elected a justice to the United States Supreme Court.