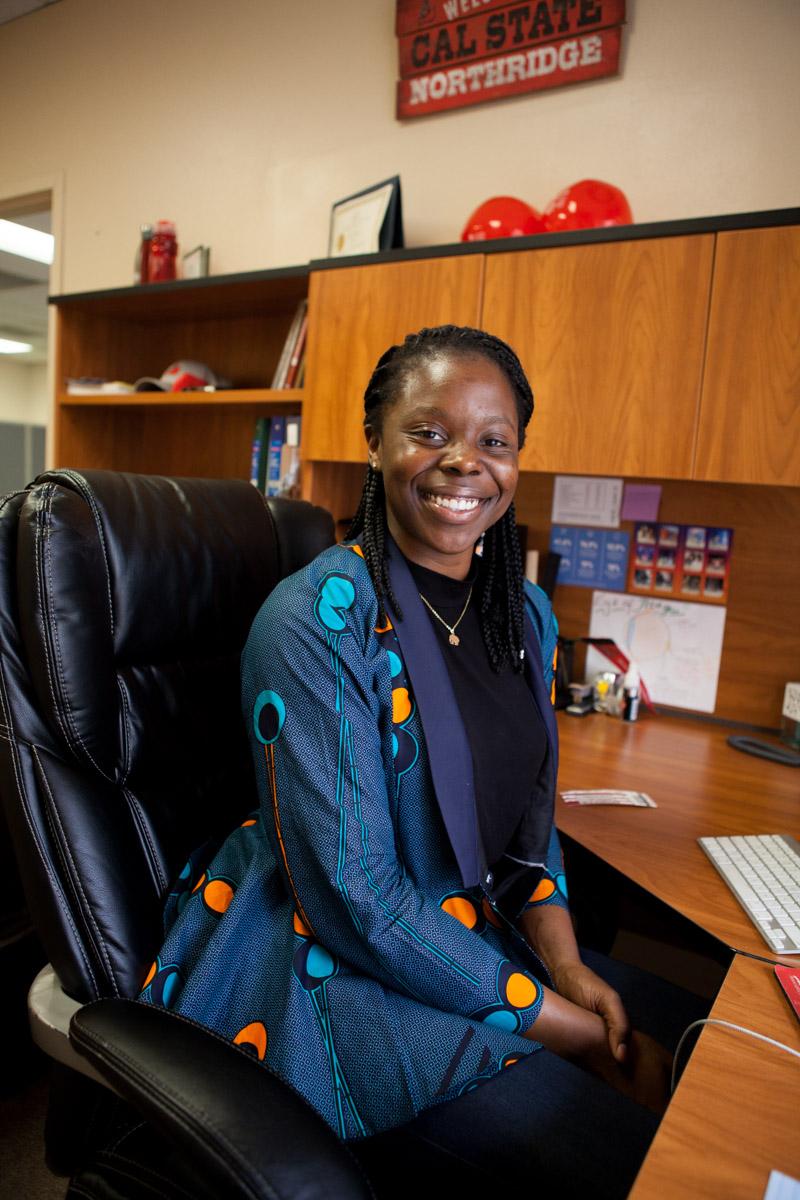 The stone benches outside of Sierra Hall are cold and empty, with a sky full of gloomy clouds above casting a gray shadow over the Oviatt Library quad as the sun goes down in the evening over the campus.

It’s drab, enough to make anyone want to head straight back home or to their dorms. But you’d never know it talking to Beverly Ntagu, the new president of Associated Students (AS) at CSUN.

The 21-year-old student is radiating positivity, waving to passersby who call out to her and say hello.

Now in her fifth year at CSUN, Ntagu, a psychology and pre-med student, already loaded up on 15 units of classes, began her year-long term as AS president on June 4 of this year.

“I came back as president because I feel like I’ve seen CSUN grow over the past four to five years and as a student (who) is not only African-American, (who’s) a female, that came from a struggling background … I’ve been through a lot on campus.”

The role of an AS president is multifaceted. According to Ntagu, a myriad of responsibilities that can range from allocating funding for clubs and campus organizations to appointing students to official positions in the student senate and in faculty councils.

“I kinda do a little bit of everything,” she says, exhaling from her listing her responsibilities. “My main job is being the liaison between the students and the administration. I serve as the student’s voices in all that occurs on campus.”

Ntagu says she ran on a platform of student voice. She wants to make sure there are students in on every faculty or policy-related conversation possible on campus.

“On most faculty committees right now, there’s a student … so that when the administration is talking about policies and procedures, there’s a student there to say ‘Uh that might be good but from my perspective, we may not like this because of X, Y and Z.’”

Ntagu is pushing to hear more of those voices by trying to bring what she and AS are calling the Red Couch tour to and around CSUN, as a way of making AS members more visible to the general student body, and to offer their services in a more public setting.

Because for Ntagu, it’s important that every CSUN student knows that, as an elected official, she is there to listen and to be their voice.

“When I leave my office, when I’m on campus, when I’m at the store, students know they can talk to me,” Ntagu asserts with absolute confidence. “I won’t tell you no I’m too busy. I always sit there and listen to you, anything you have to say, how you feel, and I will internalize it, take it back to my office and see how I can fix it.”

It’s clear in speaking to Ntagu that she’s, perhaps above all else, dedicated to what she sets her mind to. Raised by her mother and father, both of whom immigrated to the United States as teenagers and found success (Ntagu’s mother earned four Masters degrees), Ntagu gives off a presence of inclusion and strength that comes from a strong sense of family and culture.

“Being Nigerian, we’re a very overachieving culture, we always believe in being better than ourselves … I push myself more than I need to and that’s because I believe that I can never settle for being okay … I always have to keep going because there’s always more to do.”

Ntagu is big on CSUN’s unique campus culture and is quick to praise the diversity on display. Which is why the current battle between students and administration over decisions to cut down on cultural and diversity studies requirements at CSUN, culminating in several protests and even a campus-wide walkout in the first week of October, has been an emotional one for her.

“When the walkout happened I met at the university fountain and I listened the entire time,” Ntagu recalls. “The concerns, the suggestions, not even just that, the emotion, the power, the unity, the feelings I felt come from student’s mouths.”

Ntagu is proactive, though, doing whatever she can to make sure students are heard in the face of big sweeping changes.

“As a campus right now we are not in a good place, we’re not,” Ntagu remarks, though she doesn’t relish saying the words. “And I want us to get back to that good place. Until we have that … students do not feel confident in where they go and what they do. I didn’t come here feeling like that … I came here with confidence in the school I go to … And I don’t think it’s right that students here now don’t feel that.”

For someone who works to make sure everyone is heard, this climate is the opposite of what Ntagu is working towards. “It hurts me to hear that students don’t feel like this school is for them … That hurts me.”

As the president of Associated Students, or as she would say, Beverly Ntagu will keep working her hardest for those voices.

“All I do, all I say, all I work toward is for the students … I believe in the authenticity of this campus. We are different. CSUN is a different campus … The fact that we have Section F and nobody else does … Those things are very important and very unique to CSUN and I want students to know that they can defend that from beginning to end … they can come to AS, they can come to their leaders and they can express that.”

And for any new students on campus, walking into their first semester here at CSUN, Ntagu has this to say: