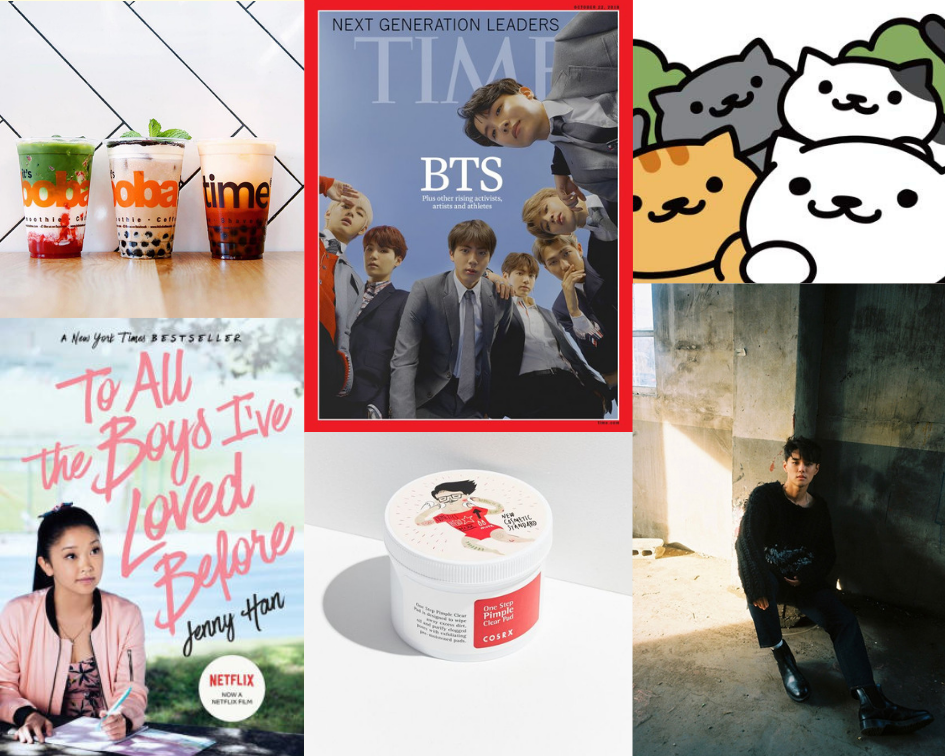 Throughout this year, Asian pop culture has meshed with Western culture via music, entertainment, skincare and even games. Seeing traces of Asian culture is becoming everyday, in the forms of:

MUSIC: It’s no secret that K-pop group BTS has made records for the music industry, either through their recent victory in the AMA’s or their performance in Citi Field. Appearances on The Ellen Show, the Graham Norton Show and as the first K-pop cover of TIME magazine cemented their name in American entertainment. Ultimately, BTS has helped jumpstart Korean representation in the media.

Similarly, Korean R&B singer and producer Dean had recruited Anderson Paak and Eric Bellinger for tracks “Put My Hands On You” and “I’m Not Sorry.” These were a part of his American debut in 2015, which he prioritized ahead of his Korean debut. He was also the first Asian artist to perform at Spotify House at SXSW 2016, making headway since early on in his career.

GAMES: “Neko Atsume” is a simple cat game that has made waves with Western and Asian users alike, enough to get its Reddit page filled with more than 31,000 subscribers. Available in Japanese and English, users provide goodies and food for a variety of homeless cats that come and go. Foreign users have been led to enjoy signs of Japanese culture that appear in the game, as well as the language.

“(In the game) there’s stuff like a ‘mosquito pig’ that comes in the summer that makes users wonder why it’s there,” said fourth-year student Aileen Park.

Translated from “katori buta,” the household item is commonly used in Japan to catch mosquitoes.

FOOD: Thanks to inspiration from Hong Kong, Japan, Thailand and Taiwan, Angelinos can enjoy ice cream as rolled sheets, if not with bubble waffles or fish-shaped taiyaki cones.

Taiwanese bubble tea has also made its mark through chewy boba pearls.

FILM: Both “Crazy Rich Asians” and “To All the Boys I’ve Loved Before” made their debut as Asian movies that hit the big screen. While the former marked a new start with Chinese and Singaporean representation onscreen, the latter introduced a hybrid Korean-Mexican culture onto a wide platform such as Netflix.

“Having Asian representation even in Netflix means that American culture now wants to collaborate with Asian culture to make something great,” said third-year student Taylor Garcia.

BEAUTY: Lastly, Asian skincare products find themselves homes on the shelves of CVS, Target and Urban Outfitters — providing easy access to purchase face masks, pimple patches and even lip tints. Face masks have also been available at the Matador Bookstore for a quick and cheap access to skincare.

Essentially, Western culture has grown to welcome and even incorporate Asian culture — creating a hybrid, colorful platform for ideas to form. New ideas spark new creations and interests, which change how people enjoy everyday things such as a hangout or their time alone.

While culture is constantly evolving, the hope behind accepting Asian pop culture lies in accepting the people behind it all — particularly in a time where racial awareness and equity are reaching their peak.