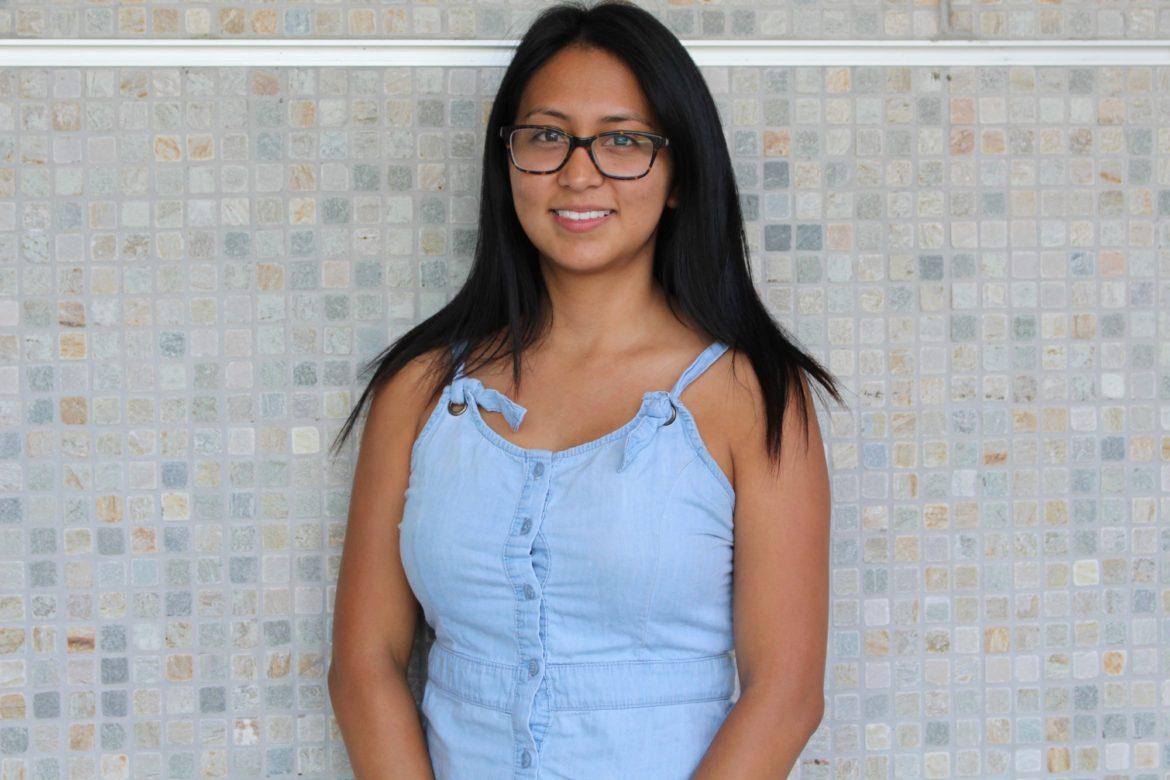 Daniela Rosas is a senior, double majoring in Psychology, and Chicano and Chicana Studies. she will graduate in the fall of 2018. Photo credit: Yomira Saiqui

A woman cut her hair so short that she could have easily passed as a real-life Dora the Explorer. As she waited for her mom to pick her up, the woman gave her juice to drink that put her to sleep and her mother never arrived. When she woke up, she was sitting in the back seat with her older brother and the woman, who was to help them cross the border.

This marked the end of Daniela Rosas’s life in Mexico, and the beginning of a new life in the U.S.

At the age of six, Rosas — now a CSUN student double majoring in physiology and Chicana and Chicano studies — left her beloved hometown in Puebla, Mexico, which is known for its traditional Talavera pottery and regional Mexican cuisines such as mole, chiles and barbacoa tacos.

Even with its rich and significant contribution to the Mexican culture, its residents still struggle economically. Rosas’s father, Jose Luis, was offered a stable job in Los Angeles. Initially he was the only one who planned to come to Los Angeles but Daniela’s mom, Camelia, disapproved of the idea.

“He wanted to leave us behind but my mom said ‘no, either you go and take all of us or you stay, or if you go, you forget about us,’” Rosas said.

She was not aware that her family was on the verge of breaking apart.

“I don’t really remember everything, all I could remember was that one day we left Puebla to (Tijuana) by plane and my mom told us we were gonna go to this lady to cut our hair but next thing you know I didn’t see my mom after that,” said Rosas.

To avoid any circumstances that would hold them back, Rosas and her older brother, Jose Luis Jr., were given something to drink that put them to sleep and avoid any communication with officials that requested information.

“I pretty much slept the whole way, passing (Tijuana), I think in San Diego we got to (the) house where there were other kids staying … and then after that, I remember I went back to sleep and when I woke up the second time I was already here in LA,” Rosas said.

She added that it took a week to cross the border and is thankful that they drove.

“Thank God I didn’t walk the desert because my mom thought it was risky,” said Rosas.

Unlike other people who are known to spend days walking the desert, Rosas and her brother were given false credentials that allowed them to enter the U.S.

Her parents did not face the same luck. The first time they tried to cross, they were caught by the border patrol walking the mountains and were sent back to Tijuana, where they tried a second attempt.

Not having her parents around made it difficult for Rosas to adjust to the new environment, and she felt confused and lonely not knowing what had happened to them.

“It took me two years to learn English … often times I would hear comments like ‘oh, you’re a wetback, go back to where you’re from,’” said Rosas.

Rosas never told anyone she was undocumented because of the embarrassment.

“In my second year of college I accepted the fact of who I am and where I come from because I didn’t make this choice, my parents did,” she said.

Rosas has never thought of the legal status as a barrier. This is her second year as a peer educator who advocates for sexual assault at a CSUN organization called Project Date.

“Project Date welcomes everyone,” Silvia Robles, peer educator and secretary of Project Date, said. “We never focus on the status of a person because we don’t believe that people should. As a matter of fact, each time we host events, we make sure to ask the Dream Center to collaborate with us so that they can share their resources with the students.”

Silvia met Rosas two years ago when she joined the program and has worked with her on a daily basis to raise awareness about rape and sexual assault and its prevention.

“I never would’ve even known she was undocumented if she didn’t tell me,” Robles said. “And I think that’s an important fact that I should emphasize on; there’s no reason why we should create barriers, because ultimately we’re all the same.”

Rosas will be graduating this fall, and she notes that she will continue to take advantage of every opportunity that is given to her.