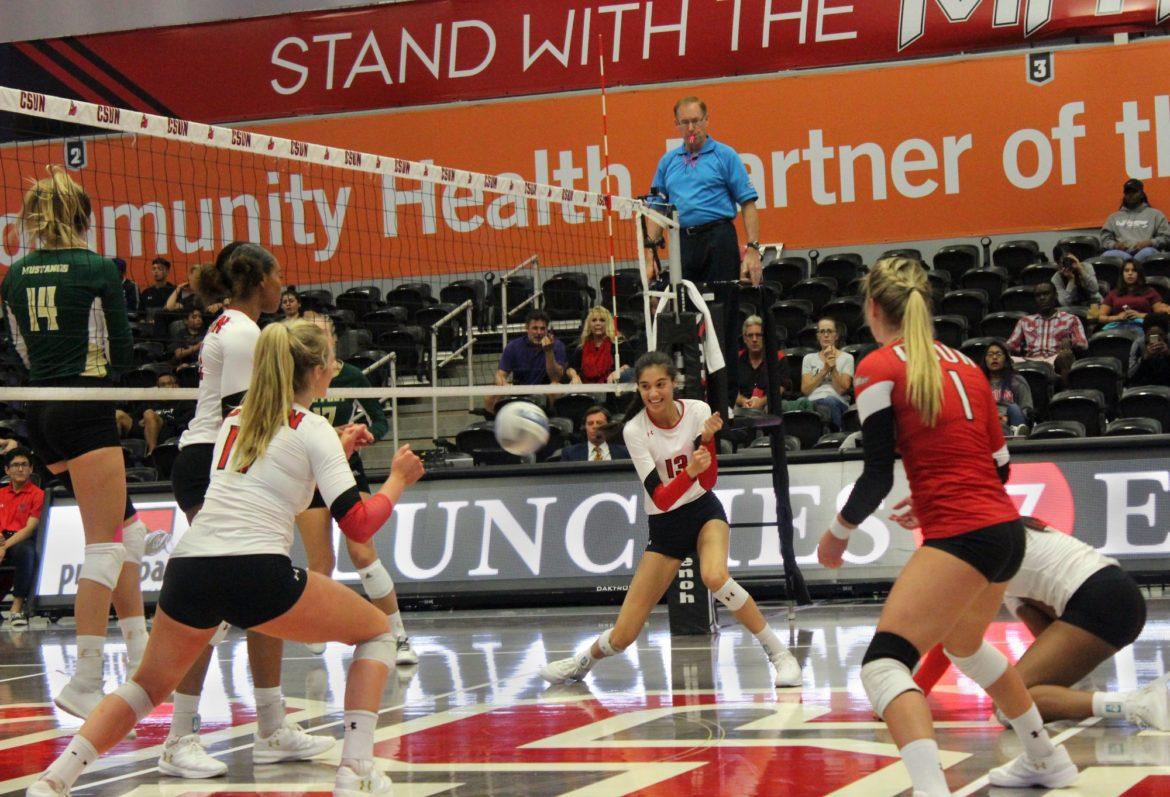 The season of adjustments and struggles continued over the weekend for women’s volleyball as they suffered losses at home to visiting No. 12 Cal Poly and UC Santa Barbara.

Cal Poly visited the Matadome Friday, Oct. 19 for the second meeting of the two. Cal Poly repeated the same result as the previous match sweeping CSUN with scores of (29-27, 25-14 and 25-17).

In the previous meeting, Cal Poly controlled throughout and dominated the Matadors. In both meetings, the opening sets would be tight with early momentum from CSUN.

Northridge controlled as much as a five point lead but squandered it. The two teams would go back and forth going into extra points where Cal Poly was finally able to finish off CSUN. Matador errors gave the Mustangs three of their final four points.

The final point was a kill crushed by Cal Poly’s Opposite Torrey Van Winden. Winden finished with a game-high 20 kills and ranks second in the Big West in kills.

In the second set, Cal Poly took control and led by as much as 12. CSUN had opportunities but shot themselves in the foot over and over. It seemed every time the team was aiming back into the game, another unforced error occurred.

CSUN had eight errors in the set while Poly had just four.

The Matadors would lean heavily on outside hitter Aeryn Owens. The senior had a team-high 19 kills in the match as well as nine of CSUN’s 17 points in the third.

Middle blocker Brianna Johnson also had a great night on the net. Johnson slammed seven kills on 14 swings to go with two blocks.

The next day CSUN had to face yet another team that has swept them.

Santa Barbara entered the Matadome but was challenged by Northridge as this is a whole different team when playing at home.

“We played much better against (UCSB) this time and battled them at every point,” said coach Susan Terrusa.

“One big thing we’ve been working on is finishing games,” said Johnson. “We are comfortable getting a lead but we need to stay comfortable throughout the game to be able to finish.”

The Matadors jumped out to a big league in the first set and even a run with eight unanswered Santa Barbara points could not get the Gauchos within striking distance of the Matadors.

UCSB capitalized on the Matador errors in the second, winning smoothly by 10 thanks to as many CSUN errors.

Northridge responded and pushed hard, led of course by Owens who had eight kills in the set alone. Naturally nine CSUN errors held the Gauchos in the game but a kill by middle blocker Morgan Salone sealed the third for CSUN.

Freshman Nicole Nevarez led CSUN in the fourth registering six of her 14 kills in the set. It would still be not enough as Santa Barbara held off the Matadors to force a fifth set.

No team could pull away in the fifth with the largest lead being three points. CSUN held match point at 18-17 but UCSB came alive following the deficit with a kill by junior Lindsey Ruddins, an ace by outside Torre Glasker and one last CSUN error to finish out the game in the Gauchos’ favor.

Ruddins finished with 24 kills and continues to dominate the Big West where she leads the conference with 472 kills this season, 125 more than any other player.

Should the Matadors lose two more games it would mark the fourth consecutive year with an under .500 conference record.

CSUN now hits the road for a trip south to face UC Irvine before a long trip north to play UC Davis. Matadors versus the Anteaters gets going Thursday, Oct. 25 at 7 p.m. CSUN at Davis then commences Saturday, Oct. 27 at 7 p.m.