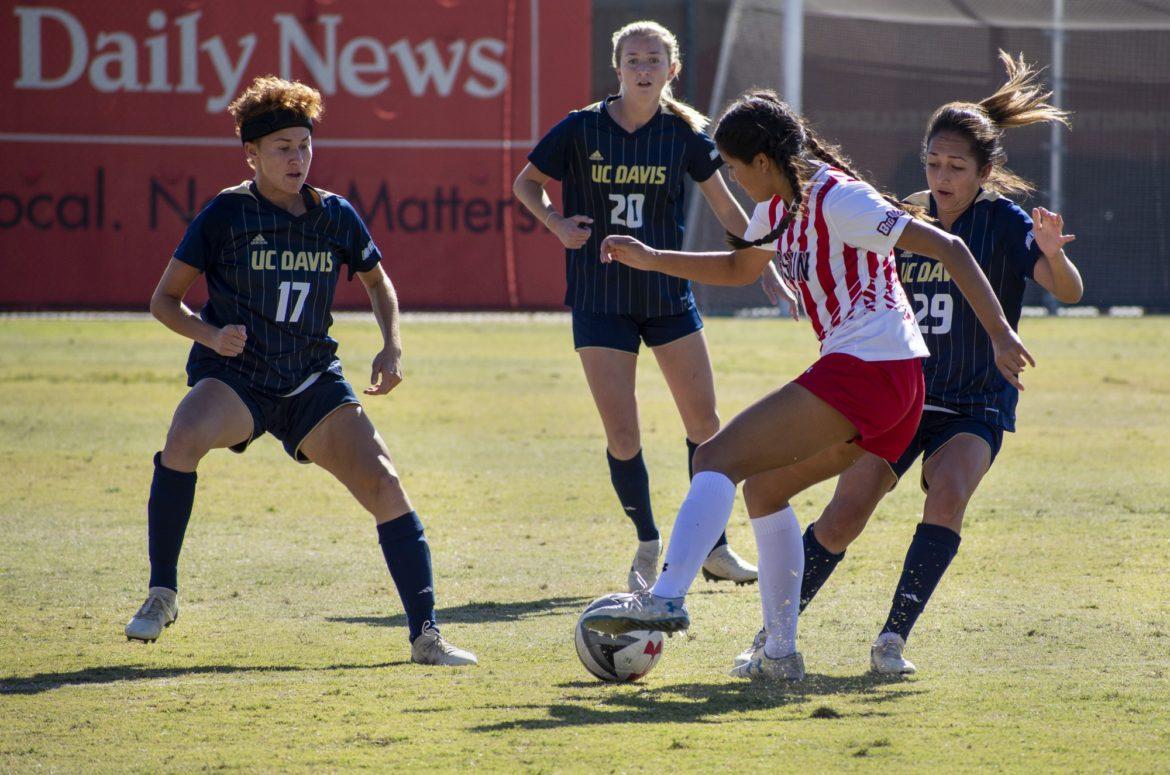 CSUN senior midfielder Marissa Favela winded up and took her corner kick in her final game at home. The shot twisted beautifully but none of her teammates could find the ball in a crowded box.

Just like many games before, the Matadors were unable to capitalize on the opportunities given to them leading the team to fall in overtime 1-0.

CSUN was unable to convert on five scoring chances inside their opponent’s box, and UC Davis made the Matadors pay.

Aggies forward Mahlah Catline fired a free kick 15 yards out that caromed off the hands of freshman goalkeeper Amanda Delgado just enough for a score.

The frustration of the season has taken its toll on coach Keith West after watching his team squander its chance to move into a possible tie for the fourth and final Big West playoff spot.

It was a disappointing end for the team who has been torn by injuries all season.

Freshman starter Iffy Mbeledogu has missed the season due to a knee injury, and redshirt freshman Alyssa Aguilar has been sidelined with an ankle injury since midseason.

It was the final home game for senior Lindsay Kutscher who will go down in CSUN history as one of the program’s best defenders.

“This senior class has done great things, and they are still doing great things,” West said. “Seasons are what they are, and I’m so proud of these young ladies. These girls have taken our program to places they haven’t gone before.”

Expecting to fill Kutscher’s role next season is Kassandra Matthews. Matthews was active throughout the second half with her firm touches and helping drive the ball upfield.

“I’m really disappointed that we didn’t get the win today for our seniors,” Matthews said. “I love them so much and everything they’ve taught us underclassman throughout the year. Lulu, Marissa and all of them have taught me to become more vocal and becoming a leader.”

CSUN (2-4-0 Big West) has officially been eliminated from tournament contention and will play their final two games of the season on the road against some tough opponents. On Thursday, Oct. 25, the team visits UC Santa Barbara (4-2-0 BWC) for a Big West clash at 7 p.m. The finale will be played at Long Beach State (4-1-1 BWC) for the final game of Favela and the other seniors’ CSUN careers.