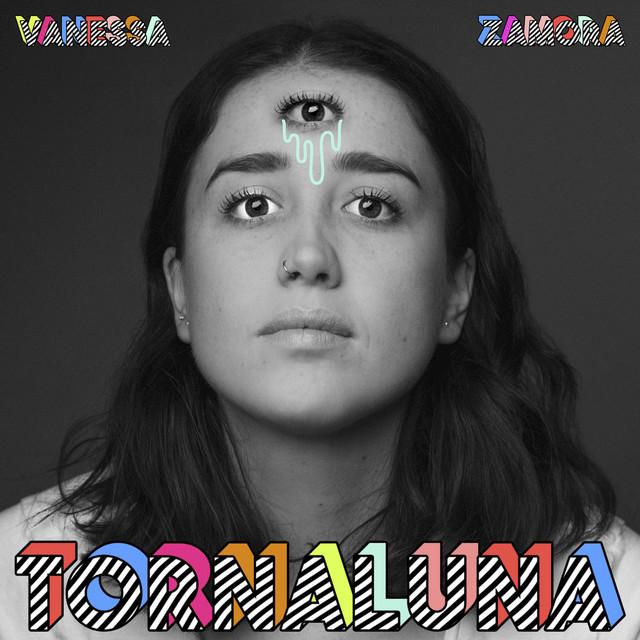 Tornaluna album cover. The album and the title convey a message of the changes the human mind goes through. Photo courtesy of Vanessa Zamora

“I think the moon influences our everyday lives as much as it influences nature,” said Vanessa Zamora over a telephone interview. “I think humans are like 80 percent water so it could affect us the way it does with the tides. The phases of the moon resemble our feelings; sometimes we are full and active, but sometimes we feel half-way there like the moon. That and the fact that it’s spinning. It’s transforming, changing. That’s why the album is called ‘Tornaluna.’”

Whereas Pink Floyd once explored the obscure side of humanity in “Dark Side of the Moon,” Vanessa Zamora’s connection with the moon is more personal. Her album, along with the moon, rotates with the listener; taking them on a palette of ten colorful songs that touch on the themes of solitude, human introspection and the multiple changes of life.

She will be performing at The Roxy on Oct. 28, to present her newest work to the Los Angeles area among other cities of California. The show at The Roxy will be co-headlined with Loli Molina, an Argentinean artist, and LA local band, The Pantones. The album as much as Zamora’s live performance is a pleasant listen for any psychedelic pop/rock lover. She is one of the few female Mexican artists dealing with these genres of music.

She has turned to a more vibrant genre compared to her previous debut album released in 2015. Zamora spoke with The Sundial about this and her album as a whole, shining a light on her work with female producer Marian Ruzzi, her views on friendship, solitude, and change and how her upbringing in Tijuana has shaped her music.

What was it like to work with the producer, Marian Ruzzi, for this álbum?

Zamora: I began working in the album at home all alone. I found Marian at a friend’s birthday party, and she started adding baselines to a few songs. That’s how she began working with me to the production of the album. We had a musical “clique.” I learned a lot from her and thanks to the team we formed it’s what made “Tornaluna” happen.

Was it your idea originally to introduce more psychedelia into your music?

Zamora: Definitely. I knew I wanted to gear towards a more colorful sound, not like the first album which is more folk. I wanted it to represent what I’ve experienced this past couple of years. I learned a lot about myself. It was also very chaotic, and a lot of changes occurred, and that euphoria is also reflected in my work.

There are a few songs I know that only speak about friendship. What can you tell me about the creation of “Malas Amistades” (“bad friendships”) and “Buen Amigo” (“a good friend”)?

Zamora: Those songs go hand in hand. The second song is an interlude, and I told a friend of mine to get in the booth and say something out of his heart whatever he thought about friendship. It was all done in one take. I think it’s trying to say that we are our worst friends, we are always judging ourselves and always trying to find our half in other people. But at the end of the day, you have to be your best friend for yourself.

Your song “Solegrande” touches on the theme of solitude. As an artist surrounded by people every day would you say that you feel solitude the way you describe it in the album?

Zamora: Yes, but I wrote this song because I like being alone. So it touches on that bliss you feel when you’re being yourself. Not having to depend on anyone. I like being alone at home doing my own things, and I truly enjoy it. We wanted the music video to portray that too, that’s why I’m alone in the forest as if I were on an acid trip, dancing, enjoying myself. It’s a kind of “good solitude.”

I see I was personally interpreting the lyrics with a negative connotation.

Speaking of song titles, why did you choose to take out the vowels in the title of “Hbls Mucho,” shouldn’t it be “hablas?”

Zamora: I did that because I thought it was a way to say something and not saying something at the same time. The lyrics of that song are about a love affair.

What do you have planned for your fans in the near future?

Zamora: We’re starting our “Tournaluna.” It began in Mexico City and on Oct. 23, we’re going to Berkeley and Sacramento. I’m playing with a girl named Loli Molina. The show in San Diego will be with The Marias and the show in Los Angeles on the 28th with The Pantones. That will be the first phase of the tour that’s what I’ll be focused on next year. Perhaps play in other countries of South America or Spain.

I notice a sonic resemblance with bands like “Beach House” and “Tame Impala.” Were they some of your influences while growing up in Tijuana?

Zamora: Yes, I really like Beach House and Tame Impala. I really like pop and psychedelic rock. Growing up near the border of Mexico, having California as my backyard has made me be in contact with the U.S. some way or another. It has affected how I think, too. Growing up in Tijuana, I used to listen to radio stations from San Diego. It did influence the music I grew up listening to and the music I do now.

Editor’s note: Due to reasons outside the artists’ control, the show was canceled.