A closer look at Iris Peretz and her visual art 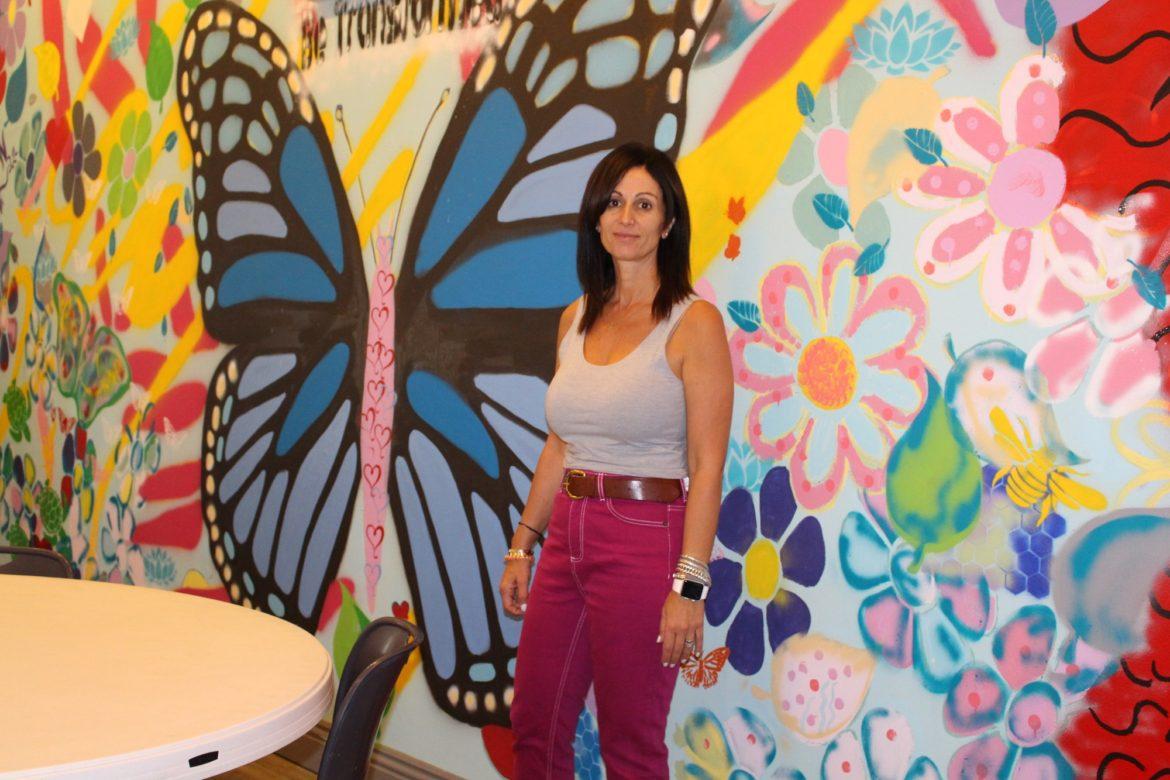 It took Peretz two afternoons to crate the mural along with her husband and two other CSUN students. Photo credit: Yomira Saiqui

Buried in the western hills of Sylmar sits Hope Gardens, a transitional home for women and children who might otherwise be homeless on the streets of Los Angeles.

It’s a quiet place, the glass front door is flanked on one end by a small fountain running down the length of the main building and by a patch of garden and grass on the other.

Inside, the dining room is front and center. Round picnic tables dot the room, each of them surrounded with a half a dozen chairs for the women staying there to share food, stories and community.

On the eastern wall of the dining hall is a freshly painted mural depicting a butterfly surrounded by multi-colored flowers, bees, turtles and a solitary rose rising through it all. In the center, in bold letters, rests the phrase “Be Transformed.”

The artist responsible for this bright and colorful mural is Iris Peretz, a CSUN student currently studying in the art department.

Peretz grew up in the ’60s and ’70s and has bounced between jobs and advertising firms all her life. She says that art was always her passion, but it wasn’t going to pay her bills when she was younger. Now, though, she finally has the time to pursue it.

“I went to school originally for business, I was in advertising for a while,” she said. “Now that I’m older and wiser and have a few investments I can go back to school for art. Just for the fun of it.”

Despite only just recently beginning formal education in art, Peretz has a varied history with it. She started becoming involved with the creative side of advertising as she moved up from entry-level positions to advertising direction. She even at one point designed a clothing line.

“I always liked art but art didn’t pay as well as advertising,” she said. “So advertising is kinda art you get paid for … Art for art’s sake is a beautiful thing, but if you make money out of it, it’s a bonus.”

Peretz works mostly in paint and sculpture, but the variety of her work is plain to see. On her website and her Instagram, there are hundreds of works of art made from a variety of materials, everything from battered computer cases, motorcycle helmets and even aluminum-cast dog poop.

“I love using recycled materials,” Peretz explained. “Not just recycle, upcycle, reuse something for something different … In fact, I have like four mac screens on my floor of my studio like waiting for something to happen.”

Though Peretz is quick to point to the others who assisted her with this project, citing Los Angeles based painter Dezcjon (the artist who created the standout rose in the mural) as one of them, ultimately Peretz is the one mainly responsible for this new mural brightening the dining hall of Hope Gardens.

Peretz says the final idea for the butterfly mural came from the people at Hope Gardens who identify with the butterfly because of how it represents transformation.

“I’m like ‘Fabulous, I love happy art,’” she explained. “So I came up with a butterfly design … and with heavy use of vector files, which I’m kinda learning how to use … it helped us get it done in two afternoons. Cause I also had midterms.”

Arpa Matevosyon is one of the current residents of Hope Gardens who first arrived in April with her baby Julian. She was present for Peretz’s work on the mural and describes how important the dining room where it rests is for their community.

“I saw the transformation of the wall,” Matevosyon said, keeping one hand on her child’s crib and turning her head to the mural. “I really love the rose … It’s such a classic symbol … I really love it … And the butterfly, the caterpillar of turning into a butterfly … the freedom. This is like our community. You get the closeness of the community in this room.”

For Peretz, that positive effect is what it’s all about.

“A lot of people … it’s not an equal dealt hand,” she said. “It’s very skewed. People do have hardships. Some people do get stuck in a situation, whether it’s a physical stuck or a mental stuck, it’s always nice to be made to feel good … If I can do that to somebody with my art, someone I don’t know, that would make me feel really good.”

Peretz has an upcoming show in Los Angeles titled “I’ve never met a person I didn’t like…at first,” that will be holding an opening reception at Art Share L.A. on Nov. 10.

Until then, Peretz cuts straight to the point.