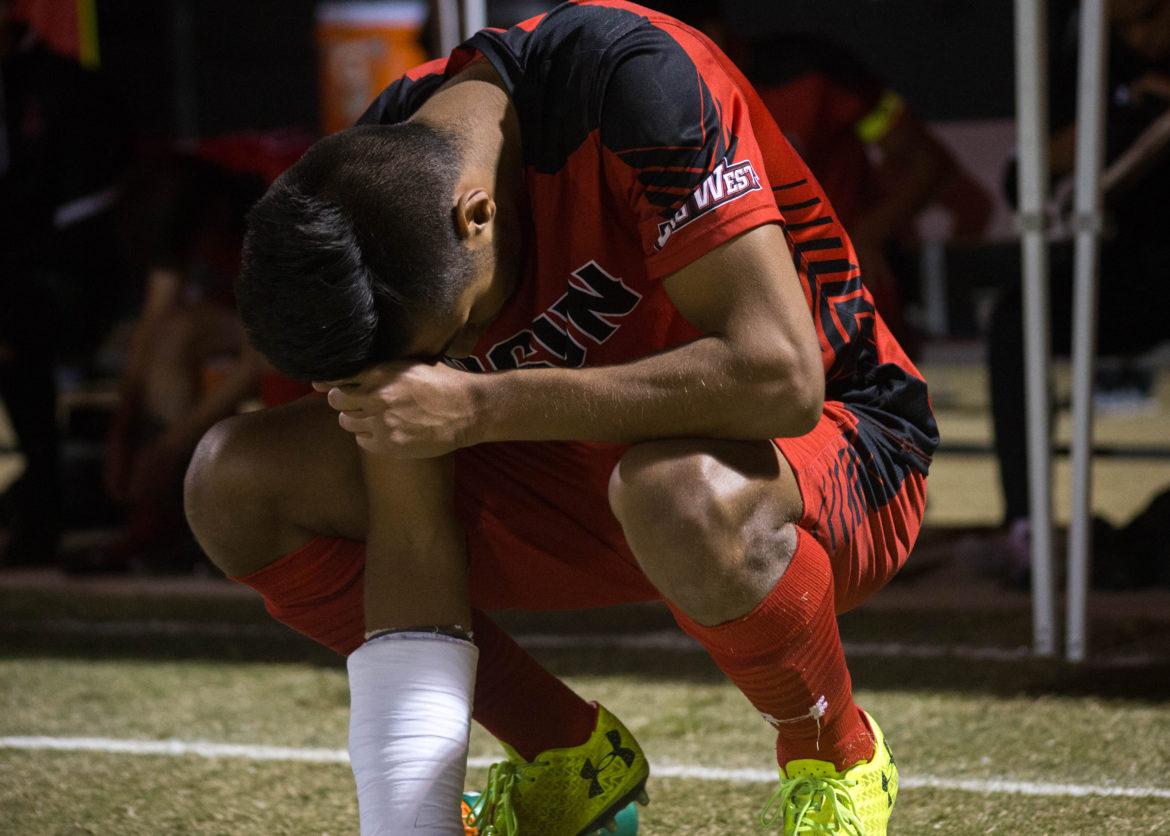 The Matadors crashed out of the Big West Tournament in the first round after losing to UC Davis 3-2 at home.

The Matador players were emotional after the game, with many of them sitting on the field after possibly playing their last game of the season.

CSUN got the first goal of the match after 15 minutes when sophomore Daniel Trejo found senior Michael Flores open on the left side of the box and slid it into his path for Flores’ second goal of the season.

The Aggies answered back after 30 minutes when defender Kaleb Schirmacher headed a deflected throw-in in to the back of the net and the game would remain 1-1 going in to halftime.

“I thought that we played extremely well in the first half,” Davis head coach Dwayne Shaffer said. “We kept the game where we wanted it. We kept it close.”

The Matadors came flying out of the gates in the second half, with much of the offense flowing through Flores on the left side, but no goal would come despite the numerous chances created.

Those missed chances would come back to bite them as Davis took the lead after 73 minutes through an own goal by defender John Andersen. His attempted clearance deep in his own box fooled goalie Henrik Regitnig, who could only watch as the ball floated in to goal to make it 2-1.

The Matadors kept on fighting and nearly equalized after 76 minutes when Trejo hit the post after Flores put him through on goal.

The Aggies would again make CSUN rue the missed chances when defender Justin Wright scored off a quick counter from a CSUN set-piece to make it 3-1 after 78 minutes.

“Maybe (we could have done better on) transition defense after a set piece,” Davila said. “That hurt us, the third goal.”

The Matadors would go for a full-on attack for the last 12 minutes, pushing defender Samuel Dadzie to the attacking line in an attempt to win the aerial battles up front.

They would pull one back after 81 minutes when forward Johnny Rodriguez scored his fifth of the season after Trejo found him with a lobbed ball over the top of the defense to make it 3-2.

Rodriguez would go on to put another ball in the back of the net after 85 minutes, but he was called for offside, negating the equalizing goal.

“They made a tight call on that play. I thought we tied it up. The ball was in the net,” Davila said.

CSUN kept pushing though, sending every player forward in a bid to extend the game in to overtime. They thought they got their lucky break when freshman Wolfgang Prentice went down near the penalty box, but no call was given despite shouts from the bench for a foul.

The score would remain 3-2 at the end of the 90 minutes, with Davis advancing to the semifinals of the tournament where they will face top-seeded UC Irvine on Saturday. Davis now has three straight wins over Northridge in the Big West Tournament.

Shaffer said it was an “exciting game” and “to come to Northridge and win a game is extremely difficult,” giving full credit to the Matadors for pushing Davis all the way to the last whistle.

“In the second half we came out, we had a great energy and great effort,” Shaffer said. “We scored two goals to make it difficult on Northridge and that’s exactly what happened. They had some quality chances, but overall I thought it was a great game. Terry’s got a great team and so do I. It was just a great game between two quality teams in the Big West and it’s great for our conference.”

They must now wait until Monday, Nov. 12 to find out if they will be one of the 24 at-large bids chosen to compete for the NCAA Men’s College Cup.