Millennials need to vote because it always counts 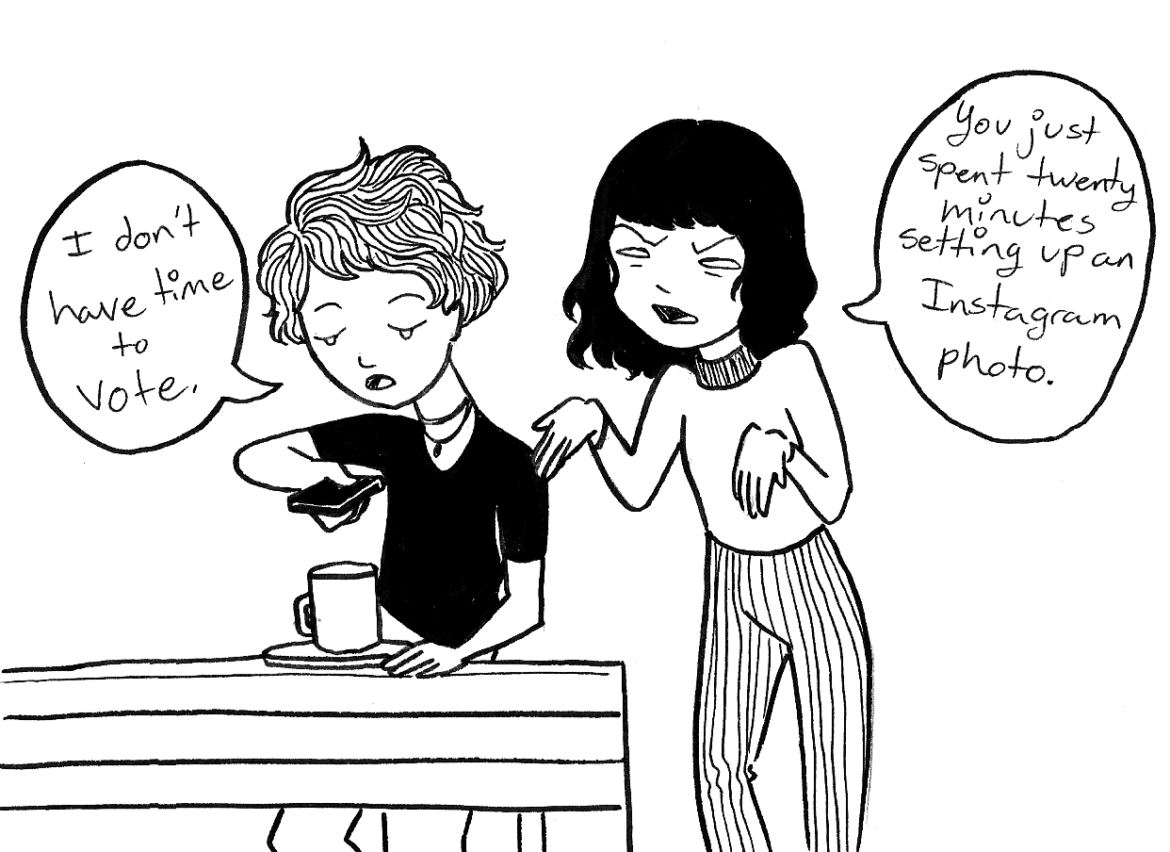 In 2013, Time magazine famously labeled millennials on their cover as the “Me Me Me Generation.” They even went as far as calling us “lazy, entitled narcissists who still live with their parents.” One reporter even referred to Generation Y as “wild, politically disengaged suckers who will fall for any weird fad.”

As the millennial generation, society and media has led us to believe that, in short, we suck harder than a Hoover. It’s never easy to come to terms with the fact that your generation’s only claim to fame is that you killed Facebook and don’t like to vote. But do we have more potential than we’ve been led to believe?

In the days following the 2016 presidential election, CNN reported that more than 8,000 people took to the streets of Downtown Los Angeles to protest the results. Having been there first-hand, I can say the majority of those 8,000 protesters were made up of enraged high school students and 20-something-year-olds that witnessed, for the first time, how corrupt politics can truly get.

How is it that we can protest for hours carrying signs and chanting but can’t drive to the post office every few years to vote? It’s obvious young people care, but like most things that require any effort, voting is an act that most millennials just opt out of entirely.

With the midterm elections just around the corner, we need to vote now more than ever to ensure there are representatives in office that fight for what we believe in, and here’s why.

Millennials Are Growing into the Largest Living Adult Generation

According to Pew Research, during the 2016 presidential election baby boomers made up about 30 percent of the eligible voting class in America. “Baby boomer” refers to those born after WWII where there was a spike in the birth rate in America.

Baby boomers are now made up of people ages 52-70. It is expected that by next year millennials will make up the largest living adult generation in the U.S., which could drastically shift the current political climate of hurricanes and thunderstorms to sunny days and blue skies on Capitol Hill.

I know it’s hard to believe there was a time when we had faith in our lawmakers, but if we vote that reality is not too far off.

The Millennial Vote Could Swing Elections

New York magazine reported that during the last midterm elections in 2014, young people turned out to vote at a rate of 1 in 5. If we could rip ourselves away from binge-watching “Game of Thrones” long enough to change that turn out to 2 in 5, we could have the power to swing any election we vote in.

A trend often happens in politics referred to as the “midterm falloff,” where voters generally participate significantly less than in presidential elections. This phenomenon poses a direct problem to the democrat party this election because it relies heavily on the youth vote.

I know, as a generation, we tend to detest anything that requires us going out in public, but it’s safe to say in this case it may be worth it.

Millennials that don’t vote make the argument that “our vote doesn’t count.” The only way our vote truly won’t count is if we continue to sit at home tweeting about how corrupt the system is while sacrificing our right to vote in silent protest of a government we feel has failed us.

Social awareness has replaced actual civil involvement, and while both are necessary for an ideal democracy, voting is the only way to ensure we see the change we seek.

Trump Has Already Raised $100 Million for Reelection in 2020

A poll conducted by NBC News earlier this year revealed that only 19 percent of millennials approve of Trump and his administration. Trump, however, has no plans of slowing down.

The Hill reported that so far he has raised over $100 million for his re-election campaign in 2020. If you’re like me, you’d rather give up Netflix for life than live through another term where reality show star Donald Trump is president.

His time in office has aged me so much I got called “Ma’am” by a teenager the other day. If the prospect of another Trump presidency isn’t scary enough to have you shaking in your Birkenstocks, then consider the fact that California Governor Republican candidate, John Cox, is endorsed by him.

In the midterms, we will decide whether our next governor is a man who aligns with a president who is trying to revoke birthright citizenship for people from over 30 countries right now.

A report by the ACLU labeled Kansas Secretary of State, Kris Kobach, as “the King of Voter Suppression.” In 2010, he convinced the state legislature to pass a law that required strict ID requirements to vote in Kansas. Later, an investigation revealed the law drastically suppressed votes from newly registered voters and people of color.

At the time, most millennials were newly registered and since we are the most diverse generation, it’s hard not to assume these laws are targeted at us. And like most things, it gets worse.

The Hill reported that President Trump appointed Kobach as vice chairman of the Presidential Advisory Committee for Election Integrity and just requested voter roll out data from all 50 states. This includes information like names of voters, voting history, birthday and social security number.

I’m not saying that a national voter suppression campaign is in the works but if it walks like a duck and quacks like a duck, it’s probably trying to infringe on your civil liberties.

Take a look at what is happening in Georgia right now. According to The New York Times, there is a huge controversy surrounding allegations of intentional voter suppression because over 200 polling places have been closed since 2012, accounting for eight percent of the state’s total voting locations.

Not only that, but Georgia Governor Republican candidate, Brian Kemp, who serves as Secretary of State for Georgia, stalled over 50,000 voter registrations from disproportionately black voters due to alleged problems with voting information.

It’s obvious they’re going to extreme lengths to keep people of color and young people from voting, so in true millennial fashion, let’s just vote because they don’t want us to.

Listen, I don’t want to be all preachy but the fact of the matter is politicians do their best to meet the needs of voters. Since millennials are opting out of this process altogether, we are telling our representatives that we’re happy with how they’re running the show.

Notoriously, our grandparents and parents are the ones who turn up to elections and call the shots that will dictate our future quality of life, while they have one foot in the grave.

Our time is now, so let’s put our $7 avocado toast down for a second and show them what it looks like when millennials run the show.