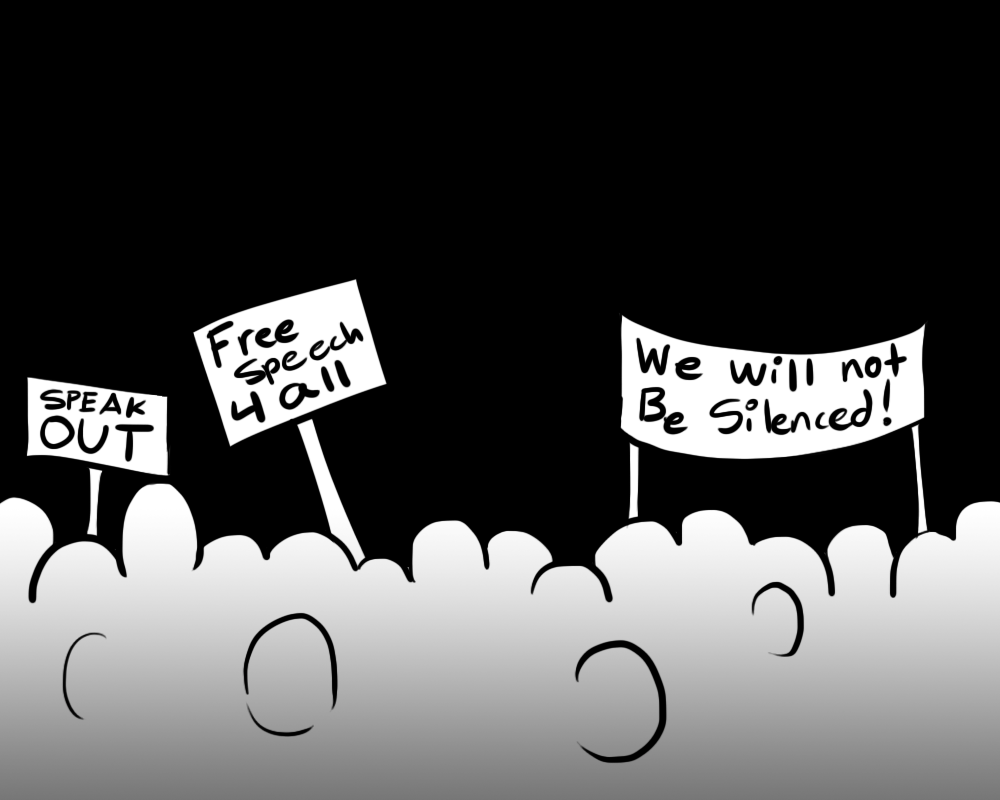 Our founding fathers built this country on freedom and the idea that people won’t be judged by their race or culture, but rather judged by their actions and the meaning behind it. Our society has strayed from those beliefs and forgotten what it truly means to be an American. We live in a world that silences voices that oppose the established hierarchy.

The tight ropes of powerful groups suffocate your throat until the overwhelming pressure to stay quiet enacts fear that if one speaks out, they will be scrutinized. Powerful groups keep their power by oppressing those that challenge the status quo. Racism and corruption have been a part of our history — at one point it was even legal. Today, people are still being silenced for standing up for what they believe in.

As a college student born in America, I have the right to vote and use my voice for change. I have the platform to speak out and represent my immigrant parents who don’t have that voice because of my privilege.

Today we see many other marginalized groups that have come together to act for change and be represented strongly by people with power. We’ve seen many examples of this throughout history and it is happening today more than you realize.

African-Americans are marginalized and oppressed in many ways. We still see traces of racism through police brutality. There have been many recent killings by law enforcement of innocent or defenseless African-Americans.

In August of 2016, football player Colin Kaepernick sat down during an NFL preseason game. He said, “I’m not going to stand up and show pride in a flag that oppresses black people and people of color.” He didn’t protest the military or shed hate on the troops but surprisingly, primarily white people shouted, “You hate America!”

Donald Trump responded with, “Not at a football game, find another way to protest, stand proud, or be suspended without pay. You’re fired!”

Alternatively, Barack Obama responded with: “We need to be respectful and listen to each other because we fight for our rights to voice our opinion. This is the only way we can make our democracy work.”

Out of the two, I prefer Obama’s ideology. Kaepernick is just another of thousands of activists who have been criticized by pissed off, ignorant people that believe America is the perfect example of justice. The bystanders are sipping their drinks while judging the peaceful actions of victims that just want their voices heard.

Athlete icon LeBron James, along with other basketball players, voiced their opinions on the racial divide in our country during the 2016 ESPYS. As the renowned best player in the world, James used his wide platform to represent issues larger than himself. In an interview, he spoke on politics, President Trump and the difficulty of being a black man in America.

Journalist Laura Ingraham on her Fox News program said, “It’s always unwise to seek political advice from someone who gets paid $100 million a year to bounce a ball. Keep the political comments to yourselves. Shut up and dribble.”

After this, James got major support from the NBA and produced his own documentary to raise awareness of black issues, titled “Shut Up and Dribble.”

If popular celebrities get silenced, can you imagine what everyday people experience? Who will speak up for them?

Recently, the CSUN administration told their students that Section F courses, including culture, gender and women’s studies, would be removed from the curriculum due to Executive Order 1100. Essentially, our lawmakers told students to shut up and study.

The cumulative student voice is important because when united, we hold real power for change. We must unite because individually we don’t have the platforms that James or Kaepernick have. It’s easy to blind and mute ourselves due to fear of backlash. Criticism will arise, but it’s time we lift off the pillows that muffle our faces, take a breath and stand up to the silencers.

The impact of silencers goes beyond pop culture and into politics. Keeping a pillow over our voices will affect our laws and the leaders who run our country.

The “exact match” policy means that a simple typo or missing hyphen could put voters on hold. The policy could have been deemed beneficial to simply confirm the identities of voters come election day.

Civil rights groups such as the NAACP of Georgia are filing a lawsuit to disregard the “exact match” policy that disproportionately afflicts voters of color and makes voter registration for these groups strenuous and difficult.

So why is it that only Georgia has this law and 70 percent of the holds are black people? Coincidence or intentional suppression, you can see that the black community is being silenced by powerful politicians that enact laws to keep them quiet.

This controversy with Kemp and his office is happening right in the middle of a close gubernatorial race. Kemp represents the republican party, while Stacey Abrams represents the democrat party and the first black woman nominated as a candidate for governor. The black community can come together to vote for a governor that will support them.

However, African-Americans of Georgia might not be able to vote for their leaders because of these laws that prevent them from exercising their rights. Powerful groups stay dominant unless we as college students represent the groups who have had their voices taken.

We don’t want this to happen to our communities. All we need to do is vote. Not doing so would be taking for granted the privilege we have to change the world.

Considering these examples, I encourage everyone reading to do some self reflection on themselves and the world around them. Notice if in your day-to-day experiences, how often your voice is silenced or taken for granted.

If you don’t like what you see, go enact change in the world. Vote for your representatives and use your various proactive platforms to voice change. At the very least, aspire to inspire others. Vote for those falsely incarcerated who can’t.