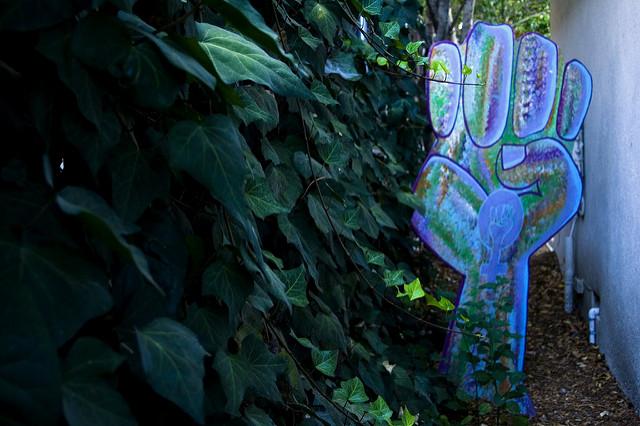 Behind the Women's Research and Resource Center sits a painted fist alone in its solidarity. August 25, 2009. File Photo/The Sundial

Home of the oldest operating women’s center in the CSU system, CSUN celebrated the 45th anniversary of its Women’s Research and Resource Center (WRRC) at the 13th Biennial Phenomenal Woman Awards on Sunday.

The event also commemorated the 25th anniversary of the Gender and Women’s Studies Department (GWSD) amidst growing controversy for the comparative culture studies general education requirement at CSUN.

“For an event like this, it allows us to remind people that this is great work that’s being done on campus,” said WRRC Director and Phenomenal Woman Awards coordinator Shira Brown. “This is Section F work. We’re a Section F department. The work we’re doing is important, and it’s meaningful.”

Every other year, the WRRC and GWSD work collaboratively to host the Phenomenal Woman Awards to honor women in the Southern California community who have demonstrated acts of social activism, academic rigor, or historical commitment to justice and equality.

This year, five women were celebrated for their work in their respective communities: Melina Abdullah as a scholar and leader of the Black Lives Matter movement, Judy Baca for her role as an artist-activist with projects like The Great Wall of Los Angeles, Sue Dunlap who serves as the president and CEO of Planned Parenthood Los Angeles, Sandra Harding as a feminist philosopher and distinguished academic researcher, and Nayereh Tohidi as a social and political advocate as well as founding director of Middle Eastern and Islamic Studies at CSUN.

CSUN professor and co-emcee of this year’s Phenomenal Woman Awards, Jennifer Berry, believes the recognition of these women and the event itself “sets a precedent that we are needed, that women’s visibility is needed. We are doing incredible things, and we need more and more people to know about them.”

At CSUN, the event was held during a pivotal time for GWS and ethnic studies programs on campus as the Faculty Senate deliberates on their options surrounding the implementation of Executive Orders 1100 and 1110-R which includes Section F.

“The Executive Orders would deeply affect our department,” said GWSD Chair Dr. Breny Mendoza. “It’s really not an exaggeration to say that if it would be passed just like it is today, we would be eliminated. In three to five years, we would not look like we do right now. We are fighting to bring some reason back to this system. I don’t think we’re being heard frankly.”

Born out of activist movements, departments like GWS are using events like the Phenomenal Woman Awards to advocate for their importance with a nod to their founding.

“For us, it’s just another way of saying we’re here, we’re not going anywhere, we don’t intend to go anywhere, and you can’t scare us into the closet,” added Brown. “In fact, chances are we’re going to get louder the more we’re pushed.”

As the event coordinator, Brown worked with other faculty and students to host the event and silent auction, as well as garner sponsorships as the main fundraiser for the GWSD and WRRC.