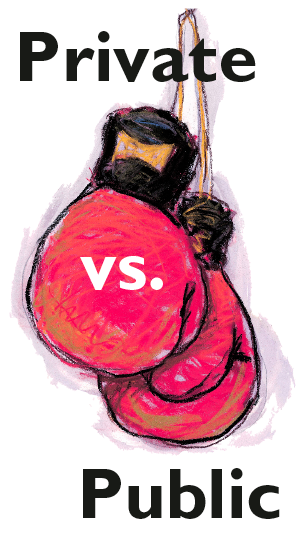 The choice between public and private education is always considered when researching the best colleges and universities. California State University students have been sold on the idea that one can receive a quality education at a public university without having to shell out more than $25,000 for a private education.

There is no argument that public is less expensive than private, especially if they are relying on loans to pay their way through college, but the California legislature’s decision to cut funding for higher education undermines the quality of the education students will receive in the coming semesters.

Classes and financial aid have been cut, teachers are being forced to take furlough days and prospective freshman and transfer students are being turned away from the CSU.

Private universities on average have raised their tuition on an average of four percent in reaction to the economic climate, according to the National Association of Independent Colleges and Universities.

Well, it has to be taken into account that one will now pay $38,570, before living costs, for a University of Southern California education, as reported by the Los Angeles Times.

On the other hand, USC will increase money available for financial aid by eight percent, again reported by the LA Times.

This trend has been similar among other private universities across the nation, a stark contrast to the situation of public universities in California.  The CSU raised student fees by a total of 32 percent for the coming school year and cut it’s overall budget by 20 percent.

For students currently attending CSUN, signs of the budget cuts have already hit, as described in the July 3 Daily Sundial article “Budget cuts unexpectedly take away classes that students need to graduate.”

A report published in November called “College vs. Employment” argues that during times of a recession, schools should expand higher education opportunities to prepare the workplace for boom times. The end of the budget crisis, and recession, will require qualified people to lead in their respective areas.

This has caused me to ask myself this question: Why did I go to a school in the CSU system in the first place?

Private universities have the capacity to make smaller class sizes and enough classes to satisfy the student population. CSUN students’ consistent problems are class sizes and the number of classes available. These annoyances prolong graduation and patience, and can make a person think about that road not taken.  Yet, the main reason a public education is preferable is that public is not as expensive as private universities.

If a person was lucky enough to land a scholarship that pays for your entire tuition, like LMU and USC offers, well, that’s good for you. The rest maybe weren’t so lucky and had to apply and hope to get a subsidized loan.

Hanging out at USC’s Annenberg School for Communication just sounds nerdgasmic. But it’s the professors at CSUN that keep inspiring me to do better.

A highly paid teacher at a private university may be equally qualified and inspirational to teach a class of eight students, yet a professor at CSUN needs to manage the same level of quality with a larger volume of students.

Do they succeed? In my experience, the majority of time they have.

One area that I have alluded to is the make-up of the student population. I wouldn’t give up one of the most diverse public colleges in the nation for a private school that caters to the silver spoon doctrine.

I’m still a believer in the CSU system providing a good education. I wouldn’t want to be anywhere else.

I even decided that I would declare a minor on top of my double major. An anomaly status, but I’ll take the risk of advancing my education than worry about when I will get dropped from my subsidized loan because I logged on too many units.