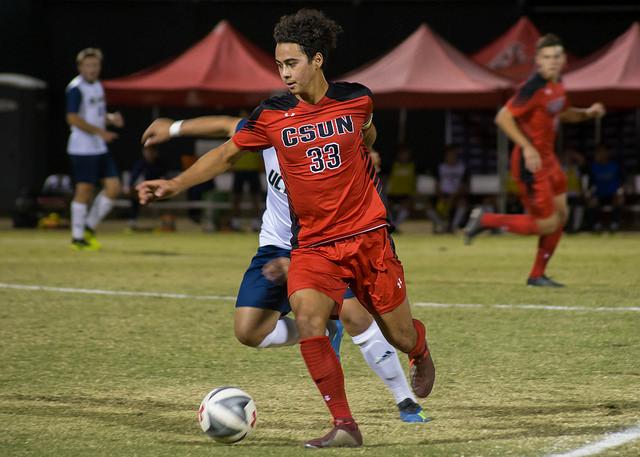 It was a blazing hot Sunday afternoon on Sept. 2 and the men’s soccer team was winning 3-1 at home over Utah Valley with nearly 30 minutes left to play. Then, something happened, something that hadn’t happened in three years at CSUN.

Sophomore Daniel Trejo latched on to a through ball by senior Michael Flores and scored to make it 4-1, finishing off the first CSUN hat trick since 2015.

The talk after the game was about Trejo and his extraordinary feat, but that may not have been the most memorable moment of the match.

That moment came right after Trejo scored his third of the night, when senior midfielder Andrew Rizeq came running from the other side of the pitch to be the first player to congratulate Trejo on his fantastic feat.

That moment is what defines Rizeq as the captain of this team. He isn’t the flashiest player on the team and his work as a midfielder is often overshadowed by what the forwards do in front of him, but this team would not be the same without his presence.

“He’s so reliable. He’s continued to be more and more reliable as every year goes by,” assistant coach Zach Feldman said. “Whatever is needed, he’s just always there to take care of business. On and off the field, he’s such a good role model for our team and for our whole athletic department.”

Feldman would know more than anyone what kind of person Rizeq is after coaching him at the Real So Cal soccer academy during his senior year of high school. That year, Feldman’s U-18 team was ranked eighth in the nation, with Rizeq starting in 26 of the 38 games he played.

That experience was so impactful for Rizeq that he made the choice to go to CSUN over other schools like Cornell and San Jose State, due in large part to the way that Feldman coached and treated his players.

“We beat all these teams and we did super well, and we had a good style of play so I was like ‘Wow, if Zach is coaching academy and he’s also at Northridge, I bet it’s going to be kind of the same type of level and same type of style of play,’” Rizeq said.

Head coach Terry Davila was very interested to see what Rizeq could do at the college level after seeing “his work rate and dedication to the team” at the academy level, but he wasn’t given a starting spot, or even a role in the team, during the first two games of his freshman year.

Rizeq took this as a sign that he would probably get redshirted, though this wouldn’t have been a bad thing in his eyes.

“I was like ‘okay, I’m probably going to get redshirted,’” Rizeq said. “But then I was like ‘it’s ok. That will give me more time to train and weight lift and get better for next season.’”

That idea was quickly squashed when Davila told Rizeq that he needed him to shore up the midfield, and from there Rizeq became an integral part of the team, starting in 10 of the 16 games he would appear in during his freshman year.

“He just knew where to be, and he was very coachable,” Davila said about adding Rizeq to the starting lineup. “He’s very disciplined positionally and you know what he’s going to give every single game.”

That skillset gave Davila the confidence to not only make Rizeq a starter, but to make him the team’s captain after his sophomore year, something he struggled with initially.

“At first as a captain, I wasn’t as loud, and I wasn’t as assertive, which I think is kind of normal when you first get it,” Rizeq said. “But as college went on, I got more mature, and I wasn’t afraid to be assertive and be loud and say what I got to say.”

Being more mature is what Rizeq credits for being able to handle being the leader of this team. His parents moved to Texas just before he started college, and after having them by his side throughout his childhood, he was alone for the first time in his life.

Some part of him really enjoyed this freedom, but then after a couple months at CSUN, the reality set in that his parents were no longer there to be his support system like it was growing up. He was still able to call them every day, but only seeing them twice a year took a toll on him.

“I had no problems, but I really started feeling homesick for the first time,” Rizeq said.

It wasn’t until his sophomore year that he really understood how to manage his time correctly and give equal time to both his school work and soccer, something he sees as a problem for every Division I athlete.

“The biggest challenge was balancing soccer and school,” Rizeq said. “During the spring, I put more of my focus in school and then I realize, me competing on the field, I’m not playing as best as I can be, as I do in the fall. Because in the fall I’m more focused on soccer but then my school is affected.”

After going through those trials and tribulations, Rizeq feels it is important for him to help his teammates not only on the field, but off of it as well. He has taken a liking to sophomore sensation Daniel Trejo, whose 10 goals this year leads the Matadors.

“Trejo and I are pretty close,” Rizeq said “I see a little bit of myself in him because of how hard he works and his work ethic. And I always try to give him tips just about time management and we always talk about the games because we both really want to win.”

Another piece of wisdom that Rizeq hopes to pass on to Trejo and the rest of the team is the idea of working out right and eating right.

As a kinesiology major, Rizeq has learned just how important it is to keep your body in the right shape to be a Division I athlete. His knowledge of the body has become so adept that he leads the stretching and recovery sessions for the team, as well as tell people when they are doing something wrong, such as when he caught someone pushing too hard while stretching a cramped leg.

“One of our players got a cramp in his leg and one of our players was stretching it like really hard, like pulling his leg all the way back, and I was like ‘no. You gotta lightly stretch it,’” Rizeq said. “So I actually went over there and did it myself.”

Rizeq can also give a helping hand to Habib, the athletic trainer for the soccer team, such as when he was able to tape goalie Henrik Regitnig’s ankle.

That deep knowledge and passion for the human body has gotten Rizeq thinking about what life could be like after soccer.

“The first goal in life is to be a professional soccer player. It’s a dream, which would be awesome. But of course, you need a plan B, and lately it has been going to grad school to become a physical therapist,” Rizeq said.

That idea has been in his mind for a couple years now, but after taking time off this past summer to travel to Barcelona, he has come to the realization that that may not be what he really wants to do.

“I think I’d want to be a personal trainer and open up my own gym,” Rizeq said. “I think I’d be more passionate about that, helping others. I’m really in to nutrition too. So basically just like personal training, nutrition, like improving people’s lives I guess.”

Rizeq may have already started improving lives, taking it upon himself to help the international students on the team to adapt to the culture in America. He has lived with those coming from other countries since he was a freshman and is continuing the tradition today.

“Since I’m the only one really from Southern California, I kind of show them around everywhere nice to see here,” Rizeq said. “But then in return they always give me their culture and it’s really cool to learn about their culture and where they’re from.”

Rizeq especially leaned on his roommates when he took his trip to Barcelona this past summer, an experience he described as “pretty cool.”

“It was just how different the culture is there,” Rizeq said. “I feel like in Spain it’s like the whole city is together as one. Everyone’s friendly and bottom line it’s just the culture. Everyone seems so happy.”

Happiness is not always easy to find, especially in the grinding environment of a Division I team, but Rizeq tries to find it whenever and wherever he can. Whether it’s taking a drive to the beach or just hanging out with his roommates, he is always looking forward to “having a laugh” to get his mind away from the stress.

After four years of being a part of the CSUN men’s soccer team, Rizeq has left a lasting impression on the program, his teammates, and above all, his coaches.

“He leads by example and he constantly does the right thing,” Feldman said. “He’s a good decision maker on and off the field. He puts the right food in his body, takes care of his body, makes sure the guys are doing the right things off the field. He’s just got it and whether he’s wearing the captain’s armband or not, that’s just his personality. It makes no difference. He would act the same way if he were the captain or if he were the freshman. That’s just in his nature”

“I don’t even think about him being gone, so I don’t go there yet. It’ll be sad for me, so I don’t want to think about it,” Davila said. “He never overreacts. He supports everything. He’s a great listener. He thinks before he talks and he’s just a very good human being. I mean it’s just Andrew being Andrew. Andrew’s perfect.”