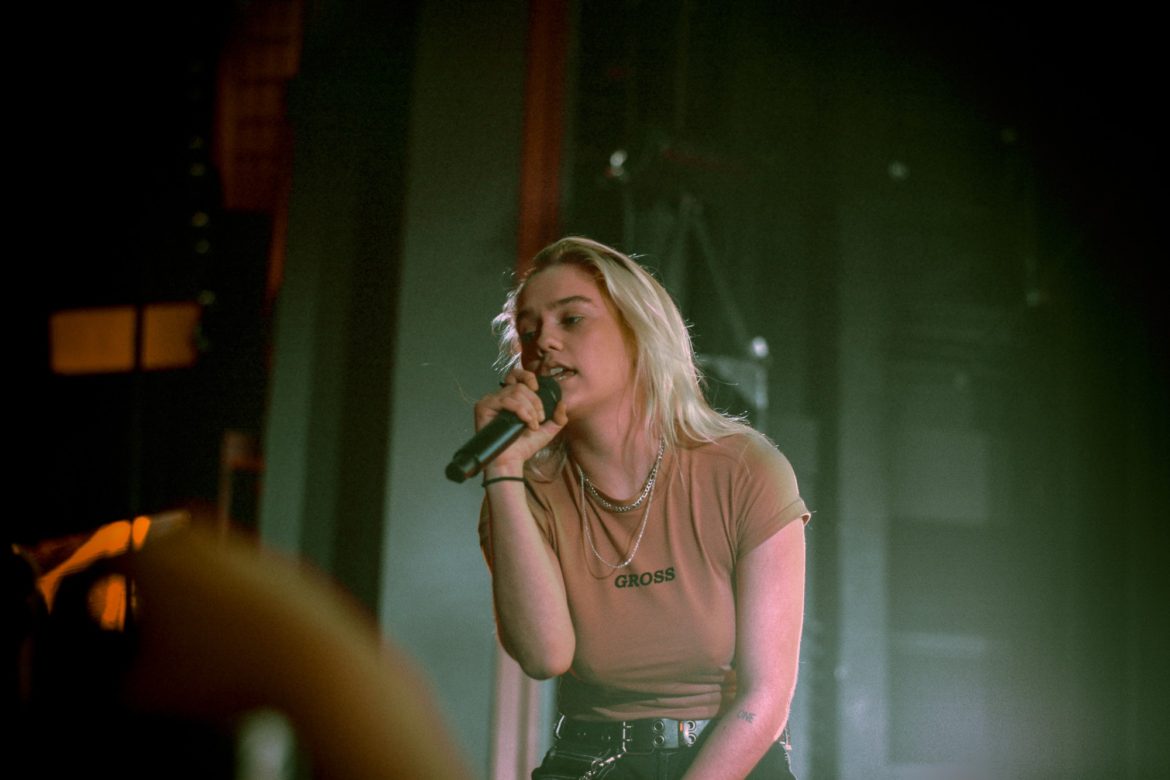 Carlie Hanson performed her hits "Why Did You Lie?" and "Only One." She opened for Troye Sivan's "Bloom" Tour at The Greek Theatre on Tuesday, October 30. Photo credit: Joshua Pacheco

Eighteen-year-old Carlie Hanson has experienced a speedy rise to fame. Coming from a rural Wisconsin town of 15,000 people, Hanson has fruitfully accomplished a lot in 2018. Her first singles, with noticeable pop influence and electronic production, have reached a staggering 46 million streams on Spotify.

As she’ll proudly tell you, not too long ago she was working at a McDonald’s drive-thru but just last week she played one of Los Angeles’s most legendary venues, the Greek Theatre.

“This is the show that everyone’s been talking about,” she said. “This morning I woke up and went straight to the coffee. I’m feeling very jittery and very excited. I’m not nervous anymore which is good cause I used to get nervous before shows but now I’m just full of energy.”

Hanson had known she wanted to get out of her small town, recognized for its wealthy and upper-class demographic. “I come from a small town and half of it is full of these filthy rich people and that’s the kind of kids I went to high school with,” she said. “They were the got-everything-handed-to-them type kids.”

“Outcast” might be the wrong description for Hanson, but the desire to explore outside of her town evidently helped her find her place in the world.

“I didn’t like school and I’ve always wanted to get out of Wisconsin,” she explained. “Now that I live (in Los Angeles) I always miss home life, it is so much different. I miss driving around with my friends and now I kind of miss school as weird as that is to say. I miss the fun parts of it.”

Hanson is your typical 18-year-old girl with typical teenage thoughts and ideas. So much so that her love for Justin Bieber and her admiration for YouTube stars is precisely what led her to her position now.

“I remember watching Justin Bieber’s videos when I was 9 or 10 and I just dreamed of doing what he was doing because he was so young and was reaching out to so many people,” she said. “Since then I wanted to be a singer.”

This past summer, Hanson joined YouTuber turned pop star Troye Sivan and singer Kim Petras for the North-American leg of the Bloom tour. “I used to watch Troye’s YouTube videos and I remember when he put out his first single, ‘Happy Little Pill’ and I loved it,” she explained.

Hanson and Sivan’s collaboration came naturally. As a friendship primarily, they linked up whenever they could. Sivan was the mastermind behind the cover art for “Only One” and “Why Did You Lie?” Needless to say, Hanson was next in line to join the Bloom tour.

At a young age, Hanson has experienced more pressure than most 18-year-olds. The pressures of societal standards can make or break any young and impressionable mind.

“Don’t take people’s negative criticism, do what you want,” Hanson said. “That’s how I got here. I never changed for anybody and it’s the same cliche sh*t everyone tells you, but it is the only thing that works. Always go with your gut and do what you want.”

Hanson opened the Greek Theatre show for a crowd of 5,000 people with her first ever major single, “Why Did You Lie?” The single is the central sound for most of her work. It carries a luscious dance-pop sound with repetitious lyricism that details a scenario where a boy has made a promise and then has failed to keep it.

The highlight of Hanson’s performance was the song “Hazel,” which I am confidently assuming is from her upcoming EP. She described the song as slow, sad, and said it was written about a friend from back home. “Hazel” is arguably Hanson’s best work. There is less of a focus on complex electronic beats and more of an isolation on raw vocals. The combination of drums and electric guitar during the song’s chorus makes for a great sound, and I am excited to hear more of the EP.

Listen on The Sundial’s Spotify.