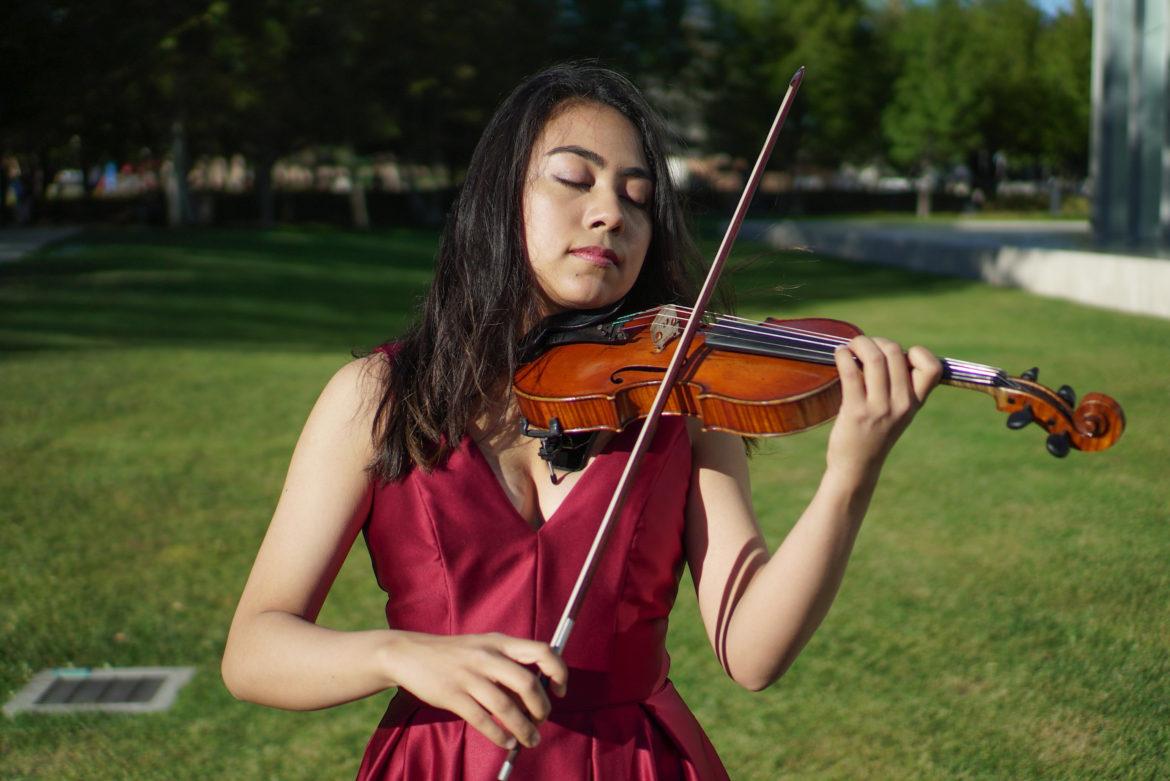 Alisa Luera, 19-years-old, is the youngest student to hold the title of first violinist in the Honors String Quartet. Photo credit: Leo Moneymaker

At 19 years old, Alisa Luera’s success has paid off as she has become one of the youngest students at CSUN to hold the title of the first violinist in the Honors String Quartet.

Mentored by her mother who has played the piano since high school, Luera learned how to be independent and detail-oriented when it comes to music in order to make a career of coaching young students and performing for entertainment recording studios.

“I’m still hard on myself,” said Luera. “Even if people clap, I still critique myself and the way I played. The most important part of the performance is not me, it is the audience.”

With 15 years of experience, Luera was able to add the Honors String Quartet to her resume this year, a unique accomplishment achieved mostly by students pursuing their master’s degree.

Being accepted into the quartet at a young age was not an easy achievement. She practices a minimum of five hours a day cumulatively through individual study and multiple programs that she has been involved with throughout the years.

In 2011, Luera started playing with the Los Angeles Youth Orchestra which gave her the opportunity to work with Disney XD, the Foo Fighters, Tony Visconti, Shari Sutcliffe and Dave Grohl.

For Luera, each opportunity opened up a new experience. Disney XD was her initial commercial job and working with the Foo Fighters allowed her to record in a studio for the first time.

The Los Angeles Youth Orchestra also gave her the chance to travel to Switzerland, Italy, Budapest and Prague. Luera also went to Vienna, the capital of classical music, to learn more about classical music from teachers who grew up in a culture where classical music is the norm.

There, she was able to compare music in the United States to music in Europe.

“I think being in LA, the buildings are so modern, they don’t exactly have the best acoustics,” said Luera. “But the sound quality when you play an instrument (in older historic venues), it just makes everything a hundred times better. It is just like, wow! Back in the day, they really take care of how the sound should really be.”

During her sophomore year of high school, Luera merged paths with CSUN Professor Lorenz Gamma, who helped her become more serious with music. Four years later, Gamma has proven to be one of the foundations for her success at CSUN. Adjusting to Gamma’s teaching style as a freelance violinist, Luera has been seeing a huge improvement with herself and how she plays from year to year.

She knew that in order to keep up with other musicians in the music industry, she had to work hard and not let any opportunity go to waste.

“I guess I made myself stand out because I’m not really here for just playing around,” Luera said. “I really want to work hard and be a good violinist cause I know I’m really behind compared to the rest of the music world.”