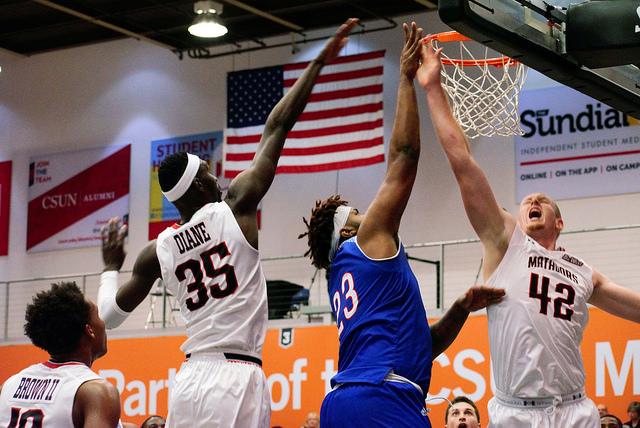 The men’s basketball team secured their first victory of the season with a 80-77 win over the Tennessee State Tigers.

The dynamic duo of Terrell Gomez and Lamine Diane did most of the heavy lifting for the squad, as Gomez had 22 points and three assists while Diane registered 29 points, 12 rebounds, and three assists.

Both Gomez and Diane got going early and each totaled 16 points in the first half.

Cameron Gottfried, a graduate student playing out his final year of eligibility, would play a significant role in staving off the comeback from the Tigers. Gottfried used his cool composure to play his role, and give advice when needed. He would finish with seven points, nine rebounds, four assists, and two steals.

However, a recurring theme throughout the season has been allowing second half comebacks. Coach Mark Gottfried doesn’t seem too concerned as it is a young group that he is working with.

“When you’ve got so many young guys it takes some time to learn how to win. Hopefully tonight was a step in the right direction, they learned how to finish it at the end,” said coach Gottfried.

Bench production has been a problem the first three games for the Matadors, however the Matadors may have shored up their rotation tonight.

Orr certainly was ready to step up when his number was called.

Orr entered when the Matadors were down by five to Tennessee State and provided the interior defense that was crucial to turn the tide. When he went back to the bench in the first half the Matadors had secured the lead.

Orr would finish with six points, one rebound, one steal, one block, and an assist in 15 minutes.

Another huge momentum boost for the Matadors was the return of Rodney “Rocket” Henderson.

Henderson played in his first game this season and didn’t show any hesitation. After a slow start, “Rocket” finished the game with nine points and three assists.

The Matadors, now 1-3, will travel to face the Washington State Cougars on Tuesday, Nov. 27 before heading home for a game against Sacramento State on Saturday, Dec. 1 at 7 p.m.