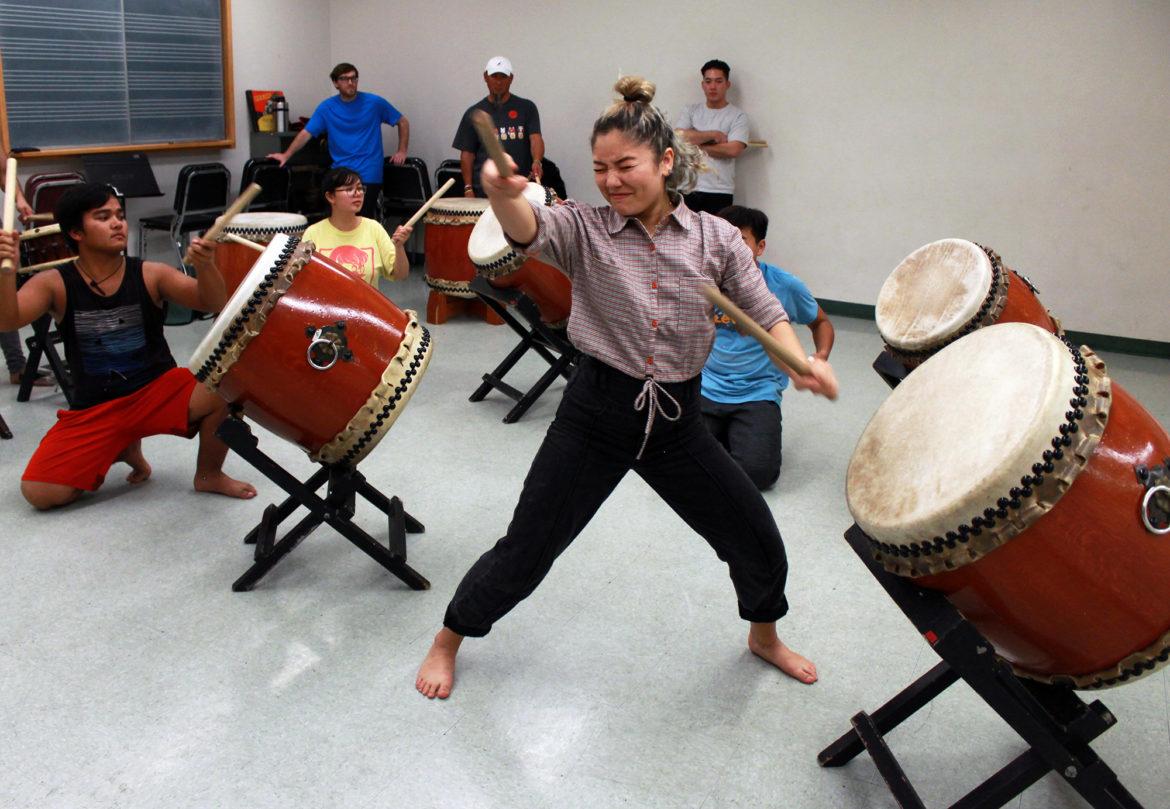 20-year-old Laura Perez, a Junior, puts her heart and soul into practice Thursday night on Oct. 25, 2018 inside Cypress Hall 145. Perez has been a member for two years and initially joined to get in touch with her Japanese roots. She considers Jishin Taiko, "a club that evokes in me an eclectic range of emotions that I’ve never felt before." Photo credit: Clare Calzada 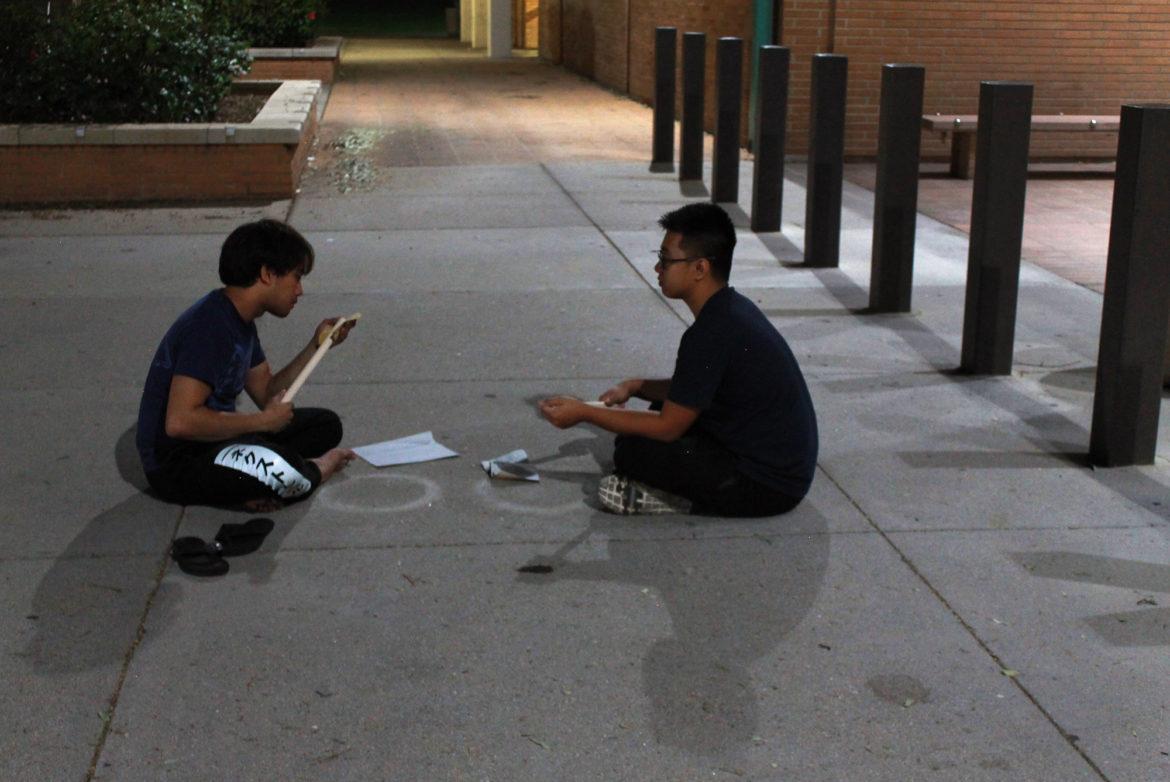 Secretary Ian Flores (right) and a club member Patrick Ranada, a Junior, sand down Bachi outside Cypress Hall on Oct. 17. Each member makes their own Bachi, or drumstick, as part of initiation. Photo credit: Clare Calzada 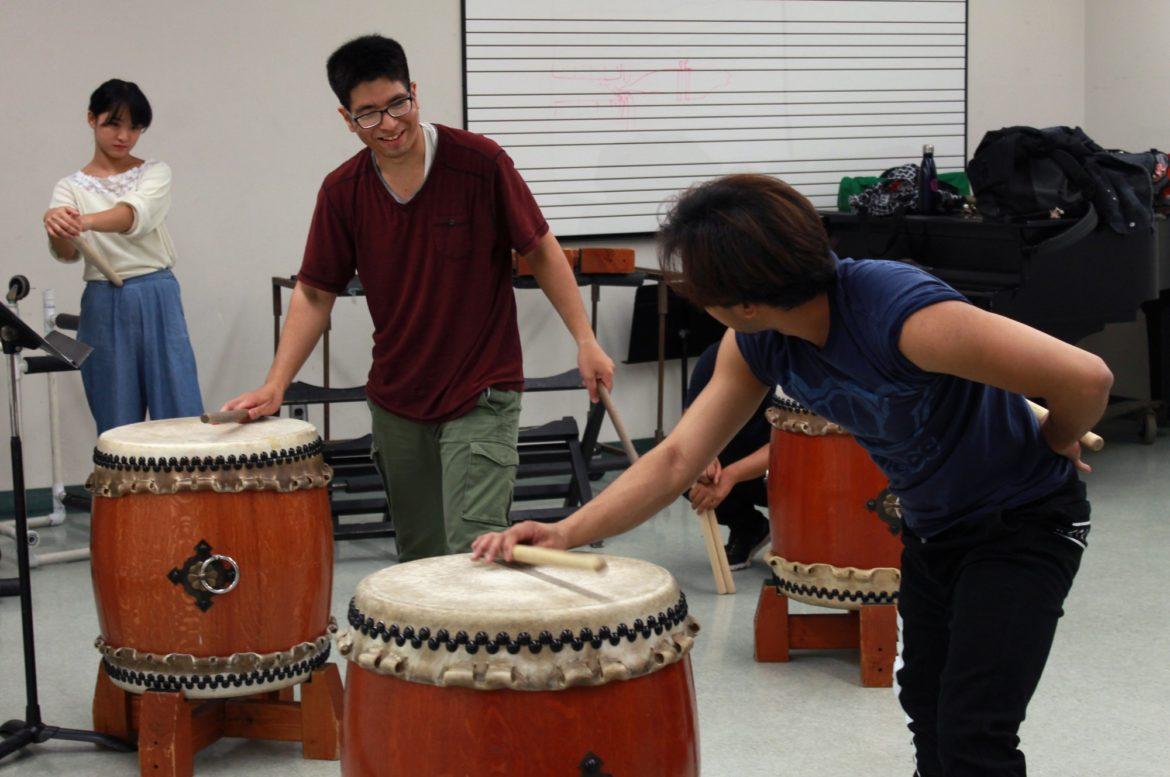 Club President Fumito Azama (left) and Ian Flores (right) rehearse inside Cypress Hall 145 on Oct. 17. The types of Nagado taiko drums they are playing on are Beta, or flat style drums. “Matsuri”, which means “festival” in Japanese, is one of the first songs they teach new members every year. This song is usually played in a swing beat on Naname, or slant style drums, but with so many new members they used Beta instead. Photo credit: Clare Calzada 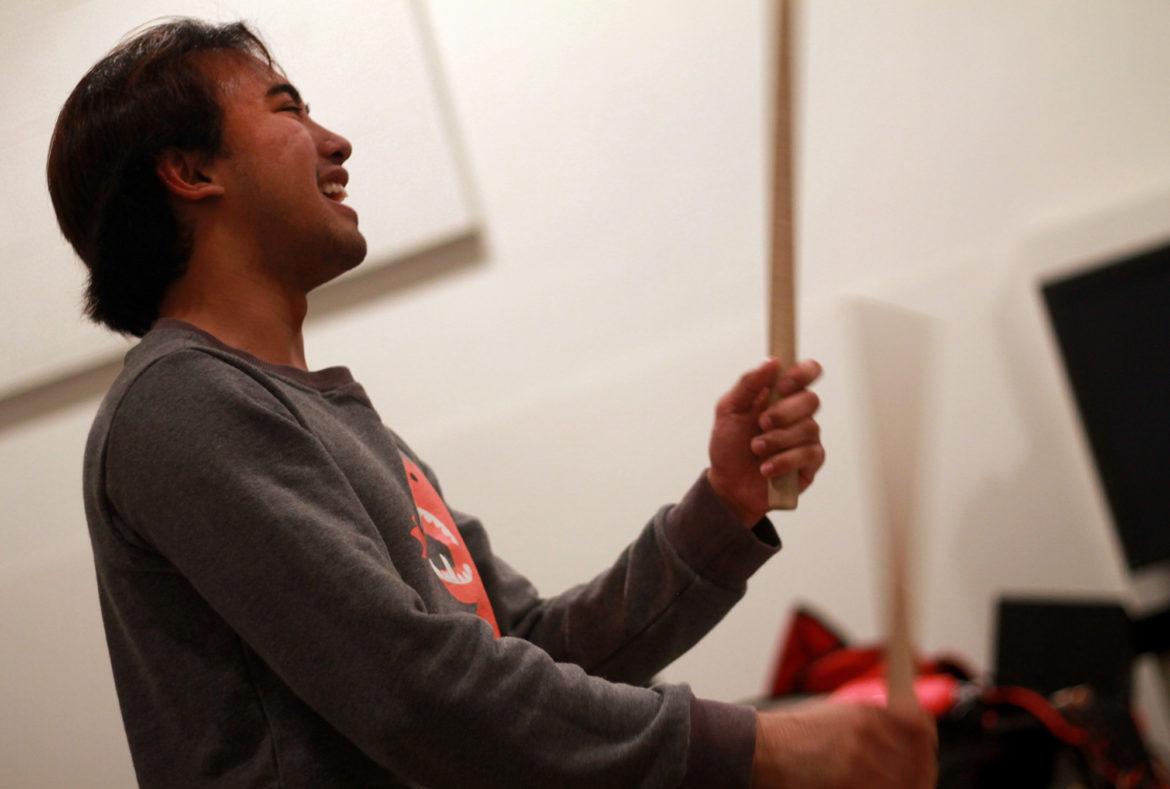 22-year-old Ian-Erik Flores leads rehearsals inside Nordhoff Hall 106 on Tuesday, Oct. 16. He’s been a member for five years, as long as he has been a CSUN student. “This club means a lot to me, it is now something with greatsentimental value. The members are like my second family,” said Flores. Photo credit: Clare Calzada 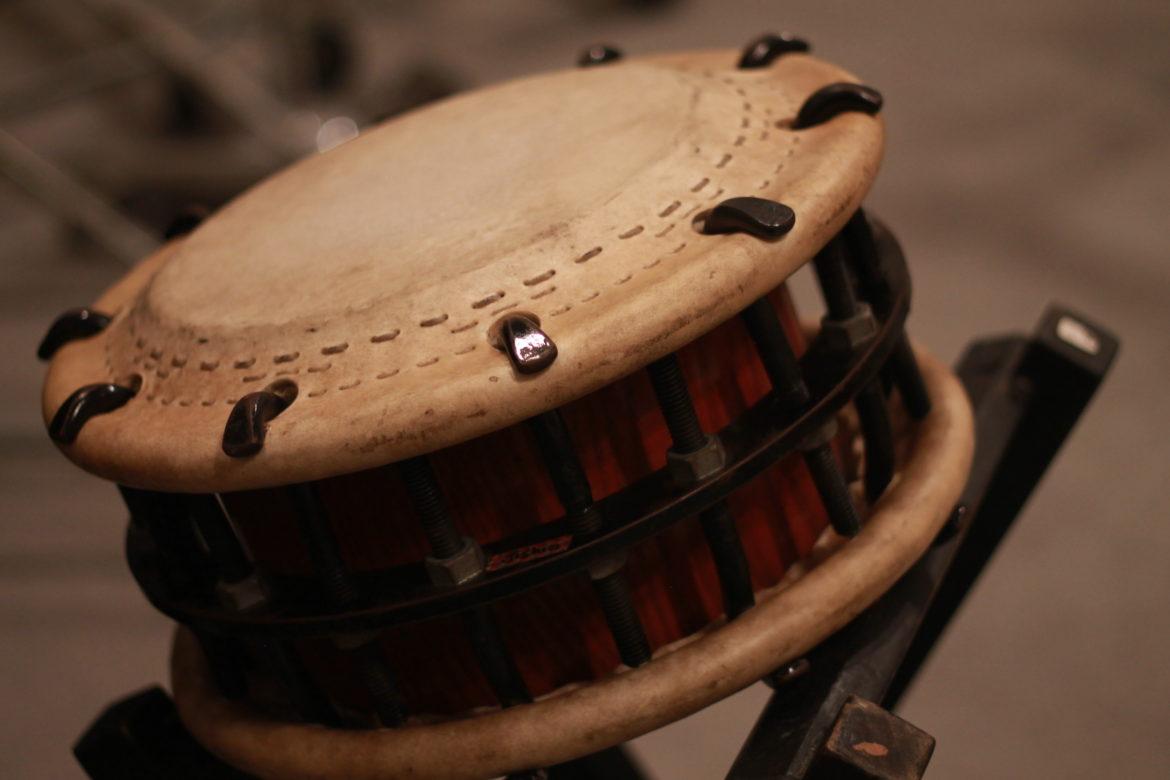 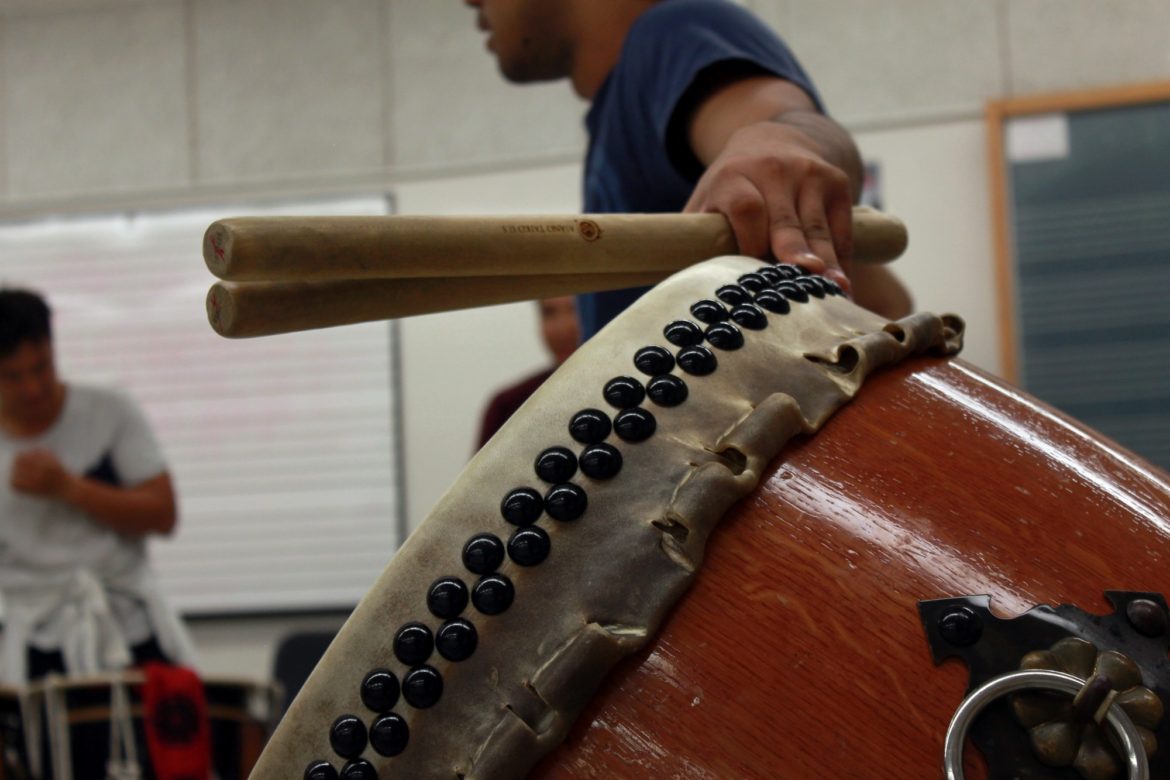 Ian-Erik Flores rests beside a drum during weekly evening practice in Cypress Hall. Besides the drums, everything is handmade including Bachi and the drum stands by members and Ric Alviso, the Taiko Drum Ensemble Advisor. Photo credit: Clare Calzada 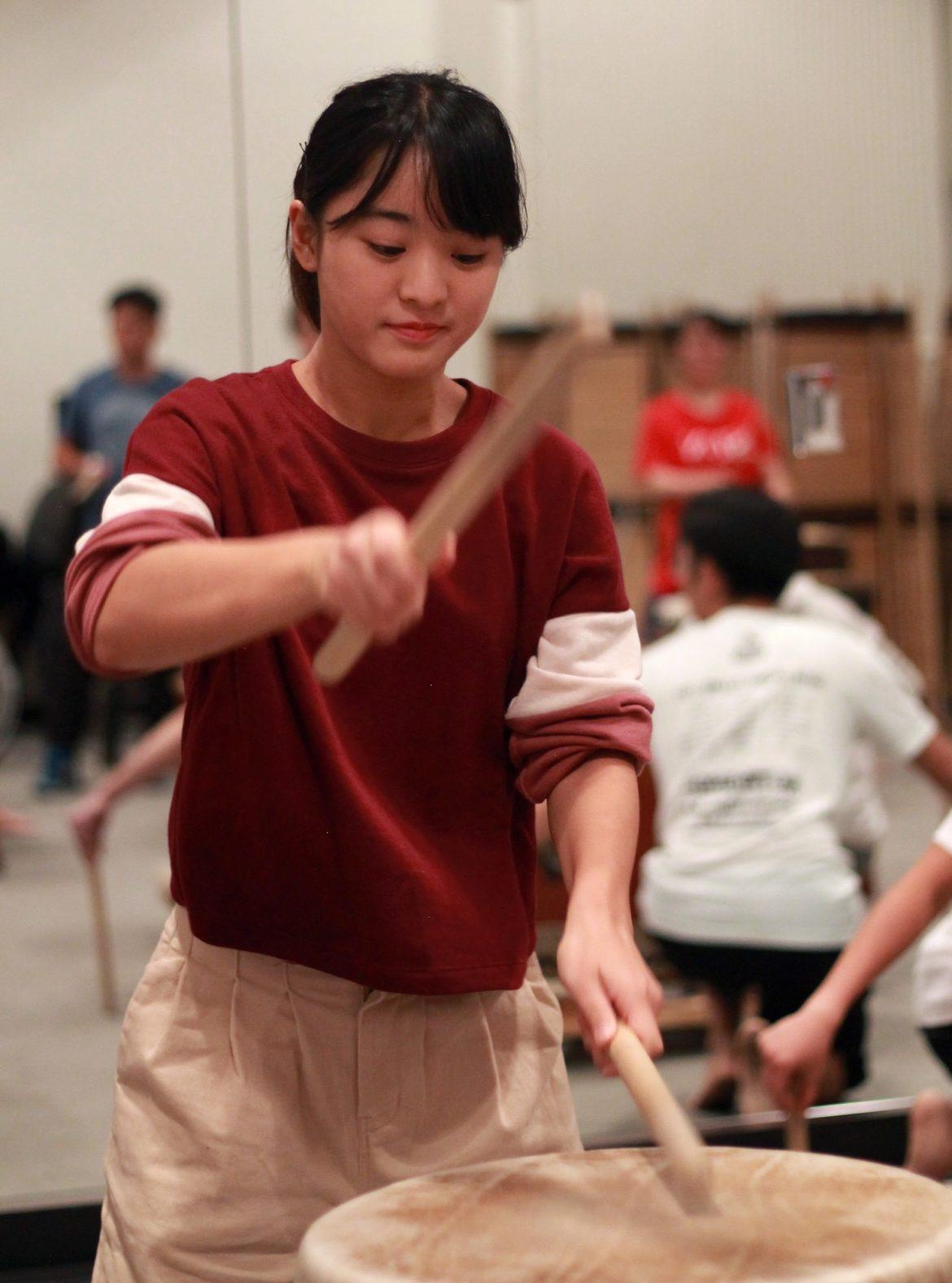 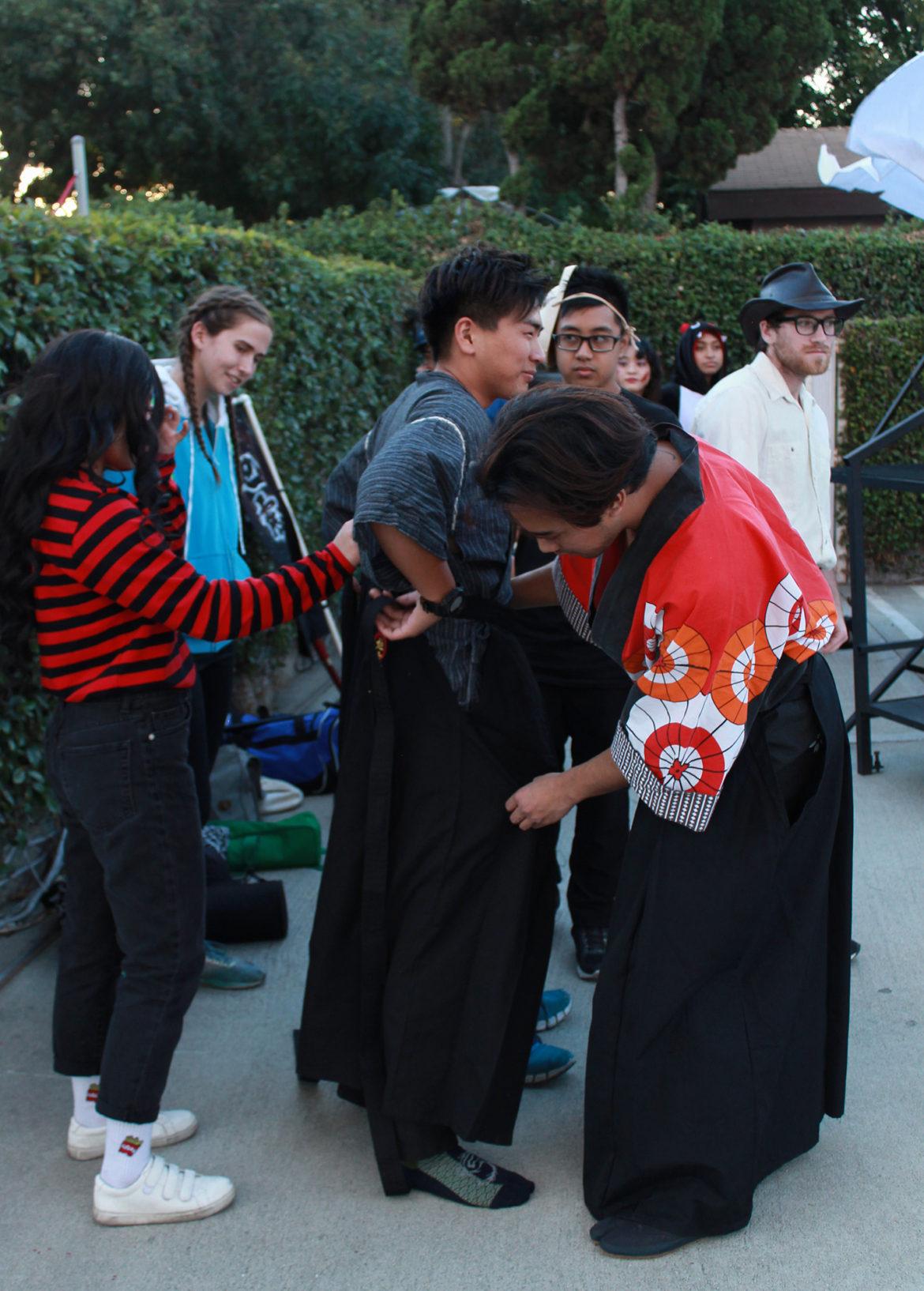 Ian-Erik Flores (right) assists Yohei Nagao (center) into his costume before the performance on Wednesday, Oct. 31. They are both wearing, Hakama, a type of traditional Japanese clothing. “We pretty much just pieced the outfit together and called ourselves samurai,” said Flores. Photo credit: Clare Calzada 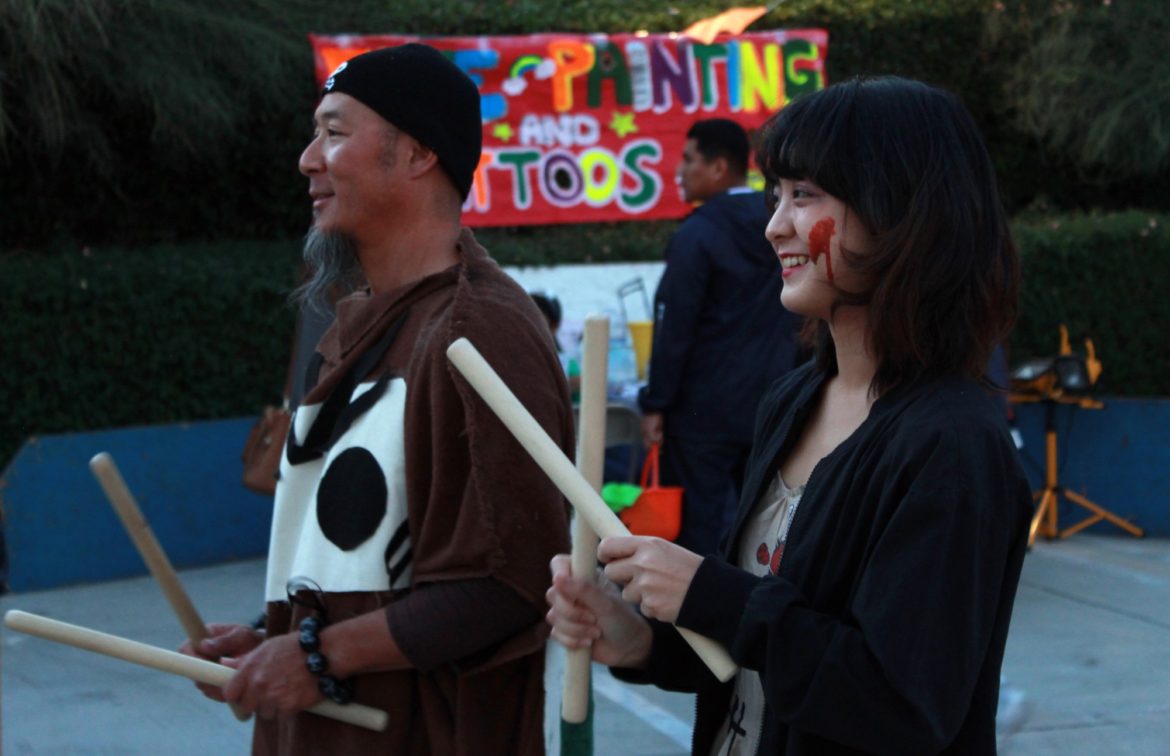 Members Tim Komori (left) and Momoko Hirayama (right) fire up the audience before going onstage during Wednesday’s performance at the Community Christian Alliance Church family fun carnival on Oct. 31 in Northridge. Since the club’s formation after the Northridge Earthquake, Jishin Taiko has aimed to give back to CSUN and its surrounding communities by building a bridge between Japanese and American culture. Photo credit: Clare Calzada 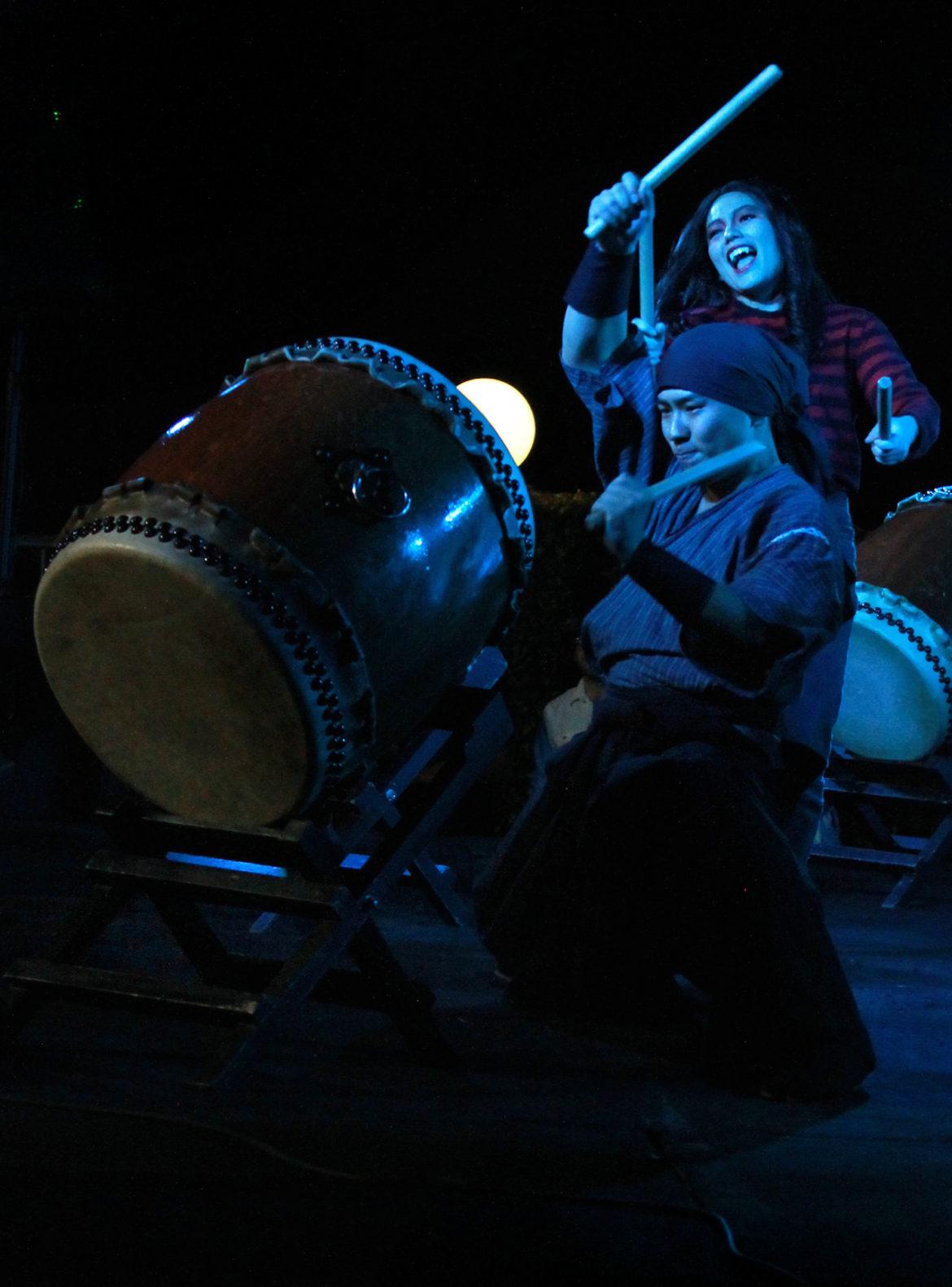 Yohei Nagao and Laura Perez while performing on Wednesday, Oct. 31, 2018. Nagao, who is 23 and a junior, believes it was fate for him to join Jishin Taiko. “I feel like this club is like me. Taiko is originally from Japan and now here in U.S. I’m from Japan and came here [to] study,” said Nagao. “Thanks to this club, I finally met friends who can work, fight, cry with me together. I finally feel that I belong here, I can be honest here and I can do what I like, which is Taiko.” Photo credit: Clare Calzada 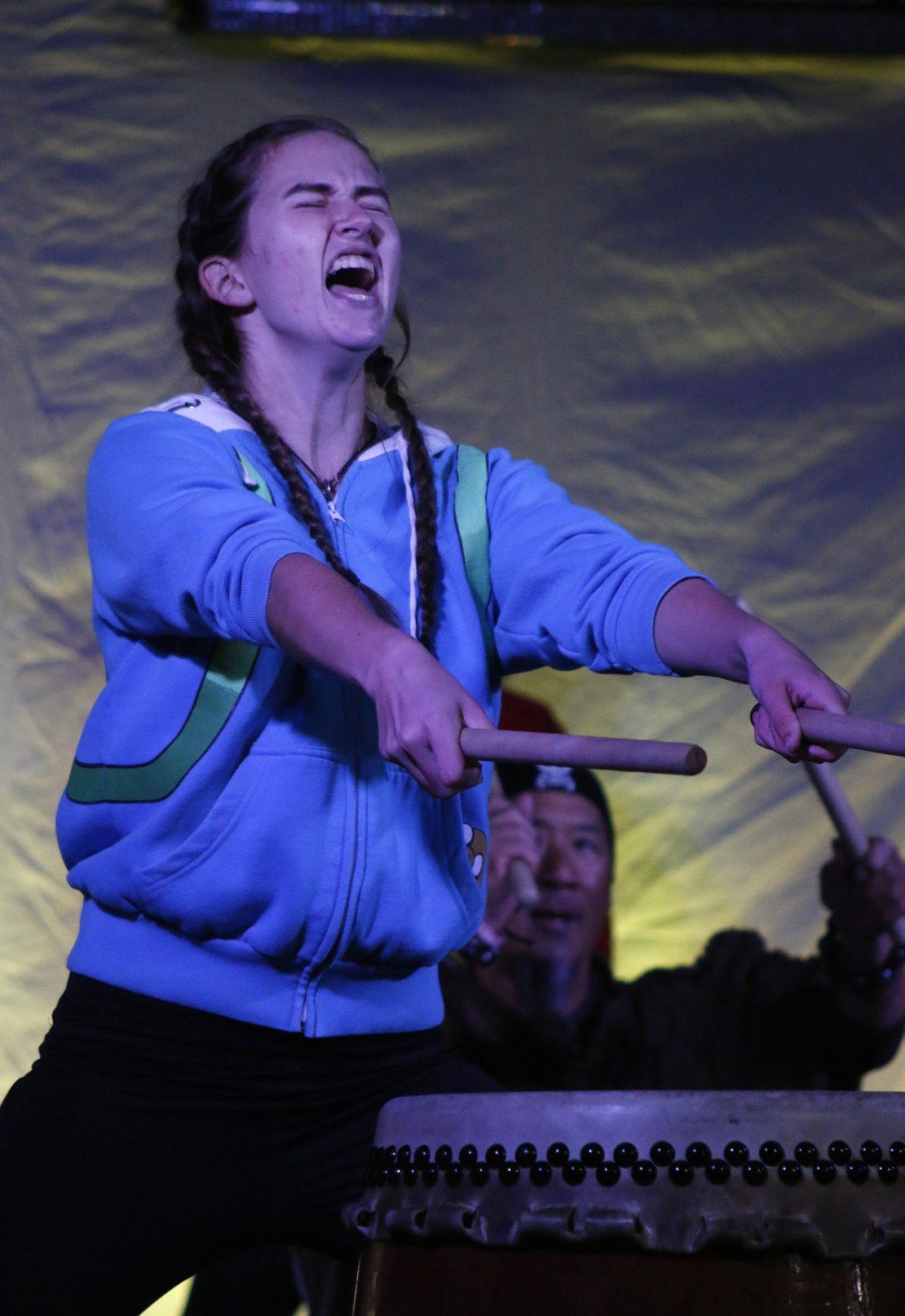 18-year-old freshman Emma Kupershmidt performs Kiai, a shout which gathers energy or ki, during her solo. She joined during Meet the Clubs back in September. “I’m learning pretty fast because I think it’s pretty similar to an activity I did before, which is Color Guard,” said Kupershmidt.Utilizing the right muscles is the toughest part about Taiko for the new member. “You actually have to use your back muscles when hitting the drum.” Photo credit: Clare Calzada 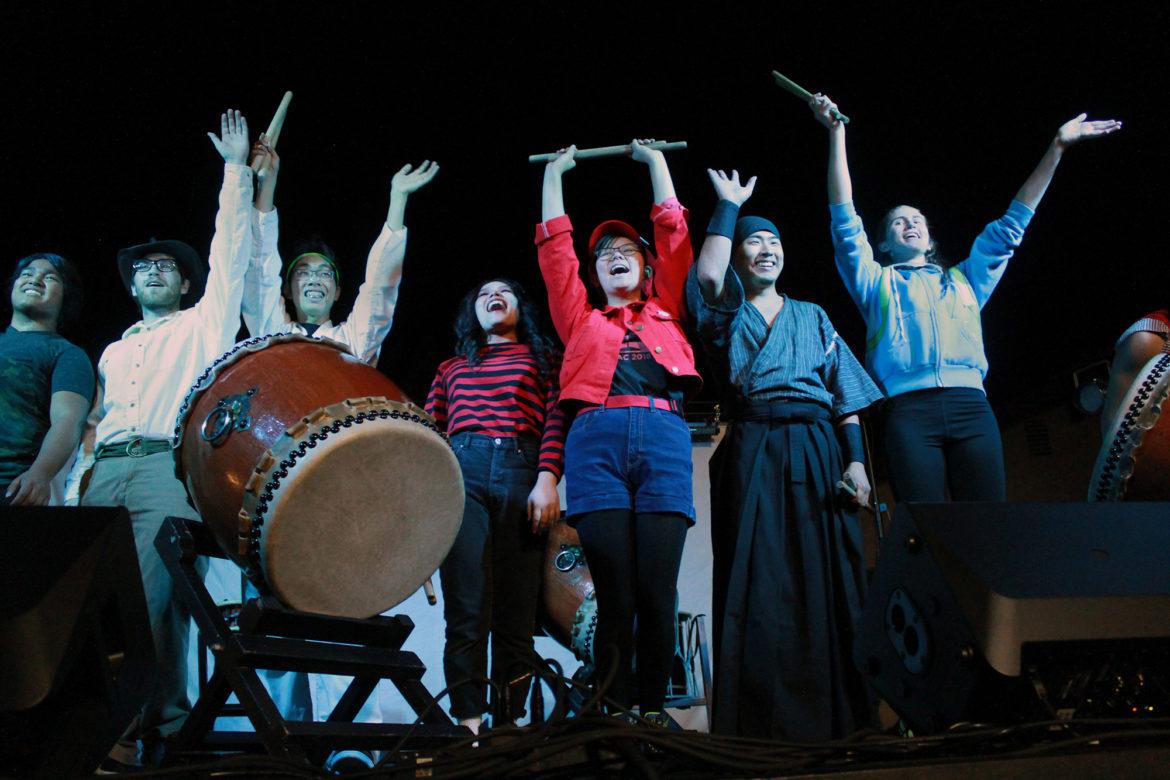 The Jishin Taiko Ensemble reacts to the audience’s applause after their final performance on Oct. 31, 2018.”Its the first time we’ve had new members perform this early in the school year,” said President Fumito Azama. “So when I saw them perform, and seeing their progress throughout all the practices, I was really surprised and really proud of them. They all had a smile on their face.” Photo credit: Clare Calzada