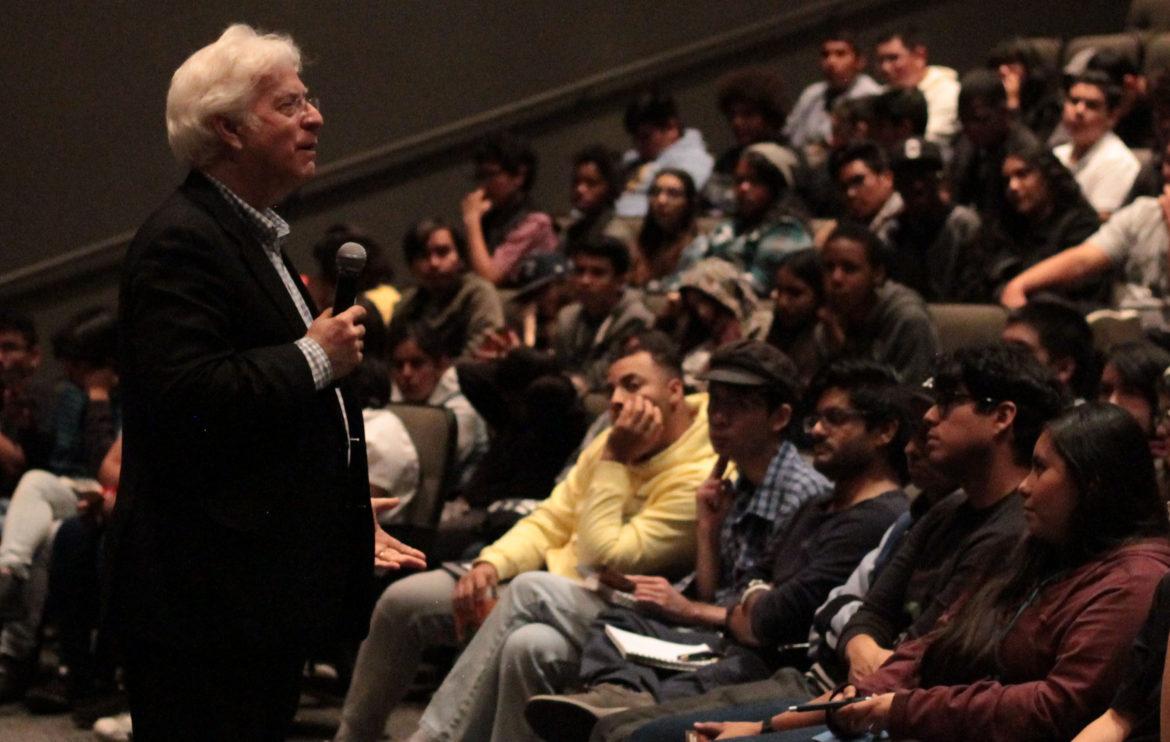 Ron Diamond speaking to the audience before a screening the 19th Annual Animation show of Shows at the Plaza Del Sol Performance Center in Northridge on Nov 20. Diamond is the founder of Acme Filmworks and the curator of the Animation Show of Shows. Photo credit: Elliott Keegan

Curator Ron Diamond and CSUN’s Department of Art hosted The 19th Annual Animation Show of Shows, where 16 short animated films were shown to the CSUN audience and a special appearance was made by Jason Hand, Disney animator, Tuesday, Nov. 20.

Diamond is in charge of Acme Filmworks, the company who is responsible for The Animation Show of Shows, an annual film celebration of independent directors who put together short films that are then showcased around the world.

The event, which took place in the Plaza Del Sol Performance Hall, gave students access to films that they otherwise wouldn’t have seen in major movie theaters.

“I want everyone, whether it’s a professional or student or anybody that watches these films, to get inspired,” Diamond said. “I want people to realize there is a lot of ways to tell creative stories, and we have 16 films from numerous countries, all these films are relatable, ambiguous and confusing like life is sometimes.”

The films have been shown throughout various countries and colleges, with pit stops in universities like Harvard, Dartmouth, UCLA and Long Beach State just to name a few. The hope in the program is to expand out to more colleges and even high school programs to “encourage critical thinking” in young adults.

“This is an idea to show short films like we would do a feature-length program,” said Diamond. “There is extremely high entertainment value in short films, as well as a chance to feel some serious emotions.”

The audience took in films with various themes and versions of storytelling that are not seen often.

“The works in this year’s show have a special resonance, presenting compelling ideas about our place in society and how we fit into the world,” according to their website.

“Artists get their rewards by having people view their work. My goal is to show these films to 160 plus countries,” Diamond said. “We have shown past Show of Shows in Poland, Palestine, Australia and South Africa. There are audiences dying to see these films. I want everybody to grow up watching these films.”

After showcasing the films, the audience was greeted by Hand, who had worked on the newly released film “Ralph Breaks the Internet.” Hand gave out signed posters, took questions from various animation students.

“I always appreciated when people brought films to my college,” said Hand. “It’s awesome for me to share stuff that I am working on now that I am in the industry.”

The story supervisor from Disney appreciated just being able to showcase what he and his colleagues have been working on.

“This event is almost an open invitation for people to work in our studio,” Hand said. “And it’s also very cool to see reactions out of people just because we have been working so long on the films ourselves.”

Students were happy that events like these were being showcased on their own campus.

“I thought the films were very good and interesting,” said Adam Moreno, a second year art-animation major. “I really like these types of events, they help showcase things I otherwise wouldn’t see.”