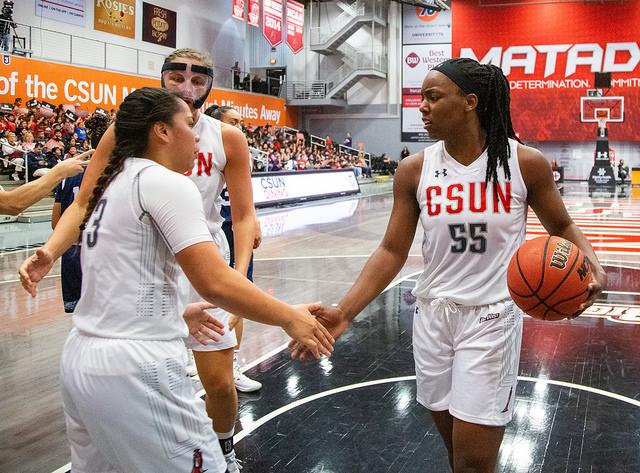 The team returns home to face Cal State San Marcos Wednesday, Dec. 5 at 7 p.m. Northridge is coming off their first road win of the season at Pepperdine. San Marcos is on a four-game slide currently where they have failed to score more than 80 points in each loss. The Northridge offense has heated up recently as they have scored more than 80 points in three of their last four outings. Darius Brown II has been a recent breakout player for the Matadors. Brown scored 25 points at Washington State on a perfect 12-12 shooting. The freshman also scored 20 points to go with nine assists in the win over Pepperdine. The Matadors will then travel to San Diego Sunday, Dec. 9 to face the Toreros. San Diego has won four of their last five games, with some impressive wins over Long Beach and Colorado. Matadors and Toreros tips off at 1 p.m.

The women’s team returns to the Matadome for a two-game homestand. First, Northridge will face off with Loyola-Marymount. CSUN has won two of its last three as well as two of three at home all season. The Lions have posted some tough wins over UCLA and UC Davis. CSUN forward De’Jionae Calloway has been a recent boost for the Matadors, scoring over 13 points in three of her last four performances. The two teams will face off on Friday, Dec. 7 at 7 p.m. Following that, CSUN will host San Diego State. The Aztec roster contains four double digit scoring averages to CSUN’s one in senior Channon Fluker. The Aztecs have lost three straight heading into the weekend and are looking for their second road win of the year. CSUN and San Diego State tips off Sunday, Dec. 9 at 4 p.m.