The ’90s coming back in style 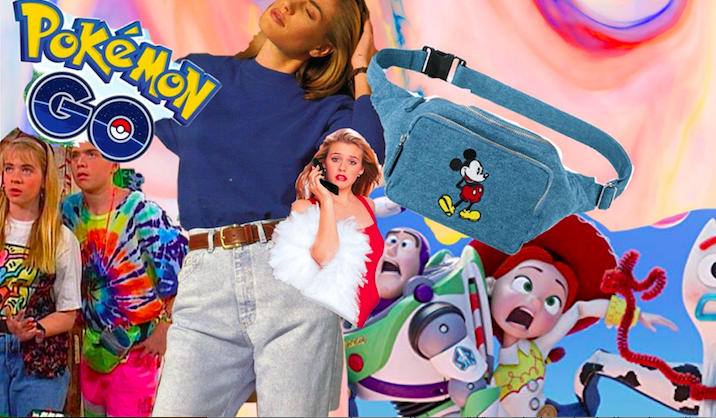 The saying goes that “what goes around, comes around” — anything from movies to fashion, and even scooters. Lately, 2018 is an age of nostalgia where inventors have evolved past traditions to be useful and trendy today. Here is a short list of all the things millennials can enjoy once more:

Bird and Lime have revolutionized the “modern” electric scooters as a means to provide alternatives for both traffic and the environment. Millennial scooters means paying for them through an app, starting off with $1 and a small fee every hour. What was once an instrument that was “out-of-fashion” now has become the new “it” way to travel, whether down the sidewalk or at beaches. Unless it’s been banned, of course.

“Our new way to exercise,” said second-year Jeannie Byrd. This interactive game has caused a frenzy since 2016 that had society witness walking gamers. The idea of utilizing a Pokémon game to have people walk outside was an upgrade from the usual Pokémon games that could be played solely at home in the past. But as life has gotten busier and apps can keep users glued to the phone, “Pokémon Go” refreshes millennials in more ways than one.

It’s the real deal once Supreme and Gucci jump on the bandwagon. Fanny packs have come back to be recognized as the epitome of convenience. Anywhere from Forever 21 to Steve Madden, Guess to Opening Ceremony have presented their own sleek fanny packs — usually in black, other solid colors of beige, blush pink, sky blue or plaid.

“Fashion obviously comes and goes, but Hypebeast brings it back and it’s suddenly cool,” said third-year Sera Chong. “It shouldn’t be so expensive, though. Gucci’s is over $1,000!”

Household names are predicted to be coming back in time for 2019, from “Toy Story 4” to “Star Wars IX,” to new premieres of “Dumbo” and “Detective Pikachu.” Whether it’s due to an idea shortage or a demand of nostalgia (if not both), movies of the past have found themselves being built upon with new ideas and lengthier stories.

New conflicts keep the movies going, offering a new perspective and a chance to show the ’90s charms to kids today. Although, this pattern receives mixed reviews from millennials that range from, “They need some new ideas, nobody even asked for the fourth movie!” according to fourth-year Taylor Hill, to, “It’s the money side of things speaking, but it’s nice to see what else they come up with,” said fourth-year Mitchell Stewart.

2018 also saw some nostalgic returns, such as “Incredibles 2” and “Christopher Robin.” Only time can tell what else the movie industry will either create or build upon for audiences of all ages to watch together.

From chokers, headbands, crop tops to denim on denim and “mommy” pants, the ’90s fashion scene has also reincarnated to find a home in our closets today. Chokers and headbands have returned with more modern or boho designs to rest on Forever 21, Urban Outfitters and Madewell shelves, while crop tops are often sported with oversize denim jackets or short hoodies for a spunky winter look. These are further complimented with high-waist pants, boot-cut jeans or the distinct “mommy” bell-bottom pants that so few can seem to pull off.

Meanwhile, both Converse and Nike continue to make a name for themselves through collaborations with other high-name brands, such as BT21 and Off-White. While it’s been custom for fashion to embrace the past, it still propels the tradition of sifting through the past to renew it for the future. Time remains a concept to be played with artistically, in order to make it both fresh and significant for consumers of all ages.

Whether nostalgia is marketable or it’s the trend to look back, 2018 has witnessed the merge of past and present, wrapped in a millennial glow that beckons us to recognize its new potential. Essentially, the past continues to help the present for a more creative future.