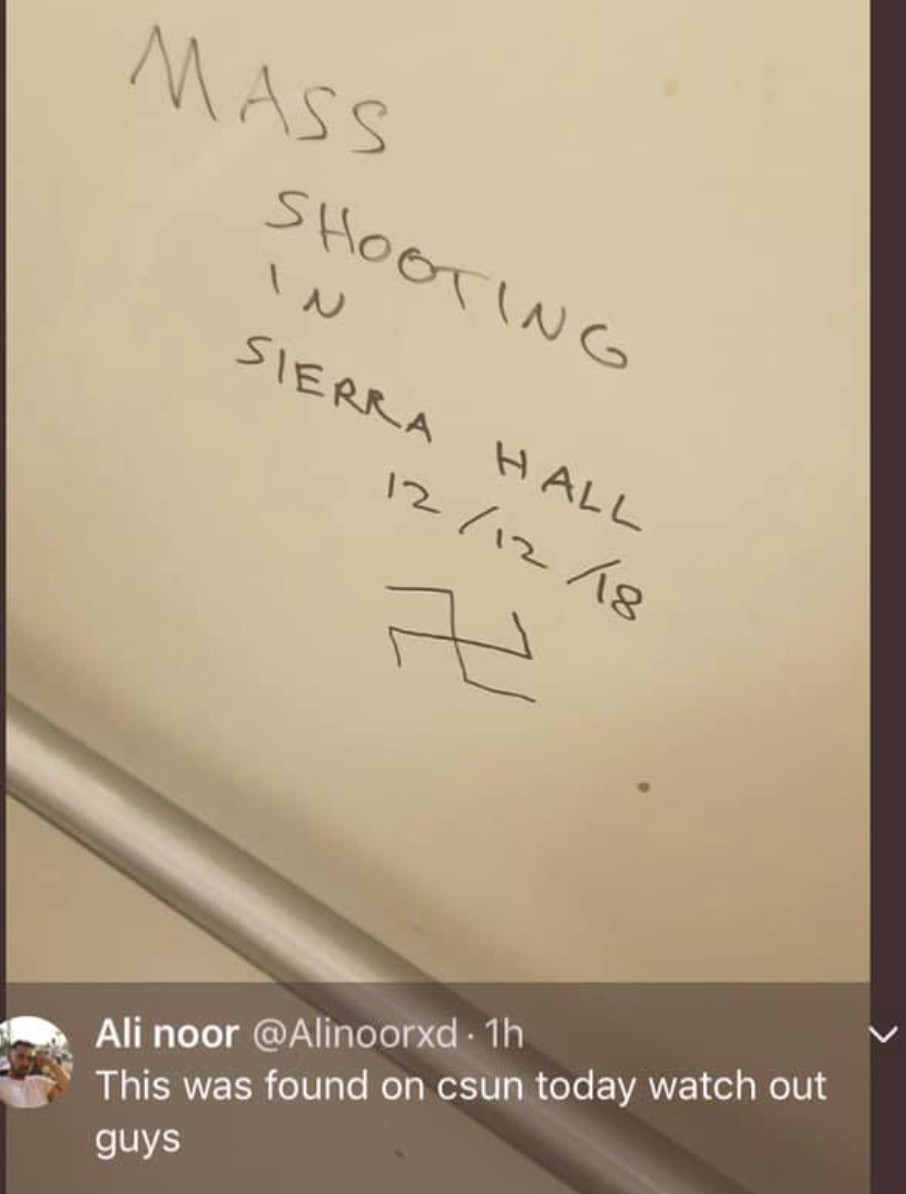 Police have begun investigating a threat made to CSUN.

CSUN police have begun investigating reports of a mass shooting threat being made against CSUN on Wednesday, Dec. 5.

CSUN Chief of Police Anne Glavin stated in a press release that they are aware of the message, “Mass shooting in Sierra Hall 12/12/18,” written on a wall in Sierra Hall, along with similar hate language written last week in the same building.

“I want our community to know that Police Services is investigating, and we have stepped up patrols on campus,” said Glavin in the press release.

Another image of an alleged threat written by an individual has been making its way around social media, where the individual says that bullying and professor’s lectures are the reasons for the alleged mass shooting. It was also mentioned that the shooting will allegedly involve Northridge Academy High School. 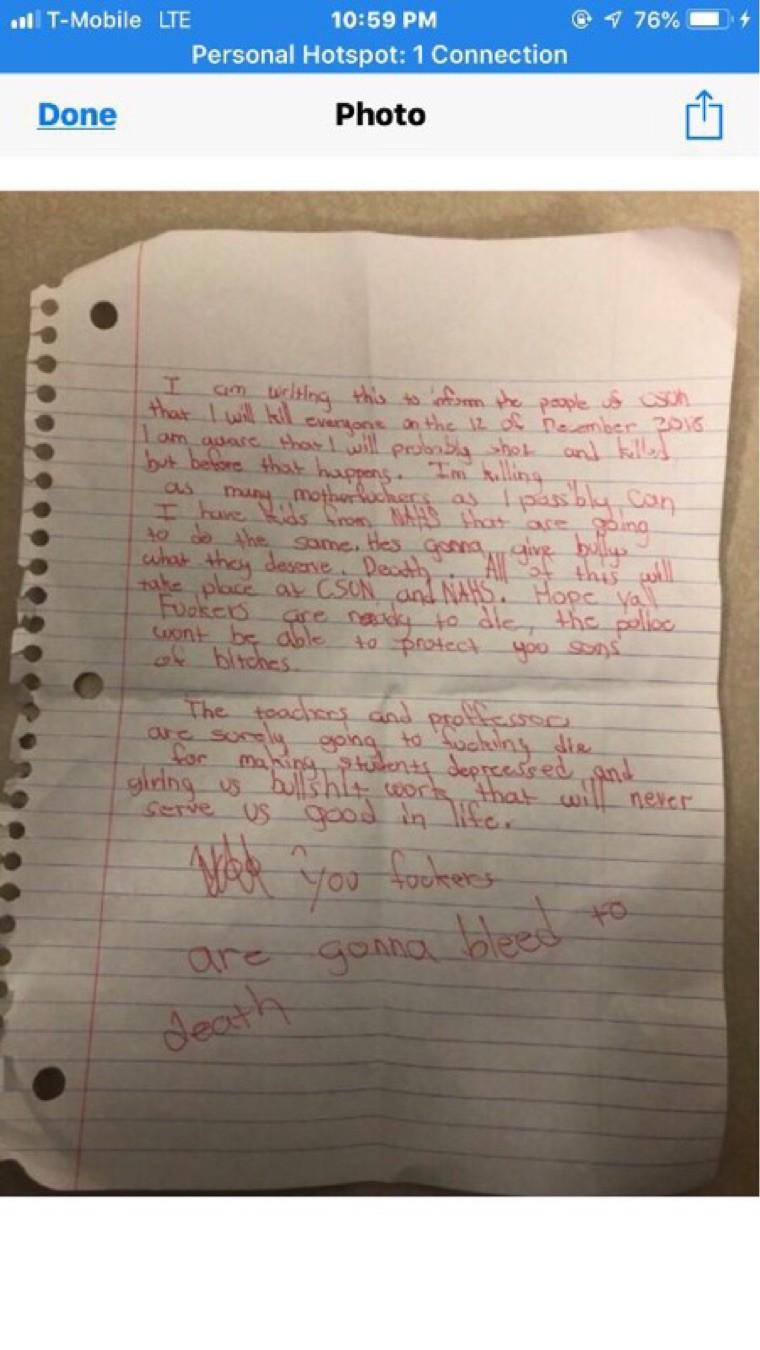 There was also an Instagram post warning students not to attend an event by Dreams to be Heard because it is fake.

CSUN’s Dreams to be Heard released a statement saying that they are aware of a Twitter account advertising a taco sale on Sierra Walk on Dec. 12. They explained that they are not active at the moment and are not hosting any events on campus.

“Please try to stay off campus on the 12th if it is possible for you, your life is more important than a grade!!!” stated Dreams to be Heard on their Instagram.

There is no information at the moment if this is connected with the mass shooting threats. 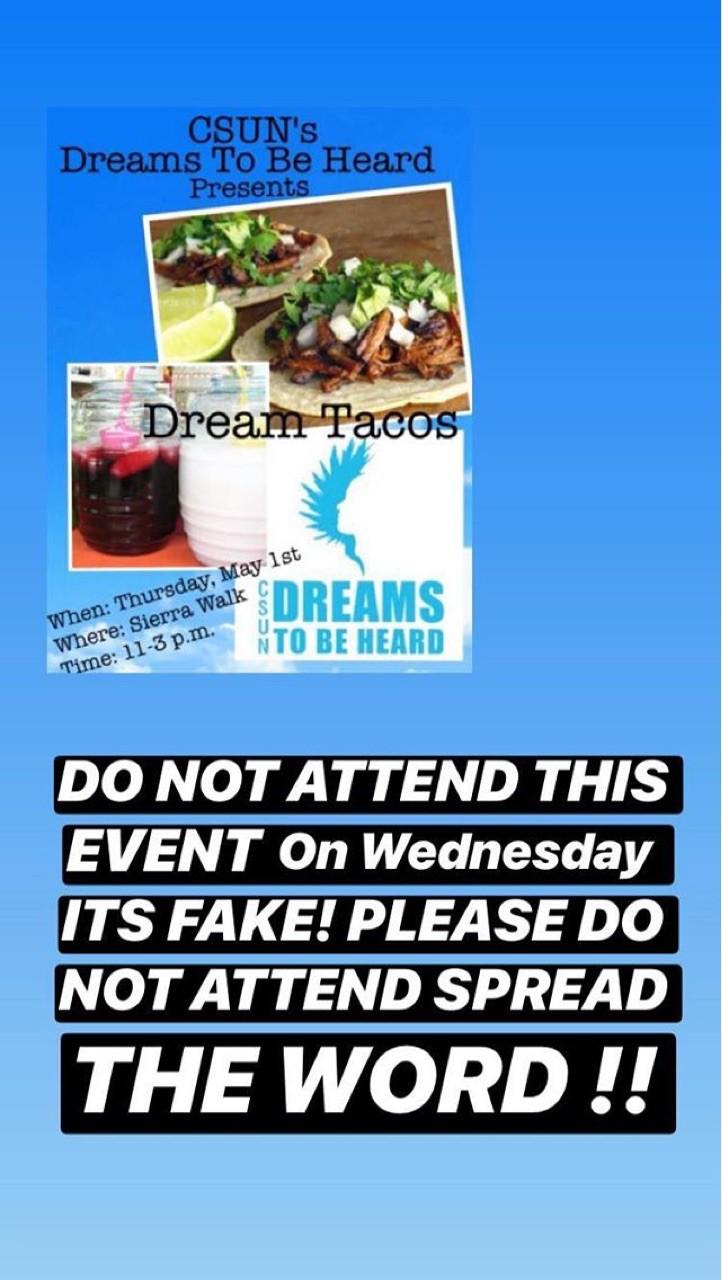 A petition has been created on Change.org asking CSUN President Dianne Harrison to have the campus closed on Dec. 12. The petition had more than 5,500 signatures as of 5:30 a.m. Tuesday, Dec. 11.

CSUN President Dianne Harrison, in a press release on Dec. 10, explained that the university has received emails from students and parents who believe that the campus should be closed.

“We have tried our best to respond respectfully and with sincere understanding to the emails received,” said Harrison. “We also are aware of faculty who, on a case-by-case basis, have made decisions about adjusting academic requirements this week. I want to thank our students and faculty for working together to make appropriate decisions.”

In Harrison’s press release on Tuesday, Dec. 11, it stated that the university is instructing all faculty holding finals on Wednesday, Dec. 12 to Tuesday Dec. 18, to provide an alternative option that would not require students to be on campus.

She also stated that the campus will remain open on Dec. 12 due to the threat assessment and information law enforcement currently gathered.

“Please be assured that we are taking every step to ensure the safety of our campus community, including increasing patrols across campus and collaborating with other law enforcement partners,” said Harrison.

The investigation by the CSUN police has conculded that there is no threat to the Pride Center.

CSUN’s Twitter account has stated, on Dec.12, that the university was aware that some individuals believe the Pride Center is going to be targeted.

Harrison encourages students or staff who are affected by the threat to speak with supervisors or professors about making adjustments.

“We will closely watch the situation and communicate with students and employees should we need to make changes relating to finals and the status of campus,” said Harrison.

The photo was shared on social media and has caused concerns among individuals of the CSUN community, many wishing students to be safe and careful.

The Sundial will continue to update the story as more information is gathered.

Update 12/12/18, 9:52 p.m.: CSUN’s Twitter account statement regarding people believing that the Pride Center is going to be targeted.

Update 12/11/18, 10:38 a.m.: The story was updated with Harrison’s comment regarding faculty to provide alternative options for students to take their finals. CSUN’s Dreams to be Heard’s statement is also included about the fake event on Dec. 12, however there is no information if it is connected to the mass shooting threats.

Update 12/11/2018, 5:34 a.m.: The second press release from Harrison was added. The alleged new threat was added as well as the Change.org petition to have the campus closed on Dec. 12.