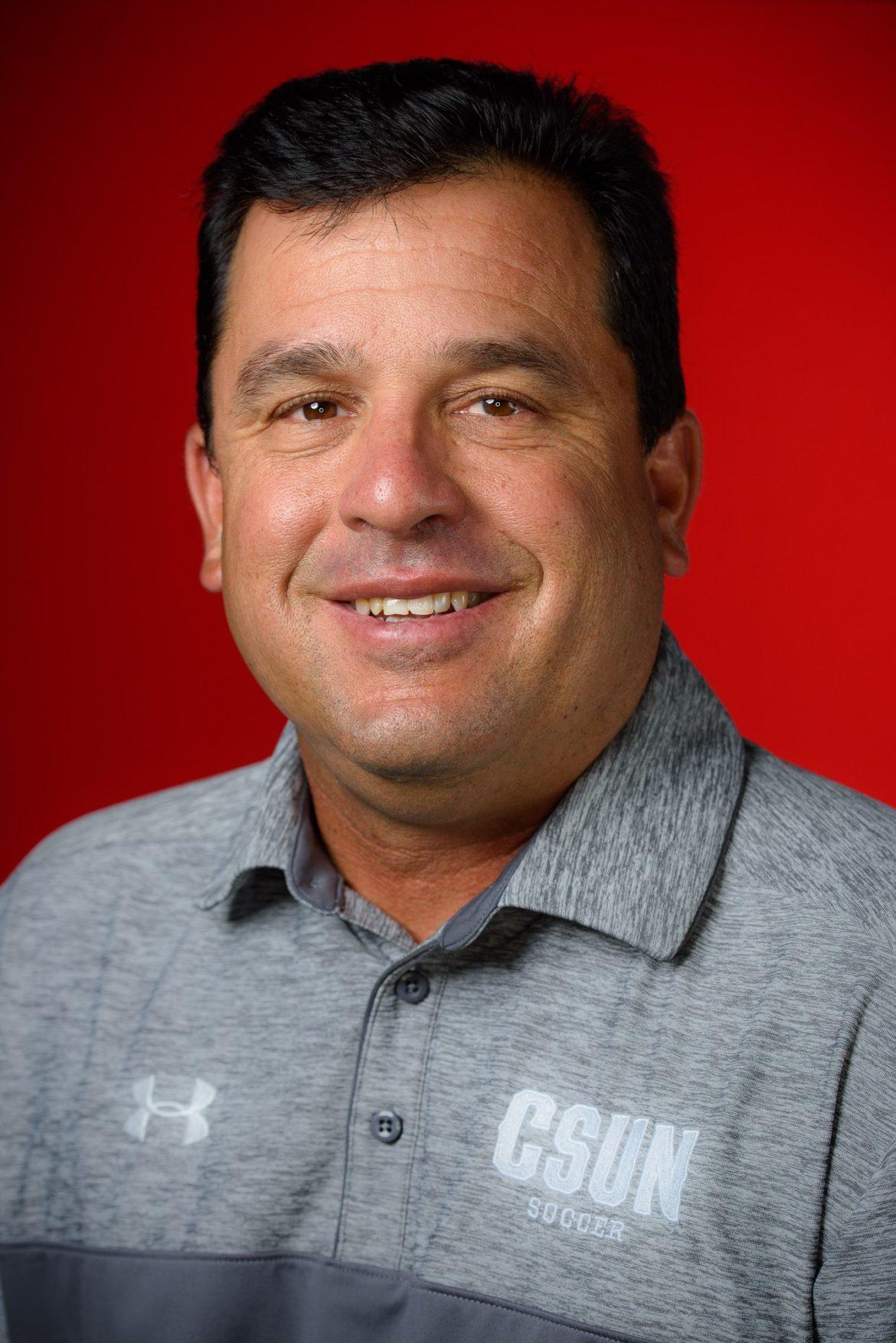 Men's soccer head coach Terry Davila, who now has a program-record 194 wins after 20 seasons at the helm. Photo credit: GoMatadors

Terry Davila remembers coming to CSUN in the 1970s and hitting in the batting cages at the baseball field with his brother, Teddy, while they waited for their father to finish up baseball practice. He remembers going over to the practice football field next door to throw a football around and watch the club soccer teams play at the fields across the street.

Today, those soccer fields are gone, replaced by Northridge Academy, while the practice football field has been reinvented as the practice field for the soccer team. That is where Davila can be found almost every day, pushing his team to practice and play the right way, a way that has led him to become the winningest coach in CSUN men’s soccer history.

Davila grew up around CSUN. His father, Tony, coached multiple Matador teams from 1981-1996 and because of how much time his father spent at CSUN, it became a second home at times for Davila and a dream to play for Northridge.

Davila’s parents had him play soccer as a child to increase his admittedly poor coordination and from there he was hooked.

“They wanted me to have success,” Davila said. “And then I enjoyed it because I ran, and I got a lot of my energy out and I loved the contact, I loved the physical part of the game. I loved the tactics. I loved falling in love with the ball. I loved scoring goals. So, I just loved every part about it. Just the emotion, how tight the games were. I just loved it.”

Davila continued playing soccer throughout his childhood, eventually fulfilling his dream to play for CSUN where he was a four-year player from 1988 to 1991, a transitional time as CSUN was making the jump to Division I.

His brother Teddy also played for CSUN, attending the school from 1989 to 1993, but had Davila not been there, Teddy’s story could have been a different one.

“I’ll always wonder if his destiny was different had he gone to UCLA, where his career would have went,” Davila said about his brother’s decision to follow him to CSUN. “You know I was good, but my brother was great. And I always wonder if our love wasn’t so strong that he might have went to UCLA.”

As a freshman, Davila immediately stood out to then head coach, Marwan Assad, who knew him affectionately as “Tony’s kid” from his years of hanging around the campus as a child.

“He was very tough and always trained hard,” Assad said. “He started as a freshman and never lost his spot.”

It was during his freshman year that Davila first tasted success as a Matador, helping his team to reach the NCAA Division II championship game where they would fall 2-3 to Florida Tech.

The next year, Teddy arrived and Assad soon found that the two brothers made each other even better after growing up and playing against one another, trying to see who could be the best in the family.

Unfortunately, Assad never really got to see the full extent of the formidable duo. Teddy broke his leg his freshman year and while it derailed his season, it pushed Davila to try harder than ever before, playing for both him and his brother.

“It really broke my heart when I saw him get hurt,” Davila told the Los Angeles Times in 1989. “I wanted to share our great season with him. Before a game, I can still feel his excitement, and it gets me going that much harder.”

Davila never wanted to be held out of a game, a lesson Assad learned the hard way. He tried resting Davila against San Diego State his sophomore year because of a few lingering injuries, but he would have nothing of it. Davila had a vendetta of sorts against San Diego State after they passed him over during his recruitment in high school and was able to convince Assad that he was ready to play.

It is that aggressiveness and willpower to keep on fighting that has led to Davila having such a long and storied coaching career. He has always felt that coaching is in his blood, with his father’s coaching resume already established while his mother was a softball coach at El Camino Real High School in Woodland Hills, where she won multiple city championships in the 1980s.

Davila first started coaching at CSUN after Assad heard that he was coaching the boy’s soccer team at Reseda High School. Once Assad learned of Davila’s desire to start a coaching career of his own, he offered him a job as an assistant on the coaching staff.

It only took a couple of years under Assad’s watchful eye before Davila was ready to take over as the head coach, and he has Assad to thank for making him the coach he is today.

“I love Marwan Assad,” Davila said. “He’s a coach who’s in the Hall of Fame, and I idolize his passion. I just love that, and his passion rubbed off on me too. It’s just the love for people and the love for being around the game. You get to have so many relationships with players and people. You’re so lucky, you know. You get to be involved with so many different cultures and it’s beautiful.”

Davila became the head coach of the CSUN men’s soccer team in 1999, becoming only the third coach in the program’s history. Since then, he has amassed an impressive 193 wins in almost 20 years, the most in program history, passing Assad’s mark of 192 this year in a 1-0 win over Cal Poly.

He has also led his teams to three Big West titles and six NCAA tournaments and has been named Big West coach of the year five times. Even more impressive is that Davila also spent two years as the women’s head soccer coach at CSUN in 2004 and 2005, posting a win percentage over .500 both years.

Davila’s passion for soccer has also led him to help the next generation of soccer players, working as the academy director at the Real So Cal soccer club for the past eight years. Before that, he coached multiple teams at different age levels in the academy since 2001, including winning a national championship with the girls U-16 team in 2002.

These double duties as a coach leave Davila with little time away from the job, though if you ask him he’d say he’s never worked a day in his life, and while he loves his job, he loves spending time with his family even more.

“The very little time that I have, I want to spend with my family, with my kids,” Davila said. “The best time is when you’re around your family because my kid doesn’t know if we beat UCLA or not. They don’t care about that. They just want to make sure their daddy’s happy, that I eat with them, I can talk to them about school work, and that’s probably the most gratifying thing in the world.”

Davila learned how to handle the duties of being both a father and coach from watching his father do the same thing when he was a coach at CSUN, Davila’s success being a testament to that. Later, he would gain a greater understanding of the coaching side of the job, first playing and then as an assistant under Assad.

Davila didn’t understand this at first, until Assad explained further and said, “You get to see the world. You get to see everything that’s happening,” a lesson Davila says he’ll never forget.

There are a lot of things that Davila remembers from his life. Some of these, like the lessons he learned from his father and Assad, have had more of an impact than others. But nothing, he says, compares to the impact that his players, coaches and everyone else he has met as a coach have left on him.

It is those moments, the countless memories that Davila has had at CSUN, that define him the most.

From hanging out with his dad as a child to helping his team to a national championship, to getting the most wins in program history, CSUN has helped mold Davila into what he is today, and he wouldn’t have it any other way.

“It’s like Jim Valvano saying ‘I’ve cried at this job,’” Davila said. “I’ve gotten mad here and I’ve been so happy. I’ve gotten to feel so many different emotions.”

Davila loves this job and he loves CSUN for letting him continue to have it year after year. One day soon, he hopes to be able to pay the school back for everything they’ve done to allow him to succeed here.

“I’m proud of the school,” Davila said. “The school’s backed me up tremendously. They’ve given us a locker room, they’ve given us food, they’re treating us like Division I athletes and hopefully we can pay them back in the next couple years and do something that’s never been done before here.”