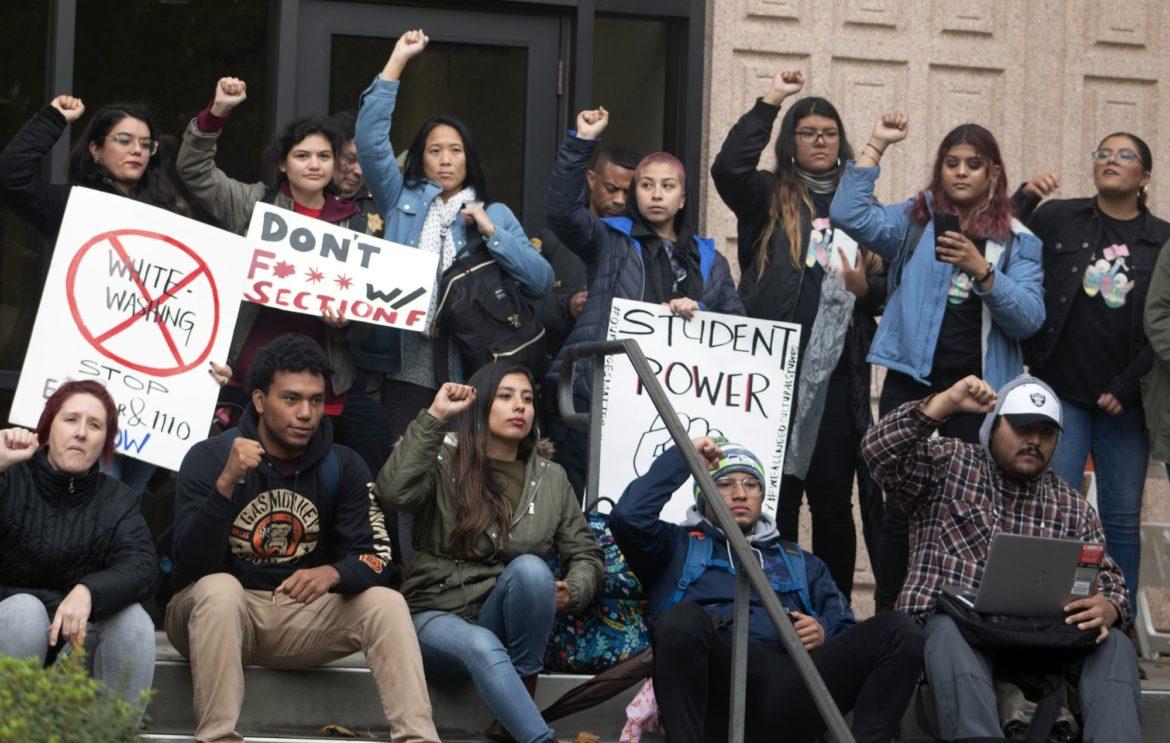 CSUN protesters sit on the steps in front of the University Library, where the senate meeting debating ethnic studies is being held. They raise their fists in unison to show empowerment. Photo credit: Monica Villacorta

The Faculty Senate voted 44 to 20 in not participating in the implementation of Executive Order 1100-Revised (EO 1100-R) on Thursday.

Faculty expressed concerns over the lack of data that supports the resulting changes of EO 1100-R.

“I cannot vote to support President Stein’s ruling on my colleague’s point of order,” said Holli Tonyan, professor in the department of psychology, speaking to the senate. “I believe we must have data of the number of students impacted by the G.E.D. recommendations and strict adherence to EO 1100-R.”

Professor of computer science, Jeffrey Wiegley, supported Tonyan’s statement and believes that they are post implementation and that the administration has given the faculty a chance to provide them with options. Wiegley does not want to lose the faculty’s self-governance because he wants to be involved. However, due to the lack of data, he is having a difficult time deciding what is the best option for his students.

“I’m personally kind of not ready to vote on this as much as I would like to be,” said Wiegley to the senate.

Former Faculty Senate President Adam Swenson asked the senate to choose a plan that constitutes implementation, rejecting the Chair’s ruling. Swenson gave the senate two reasons as to why they shouldn’t implement EO 1100-R. The first was that the curriculum would not be decided at the Faculty Senate, but instead only an allocation of resources. The second is symbolic to Swenson because he believes the Chancellor’s Office has been jeopardizing the value of CSU students’ degrees.

“I spent a lost year, this year. A ton of time with these issues and I confess I still don’t fully trust my understanding of the trade off or the hazards that the options potentially before us will intel,” said Swenson. “I am confident that our Provost will work to ensure that the Deans work with the Chairs and their curriculum committees to help her recommend an option to the president.”

The Faculty Senate also voted against the motion for the vote of no confidence of President Dianne Harrison, 32 to 26.

Kathryn Sorrells, professor in the department of communication studies, spoke on behalf of the Ad-Hoc committee, which includes Senator William Garrow, Senator Gina Masequesmay and herself, on the resolution of no confidence in Harrison.

“What we’ve heard repeatedly across campus … is there is extreme dissatisfaction of the President’s leadership,” said Sorrells about the vote of no confidence of Harrison. “The cumulative effect of multiple years of failure of leadership, and undemocratic and authoritarian management, evidenced by non-inclusive, non-transparent, non-collaborative practices produce a culture of fear.”

The protest began when students were turned away by police officers at the blocked entrance to the meeting due to limited space in the Jack & Florence Ferman Presentation Room. A select 31 students were allowed into the meeting but only five of them were members of the student protest group Executive Order Coalition, according to the protesters.

Students that wanted to be present at Thursday’s meeting were to fill out a form on the Faculty Senate website with their CSUN emails which were then randomized and the first 31 students on the list were chosen to attend the meeting. Protesters were displeased with this process and explained that it was unfair since this was a public meeting.

“The Faculty Senate should allow students in,” said Tracy Sodick, a political science major and member of the Executive Order Coalition. “I was a part of the Ad-Hoc Committee that wrote a document that was supposed to be presented inside and I’m not even allowed in.”

“Harrison’s got to go! We got to vote her out!” said a student while the crowd chanted “Vote her out!”

Faculty members were also in attendance and taking part of the protest. Assistant professor of Chicana/o Studies, Stevie Ruiz, joined the protests, saying that he was being blocked out by his own faculty.

“Join with the students, your faculty is being discriminated against by race,” said Ruiz. “This is a hostile work environment for your faculty of color.”

An Africana Studies student took the megaphone, expressing to the crowd the importance of ethnic studies to the students that are graduating that will return to their communities with the skills that they have learned at CSUN.