No Diane, no problem for men’s basketball 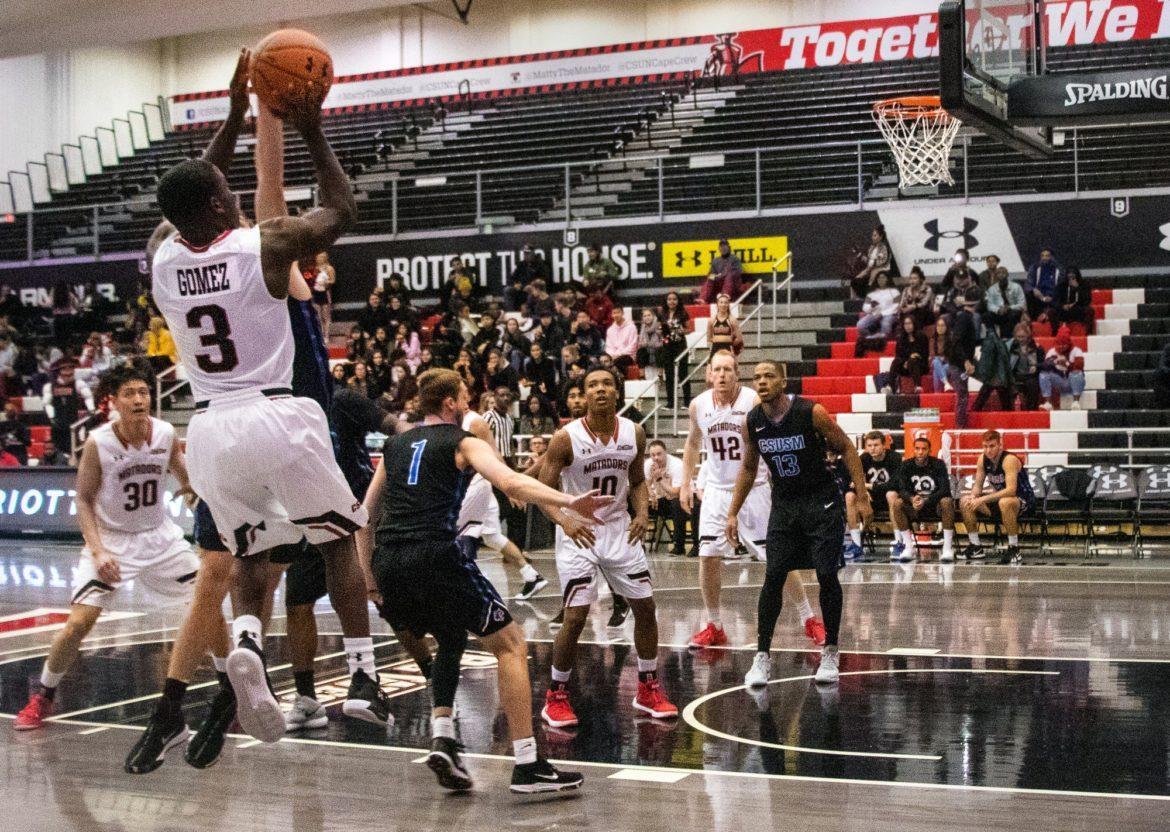 The men’s basketball team beat San Marcos 76-72 on Wednesday and have now won back-to-back games for the first time this season.

Sophomore Terrell Gomez led the Matadors with a career-high 26 points, but it took a complete team effort to overcome the absence of standout redshirt freshman Lamine Diane, who missed the game with an injury sustained in the win over Pepperdine.

Fifth-year senior Blair Orr was especially productive, scoring a career-high 15 points and grabbing six rebounds while providing tremendous effort on both ends of the court.

“We ran our offense which is something in our first three games that we kind of struggled to do. Once we ran our offense, things just started to open up,” Orr said about what enabled him to have such a high impact on the game.

With Diane out, as well as junior Rodney Henderson Jr., freshmen Elijah Harkless and Teddy Ochieng, many Matadors had to play more minutes than they were used to and impressed under the circumstances.

“Because we had so many guys out it was an opportunity for some other guys to play some more minutes, good minutes,” coach Mark Gottfried said. “I think that was good. A lot of guys got to play tonight and again we’re always happy to win.”

The Matadors started the game hot, hitting three of their first four 3-pointers before the Cougars went on a run to take a three-point lead midway through the first half. Junior Khalil Fuller was a menace in the paint for the Cougars, scoring a game-high 30 points to go along with 11 rebounds.

“I think it was more tough for me in spurts, getting fatigued and not staying with the principles that our coaches have implemented on defense,” Orr said. “You know, staying down and jumping for this and that. There was one or two times where he got under me and that’s something that the coaches preach not to let happen.”

The Matadors finished the first half strong, getting a key defensive stop as the clock ran out to take a 39-33 lead in to the break.

The second half featured plenty of back-and-forth action, though CSUN refused to back down and was able to hold on to win the game by four points.

It took every player’s contributions to pull out the win, with everyone scoring at least once, and the players pointed that out to each other after the game.

“That’s the first thing that anybody said in the locker room,” said Orr. “Terrell said, ‘hey. Yeah that was a tight one, yeah it came down to the wire but,’ just like you said, ‘it was a good opportunity for a lot of guys.’ And just going forward, now they get their feet wet, you know we just got to build from here.”