The best disco in town: A playlist curated by CSUN’s discogod 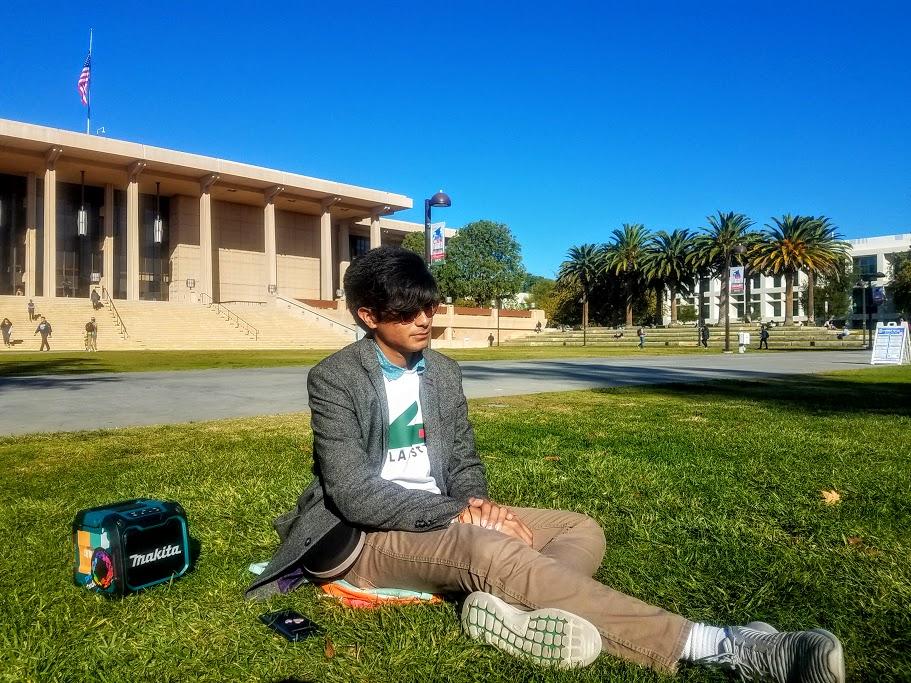 Chris Salazar, Communications major, usually sits in front of the Oviatt Library during the daytime. Although he is majoring in communications to have something substantial, his true passion is music. Photo credit: Ivan Salinas

Students on campus may find themselves walking to class to the sound of disco music coming from a blue compact Makita Bluetooth speaker thanks to Chris Salazar, a communications major and a lover of disco.

“I like seeing people bop their head as they’re walking,” Salazar said in regards to the simple reason behind sharing his taste in music.

He sat in the quad, in front of the Oviatt Library where he’s usually stationed, enjoying the tunes and the positive reactions the music brings to students.

“Most people don’t know the songs but they seem to like it,” Salazar said.

As an avid disco listener, he decided to compile his favorite songs in a public Spotify playlist, “The Best Disco in Town,” that can be found under the username discogod_.

His acquired taste for disco went along with the dark sunglasses, fringed hairstyle and the white Lacoste sweater layered by a warm blazer he was wearing; he stands out as the result of a smooth aesthetic he has created for himself.

To add to his mysteriousness, Salazar mentioned his dislike of mainstream disco songs and the new ‘comeback’ of the genre.

“It is too electronic,” he said, compared to the basic instrumentation of the late ’70s and early ’80s with a few wind instruments and the guitar-bass-drum format.

Next time you find yourself on campus, you may want to speak to Salazar about disco and learn something new or Shazam one of the songs he is playing. This genre of music is known for only being “dance” music, but such a simplistic labeling of the genre can discredit those artists that have made something more meaningful and complex that is worth paying attention to.

Here are five songs recommended by discogod_ himself from his curated Spotify playlist. Whether it is 12” single versions or extended mixes, there are plenty of songs to enjoy.

1. The Fruit Song by Jeannie Reynolds

“The song has a double entendre, it talks about bananas and other things but you get the real meaning,” Salazar mentioned. “It was common for disco songs to be provocative at that time.”

2. I Want Your Love (Dimitri from Paris remix) by CHIC

This is one of the long songs Salazar was referring to. “Nile Rodgers is the guitar player of the band,” he added. “He also started a group called Sister Sledge.” The group only managed to make one song produced by Rodgers, but recently he was featured in Daft Punk’s album “Random Access Memories” where his guitar playing is once more immortalized.

“I would say all of Costandinos’s work is great because of the orchestration he has in his songs,” Salazar said. “His best work is the ‘Romeo and Juliet’ album, which is basically the entire story told through a disco in a non-stop format.”

“It is said to be the first disco song,” Salazar explained. “Michael Jackson actually stole the chorus from this in ‘Wanna Be Startin’ Somethin.'”

“This last song has amazing brass work,” Salazar said. “It contrasts against the later works they did where they simplified their sound. In general, it’s hard to pick because there just so much good disco songs that nobody has ever heard of before. Some of them are pretty good, amazing even, and some of them are so bad and cheesy that they are good too.”