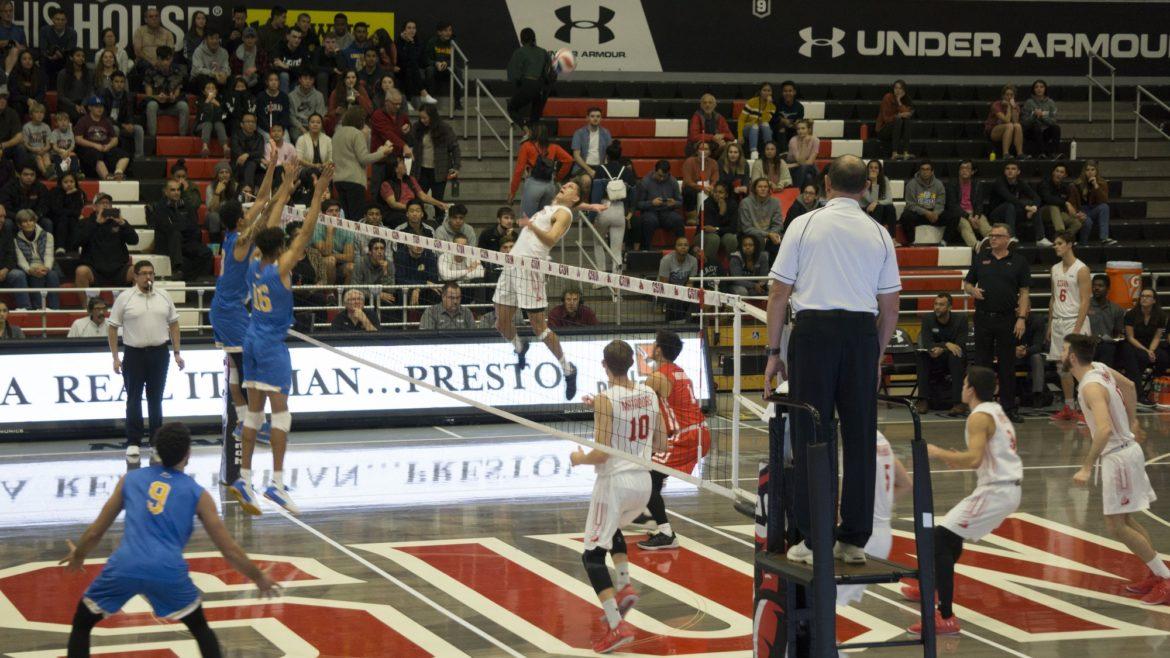 Two UCLA players attempt to block a CSUN spike in the Matadors' sweep over the Bruins on Wednesday night at the Matadome. The 12th-ranked Matadors beat the 2nd-ranked Bruins in CSUN's home opener and are now 3-1. Photo credit: Jairo Alvarado

The men’s volleyball team swept UCLA at the Matadome Wednesday night as they upset the No. 2 team in the nation in their home opener.

In a game that was battled closely throughout the whole night with 22 tie scores and 11 lead changes, the Matadors came out on top and knocked off the Bruins in an impressive non-conference matchup, handing the Bruins their first loss of the season.

CSUN took control of the first set, setting an early momentum for the second set and after falling behind in the third, they came back to win the set and close out the game (25-22, 25-16, 25-23).

“That UCLA team is a great team, they have really good players, outstanding coaches, they’re really good, so for us to beat them tonight, this is a really gutsy win for our team,” said coach Jeff Campbell.

Senior Dimitar Kalchev helped build the momentum in the second set, serving back-to-back aces to take an early (2-0) lead over the Bruins.

But most impressive was CSUN’s defense as they limited UCLA to a .200 hitting clip.

“It’s an awesome feeling. We worked hard for this. We had a game plan coming in, and I think we executed it really well,” said senior setter Sam Porter. “We put a lot of pressure on them serving. And it’s a first of many. I think it’s a great win to start off the season.”

CSUN had taken control of the game, but on the third set they had fallen behind as the Bruins outscored the Matadors 14-7. The Matadors received a quick boost from the crowd, which helped them on a 5-1 run that closed the lead towards the end of the set. A few errors by the Bruins gave the Matadors a chance to come back and win the set.

As for Campbell, he now opens up at home with a win, marking his 308th win at CSUN as the head coach of the men’s volleyball program, his 22nd year at the helm.

CSUN has now improved their record in home openers to 27-16 with the win against UCLA.

They will return on Friday, Jan. 25 to host Loyola-Chicago at the Matadome at 7 p.m.