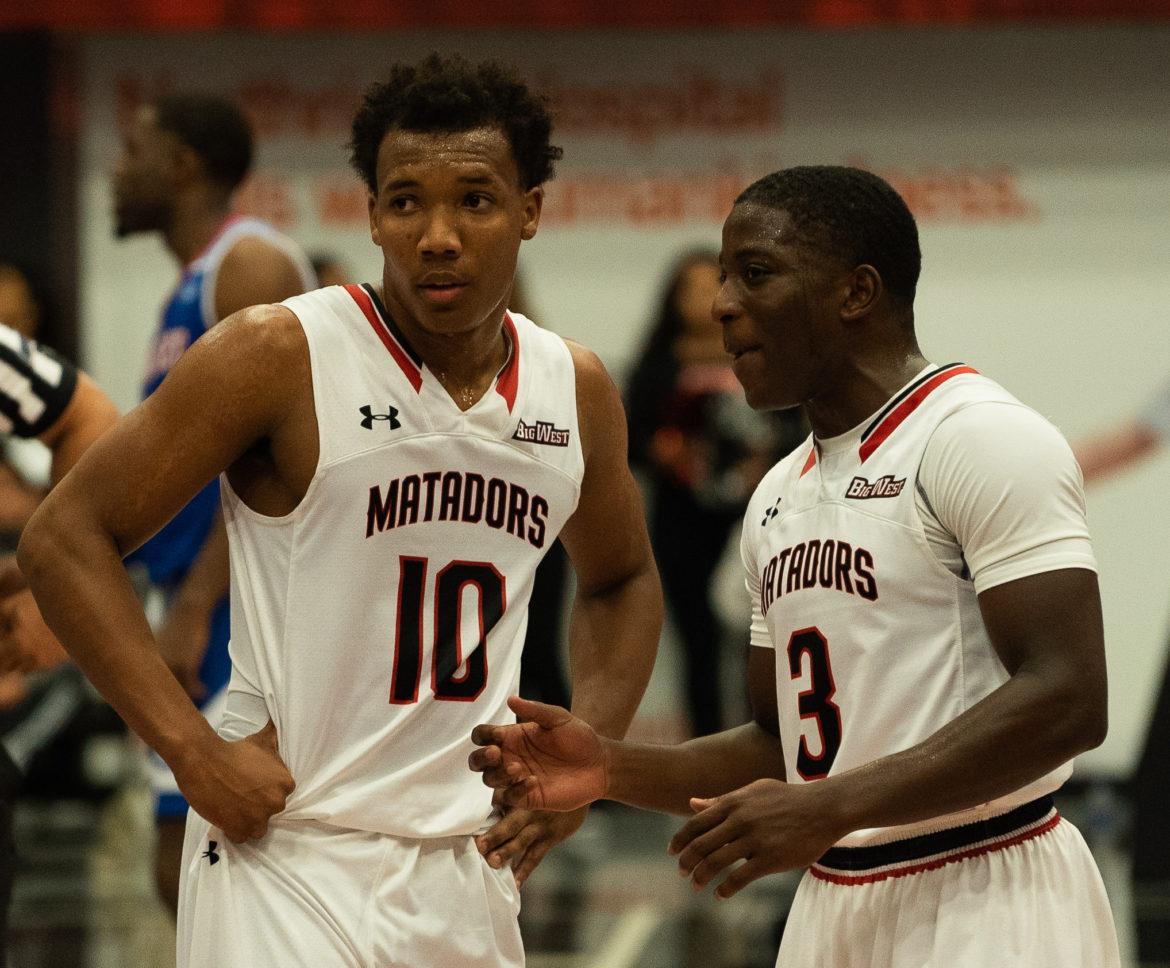 Sophomore Terrell Gomez set career highs with 32 points and six 3-pointers to start the men’s basketball’s conference play with a victory over UC Riverside, coming from behind to erase a halftime deficit and win 84-83 on Wednesday night in Riverside.

After setting a script throughout the first half of the season in which they would take a halftime lead and then lose it in the second half, the Matadors flipped it, outscoring the Highlanders by eight points in the second half to escape with a one-point victory.

“I thought we just picked our defense up. That was the point of emphasis,” coach Mark Gottfried said. “We had to go get them, you know, three-quarter court, half court, pick them up, try to pressure them a little bit more. Certainly, we didn’t pressure them enough in the first half. I think they had eight threes in the first half. We had to take away the threes, we had to get into them a little bit more and see if we can speed them up and maybe disrupt their offense a little bit and I thought our guys did a much better job of that.”

The first half went the way of the Highlanders as they shot 8-15 from three-point range and generated 13 points off eight CSUN turnovers, and while the Matadors did not shoot poorly, hitting 6-10 threes and 48 percent of their shots overall, they seemed to be struggling with the length and quickness of the Riverside players.

The second half, though, was an entirely different story.

The Matadors shot 56.7 percent in the second half and made 3-6 3-pointers while also keeping better control of the ball, turning it over only once.

Their defense also stepped up, forcing Riverside into six turnovers and limiting them to only six made 3-pointers in the second half.

“It was good that coach just kept preaching turnovers to us after the first half. I had two in the first half that was just pointless,” Gomez said. “I could have just pulled up and shot a jumper. He was upset at me for that, but I just took his criticism and just kept going and we did better in the second half without turning the ball over.”

As has been the case all season long, the game came down to the Matadors’ inability to make free throws, and it nearly cost them.

Standout freshman Lamine Diane has struggled immensely from the charity stripe, coming into the game shooting a paltry 56.7 percent from the line and continued to struggle in this one, making only 7-16 free throws and had he made just half of those misses, the game would have been out of reach.

The same cannot be said for Gomez, who is usually automatic from the line, which makes his two misses with five seconds left all the more surprising and gave the Highlanders a chance to win the game with a last-second shot, though they came up short and CSUN escaped with a one-point win.

“I was shocked he missed two foul shots, and we were up three at one time,” Gottfried said. “We wanted to foul them, put them on the line. Our guys did a good job with that but we just have to make some foul shots late in the game and that’ll help us. Lamine missed two, Terrell missed two and that changes the game a little bit.”

Diane was not at his best, scoring only 21 points on 7-15 shooting, though he did help out in other ways, grabbing eight rebounds and dishing out seven assists.

After starting off Big West action with a win, the Matadors now have a record of 7-10 (1-0 Big West).

At this point in the season, Gottfried has yet to find a consistent third scorer to slot in behind Gomez and Diane, though Henderson has put in a case with his recent performances to be that guy.

Over his last six games, the junior transfer from Santiago Canyon has averaged 15.5 points per game in a little over 27.5 minutes per game, also adding the intensity on the defensive end that Gottfried craves from his players.

With the trio of Gomez, Diane and Henderson leading the way, the Matadors are in a good position to make a run at winning the Big West this year, a feat they have not accomplished since the 2008-09 season, though Gottfried has tempered these expectations.

“We could go play against Fontana High School, and we’d probably be excited to win right now so we just need to swing away and see if we can get a few here and there,” said Gottfried. “Our team’s been pretty competitive most of the time. We’ve lost a couple we think we should win so we just got to keep getting better, and we’ll take them one at a time.”

The Matadors will next play at Cal Poly on Saturday, Jan. 12 at 7 p.m. before heading home to kick off a three-game homestand against Hawaii, Irvine and Long Beach State.

Matadors and Rainbow Warriors tips off at 7 p.m. on Jan. 12 at the Matadome and can be seen on ESPN3.