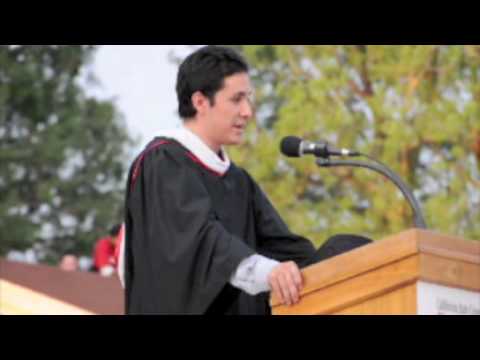 “This was a very welcoming event,” said Carlos Barrera, an 18-year-old business major. “It really motivated me to keep on studying and keep looking for a career path.”

Terry Piper, vice president of Student Affairs at CSUN, was the narrator for the event introducing the platform party and calling university President Jolene Koester to the podium. Koester welcomed and congratulated the incoming freshman with a brief speech.

Several administration officials made remarks regarding the student protesters and their cause as they assembled against the pink tape surrounding the area of the event.

“Give that cause a round of applause,” Koester said. The protesters stood with signs reading, “stop raising my tuition” and “don’t terminate my education.”

Despite the protest, Piper kept the ceremony moving by calling guest speaker Mendez to the podium.  The CSUN graduate told a compelling story about his college experience, admitting he never really cared about his education.  However, that all changed when his father died.  Mendez was a sophomore at the time.

“In an instant my world had been turned upside down,” Mendez said. “I was shocked.  I was scared and I was heartbroken.”

As Mendez soon realized, college would provide choices, choices that would be vital to his future. After obtaining a degree in construction management technology, the same field his father worked in, he recognized that this profession was not meant for him.

“I realized I had a passion for making a difference that needed to be put to better use,” Mendez said.

Now, he is thankful for his experiences and time spent at CSUN, acknowledging the university as having “world-class people.”  Today he is taking action by pursuing new things and hoping to find what he can do to make a difference in the world.

Succeeding Mendez’s speech, was author of “The Soloist,” Steve Lopez.

Lopez delivered a gripping account of what he learned from Nathaniel Ayers, a homeless man with schizophrenia who found his passion in music.

“I think there is a longing in all of us to make a connection. To find your muse, to reach beyond your own existence and maybe help somebody,” Lopez said.

Ayers and the Los Angeles Times columnist crossed paths one day when Lopez stumbled upon a man playing a two-string violin in Los Angeles.  Curious, Lopez asked the man why he played at this particular location known as Pershing Square. Ayers said he played there, next to the Beethoven statue, for inspiration.

“He had one thing that few of us never find when we walk this planet,” Lopez said.  “He had purpose. He had passion and it kept him alive. It kept him anchored, it kept him focused and motivated.”

From their first encounter, Lopez had a hunch Ayers would be a good subject to write about in his column.  The two eventually became close friends.  Lopez soon discovered that Ayers was a former student at Juilliard, but during his third year of school, he became schizophrenic, dropped out and began living on the streets.

Getting to know Ayers and his life story eventually led Lopez to discover his life’s calling.  He works to shine a light on the injustice and economic imbalance within the streets of Los Angeles

This year’s convocation stressed the importance of working to find a passion in life and using college as a means of achieving this goal.