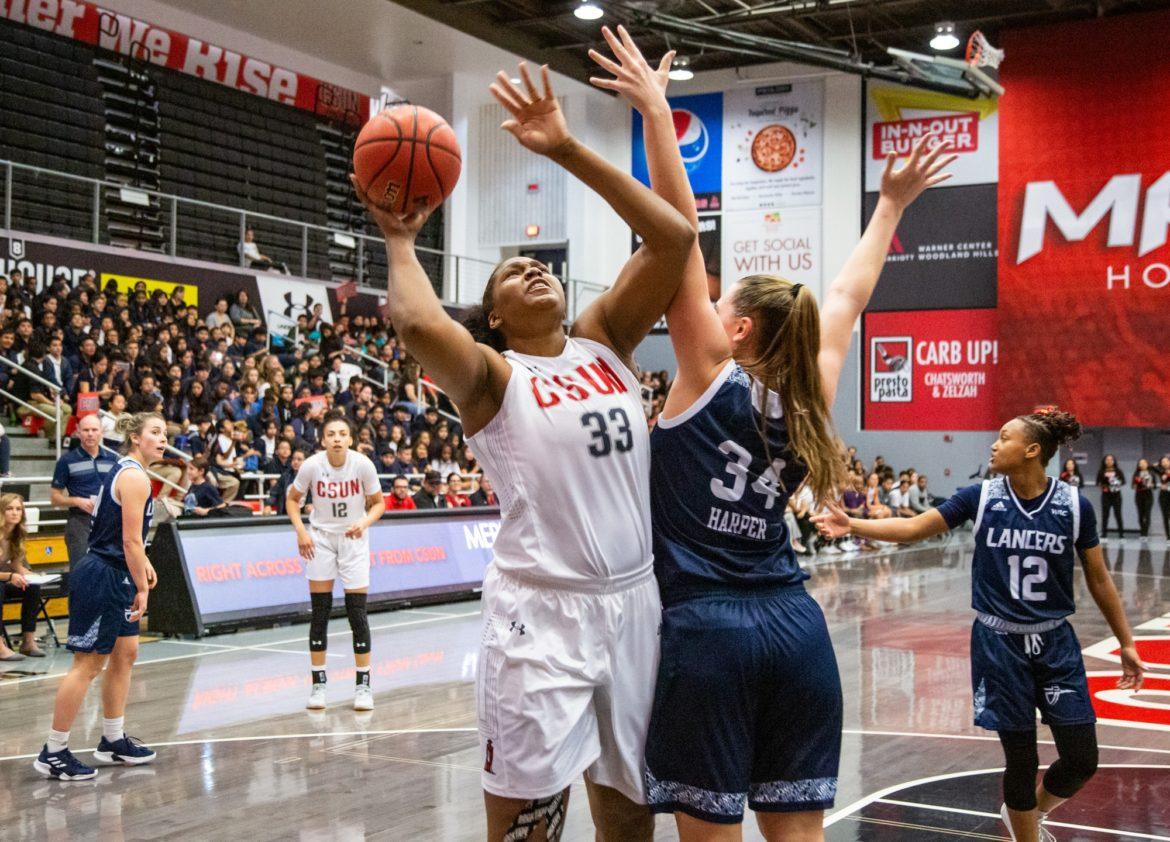 Senior Channon Fluker goes up for a basket against Cal Baptist on Nov. 28, 2018. Fluker leads the Big West in rebounds and blocks and ranks third in scoring. Photo credit: Roberto Cisneros

Redshirt freshman Lamine Diane and senior Channon Fluker are leading both of their respective teams in multiple statistical categories and are front-runners for the annual Player of the Year awards given to the best male and female basketball players in the Big West Conference.

The two are looking to become the first CSUN student-athletes to win the award in the same season, a feat that has been accomplished only six times in Big West history.

Diane, who came to the United States from Senegal in 2016 at the age of 19, is having one of the best seasons of anyone in the country and could win this year’s award without a shadow of a doubt, if head coach Mark Gottfried had his say.

“If the season ended today, I think it would be hard for anybody else to win that award,” he said.

While Gottfried did add the caveat that “a lot can happen” in the remaining 14 games of the season, a quick look at Diane’s numbers show just how special he has been.

Those numbers show that he is far and away the best player in the Big West, as Gottfried alluded to, though his numbers look even better when compared to the rest of the country. Nationally, he ranks eighth in points, seventh in rebounds, tied for third in field goals and tied for 19th in blocks.

Impressively, Diane is doing all of this despite not playing all of last year as he recovered from hand surgery, an experience he described as “really hard,” though he isn’t surprised at the high level he has been playing at.

“I was playing like that before (the surgery) so it didn’t surprise me,” Diane said. “(Not playing for a year) motivated me a lot because nobody didn’t know me out here when I came here because I practiced, like, one week so I had to prove myself (to them) that I could play.”

While his stats speak volumes as to what he can do, you really have to watch him to see just how dominant Diane is on the court.

At 6 feet, 7 inches, he is long and lanky, but also surprisingly strong. He is as comfortable running the court, which he does as fast as anyone, as he is with the ball in the paint.

It is in the paint where his athleticism truly shows, using his length and strength to create distance in the post as he turns around from his opponent, pulls up to shoot and stays in the air for what seems like forever before the ball finds its way into the basket.

And that is just one way that he is able to score. The standout freshman has a bevy of moves in the post that he uses and he has the quickness to blow by any defender on the perimeter, creating a headache for opponents as they decide how they want to guard him.

“I think he rises to the occasion,” Gottfried said about what makes him so great. “I think the better the competition, the better he is. I also think that he’s got great timing, he rebounds the ball so well because the ball touches his fingers, he gets every one of those. Then he has an uncanny way to score and he’s difficult to defend. I think there’s a lot of things like that.”

If there is a weakness to his game, it is from the foul line where Diane is shooting just 51.4 percent on the year. If he finds a way to improve in that area, which Diane said he is “working a lot” to try to do, there is no telling how good he can be.

“I think that if he were a better foul shooter, he’d probably be leading the nation in scoring, quite frankly,” Gottfried said. “And I think right now that’s the biggest area of improvement that he needs to concentrate on.”

Fluker, meanwhile, is the reigning two-time winner of the award and currently leads her team with 15.9 points per game, 11 rebounds per game, 3.6 blocks per game and 28.4 minutes per game. In terms of conference ranks, she is third in points, first in rebounds, first in blocks, and 11th in minutes, while she leads the nation in blocks (58) and blocks per game.

These numbers are surprisingly pedestrian for the 6-foot-4-inch center, who, except for blocks, has regressed in almost all of her counting stats from last year, and head coach Jason Flowers attributes that to multiple things seemingly outside of Fluker’s control.

“Obviously as a sophomore and a junior, you win Player of the Year and people try different things, and she’s seen a lot of different defenses,” Flowers said. “There’s been times where she’s been double and triple-teamed before she ever has the basketball and so as a team, we’ve tried to make some adjustments … The other thing that we have, we’re deeper from a standpoint of who can score the basketball on our team so we don’t have to rely on her as much, just dumping it into her every single possession.”

As Flowers said, many teams have resorted to double-teaming, sometimes even triple-teaming Fluker whenever she receives the ball, forcing her to either pass the ball or attempt to take on multiple defenders to get a shot off. Either way, Fluker has had to work a little harder this year to earn every basket.

Even with the reduced minutes and points, Fluker has managed to set a couple of records during the course of this season.

In a loss to LMU on Dec. 7, 2018, she reset the record for points by a women’s basketball player at CSUN and now has 1,862 career points, pushing her ever closer to the top 10 for career points in the Big West.

Some other records that Fluker holds among active players are most career rebounds (1,248), highest rebounding average (11.3) and she is tied with Iowa’s Megan Gustafson for career double-doubles.

Speaking of double-doubles, Ghizal Hassan, the radio voice of CSUN basketball, posted a tweet on Jan. 15 that said, “With Lamine Diane (10) and Channon Fluker (11), CSUN is lone D-1 institution with both Men’s and Women’s player with ten or more double-doubles, through today’s games.”

With Lamine Diane (10) and Channon Fluker (11), CSUN is lone D-1 institution with both Men's and Women's player with ten or more double-doubles, through today's games.

With a stat like that, it’s hard to fight against the idea of both Diane and Fluker winning their respective Player of the Year awards, proving to the nation that CSUN is not your typical mid-major school.