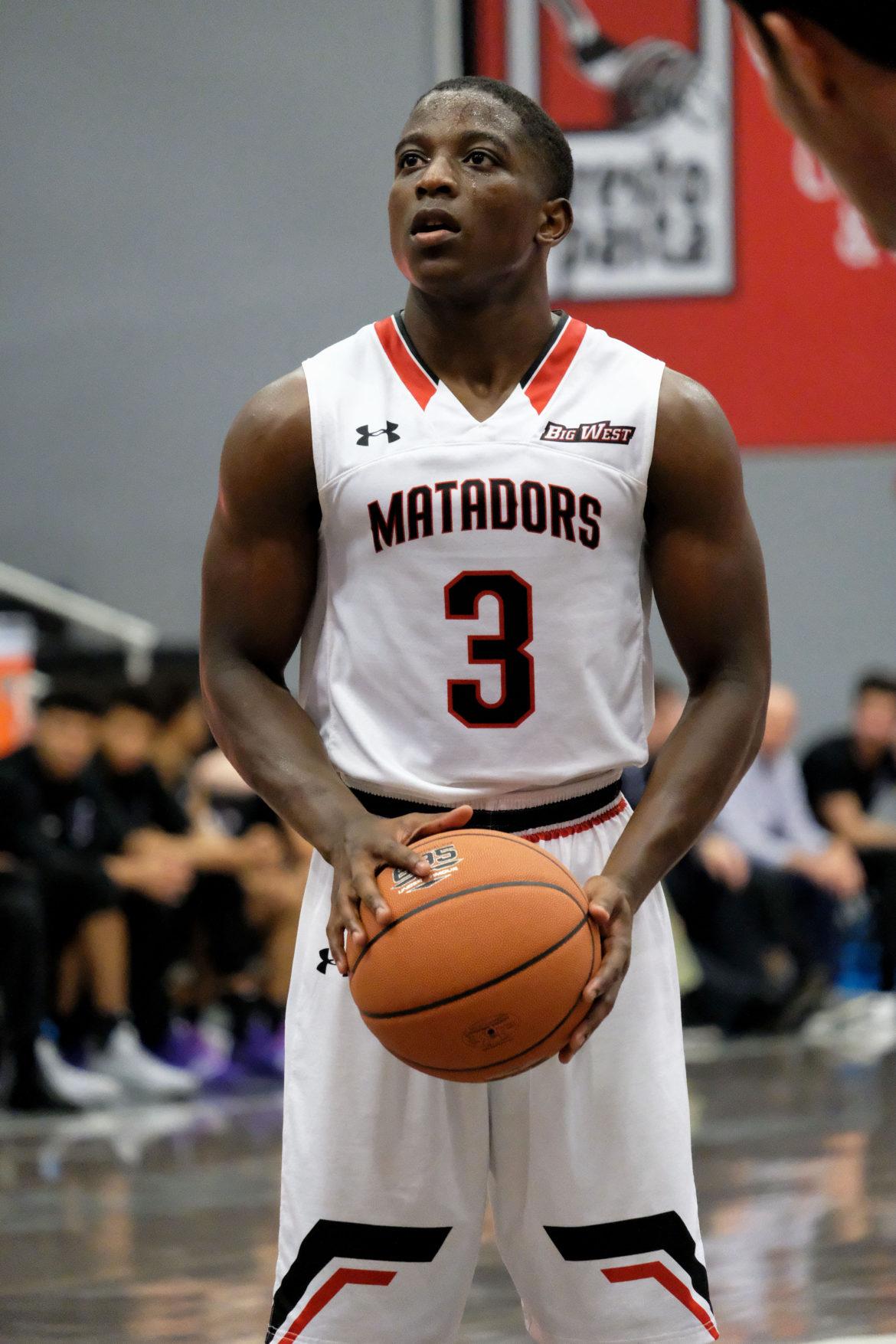 Sophomore Terrell Gomez waits to shoot a free throw against Portland on Nov. 17, 2018. Gomez made a career-high 7 3-pointers in the loss to Hawaii. Photo credit: Jose Morales

Sophomore Terrell Gomez hit a career-high seven 3-pointers on his way to scoring 30 points, but it was not enough as Hawaii beat the Matadors 84-79 in their conference home opener on Thursday night.

The Matadors dug themselves a big hole early, trailing by as many as 15 points in the first half before cutting the lead to seven going into halftime.

CSUN then ran out of the gates to take a two-point lead early in the second half, though it would be the last lead they would hold as the Rainbow Warriors went on a 24-12 run in the middle of the second half and held off a late Matador comeback to win by five.

Gomez managed to make things interesting late in the game after hitting two big 3-pointers to cut the lead to one with 12 seconds left, but Hawaii made all of their free throws after CSUN intentionally fouled in an attempt to get the ball back as quickly as possible, leaving the Matadors a slim chance to get anything out of this game.

“I thought we got out to a slow start and once we got out of that kind of slow start, I thought our guys really played hard and competed right to the end,” coach Mark Gottfried said. “We had two nice wins (against Riverside and Cal Poly). I think we came out and we played a little bit like we didn’t have the energy early. And then I thought midway through the first we kind of got going. Second half, played pretty well. We just seemed like we were kind of fighting uphill the whole night.”

Redshirt freshman Lamine Diane had another double-double, his 11th of the season, though it took an immense second-half effort to do so.

He shot just 4-10 in the first half and scored only nine points while recording only one steal and no blocks. In the second half though, Diane flipped the switch, going off for 19 points on 9-18 shooting to go along with 10 rebounds, two assists and a block.

Diane would finish with 28 points and 16 rebounds, helping Gomez to almost complete the comeback, but just falling short.

“(Coming back is) good because a young team usually hangs their heads,” Gomez said. “Earlier on in the season, when we were down by this much, we would have hung our heads. But this is good. A young team able to come back and erase a 15-point lead, this is good.”

The other big storyline from this game was the Matador debut of freshman Ron Artest III, the son of former NBA champion Metta World Peace, who made his appearance with six and a half minutes to go in the first half.

He would make a swift exit though, as he committed three fouls in as many minutes, forcing him to the bench until the second half when he committed two more fouls and fouled out after just eight minutes of action.

Artest was ineligible to play for the first half of the season and said he was “anxious to get out there,” which probably contributed to his inability to remain from fouling.

“I saw a few flashes of his father with the aggression,” Gomez said, laughing. “He can’t foul as much but I like how he brought that kind of aggression to the team. Coach is proud of him, how much heart and soul he brought. We just to get him to get his fouls down, play aggressive the same way but just without fouling.”

Gottfried feels that Artest’s rough start was justified considering how little game action he has had in the past year, but that he can still make some solid contributions down the stretch.

“(Artest) did a nice job,” said Gottfried. “He rebounds. He plays hard. Obviously, it’s only his first game to play. It’s hard when you’re a freshman at this point in the year but I did think we discovered we got a guy that can help us a little bit.”

After the loss, the Matadors now have a record of 8-11 (2-1 Big West) and are sitting in third place in the conference standings.

As was the case before the start of conference play, CSUN is pacing the conference in both points scored and points allowed, with 241 of each.

This should not be a surprise to anyone who has watched the Matadors play this year as they tend to score in bunches early, followed by a huge run by the opponent to take a lead before attempting to come back with some more volume shooting.

This back-and-forth playing style has done wonders for the Matadors’ offensive stats, as they have the two of the top five leading scorers in conference play in Gomez (28.3 PPG) and Diane (23 PPG), while freshman Darius Brown II is second in assists with seven per game.

Obviously, Gottfried would prefer that his team lock down on defense rather than try to outscore every opponent, but with such a young team at his disposal, these lessons on the court will continue to come and could help them out come time for the Big West Tournament in March.

The Matadors are home for their next two games, playing UC Irvine on Saturday, Jan. 19 at 3 p.m. and Long Beach State on Wednesday, Jan. 23 at 7 p.m. (available on ESPN3).