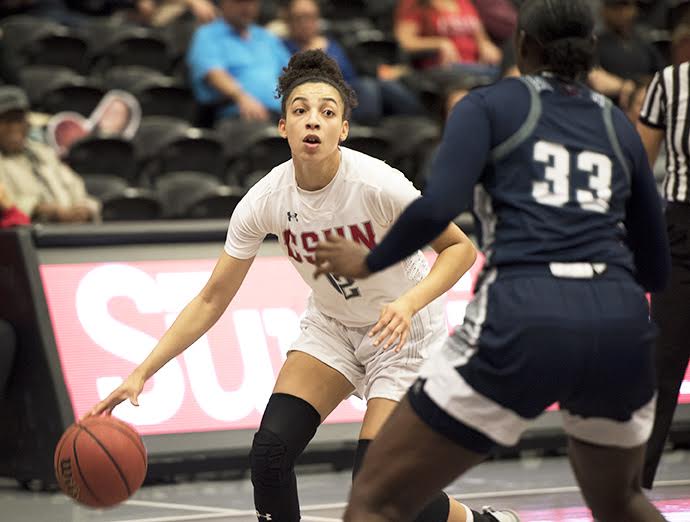 Sophomore Meghann Henderson looks for an inside pass against Loyola-Marymount on Dec. 7, 2018. Henderson had nine points in the Matadors' win over Riverside on Saturday. Photo credit: Yohana De Leon

The women’s basketball team held on after a late surge in the fourth quarter to defeat the Riverside Highlanders 69-56.

After being up as much as 29 in the second quarter, the Highlanders closed the gap to seven points in the fourth quarter.

Coach Jason Flower believes this revolves around maturity and the ability, or inability, to close out games.

“We haven’t shown the maturity to continue to do things well once we’ve built a lead,” Flowers said. “It’s come up in several games and we gotta figure out between now and Thursday.”

Even though the Matadors won by 13, their leading scorer and only player averaging more than 10 points (14.9) a game, senior Channon Fluker, was held to zero points in the first half and just one made field goal all game.

Fluker came off the bench in this one and would finish the game with four points, nine rebounds, two steals and four blocks, showing that she can still affect the game on defense when her offensive game isn’t working.

It would be senior Serafina Maulupe who would be the star on offense for the Matadors this time. She finished with 14 points, going 5-6 from the field, including three made 3-pointers.

“Just doing my job and doing what I can to help the team win and be able to set the tone,” Maulupe said about her mentality in games like this one. “Being the veteran on the team I have to be able to set that tone and have that mentality.”

At this point in the season the Matadors are 9-9 and still very much alive in their fight for the Big West Championship. They currently sit with the fourth best overall rank in conference behind Cal State Fullerton (10-6), UC Davis (11-6) and UC Irvine (12-4). However, they are tied with Davis as having the best Conference record at 3-1.

“We’re in as good of position as anybody in conference, obviously being 3-1 right now,” Flowers said. “We have a good chance as anybody. Is it an uphill battle? It’s always an uphill battle. Winning isn’t easy and that’s why everybody doesn’t do it. So we gotta be willing as a group to do things that it takes to win every single day. A lot of it comes down to sacrifice, a lot of it comes down to work.”

The Matadors will host UC Davis on Thursday, Jan. 24 in at 7 p.m. at the Matadome.