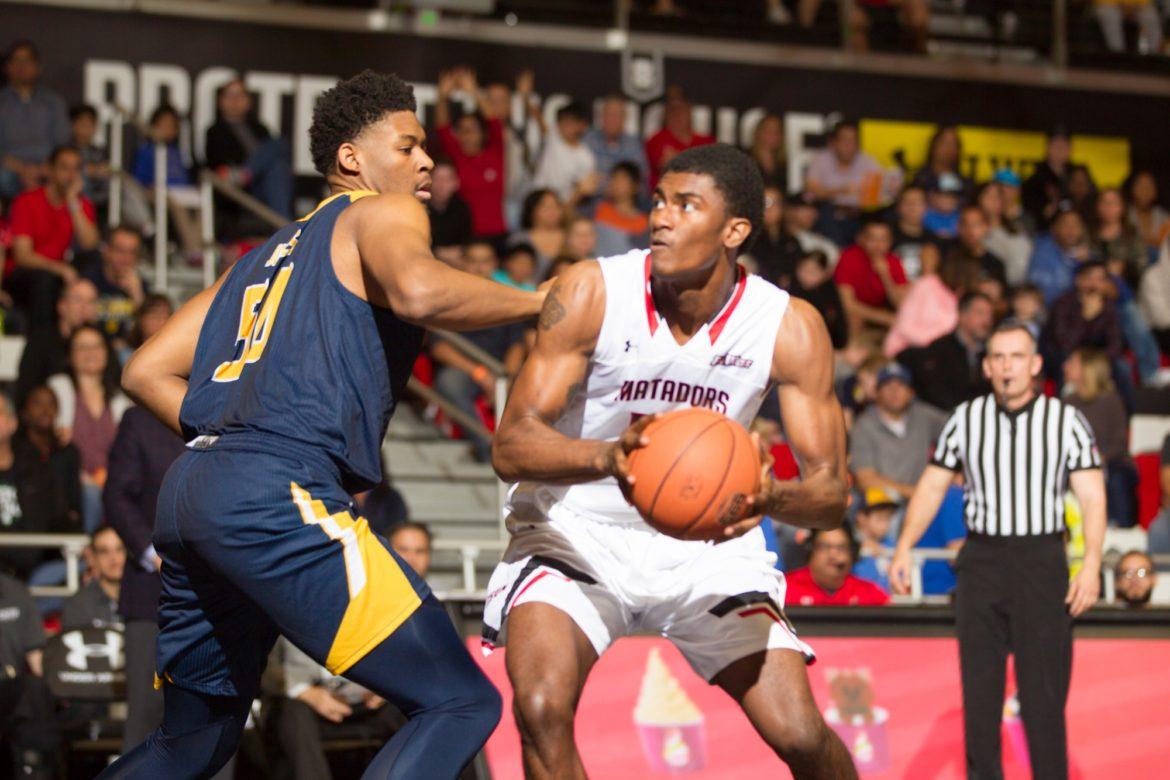 Freshman Ron Artest III attacks an Irvine defender in the 68-74 loss on Jan. 19. Artest had to wait to make his debut until Jan. 17 against Hawaii, where he fouled out after just eight minutes. Photo credit: Shae Hammond

Metta World Peace, the former NBA champion with the Los Angeles Lakers, called up his son’s high school basketball coach after his freshman year to find out how his son was doing, only to find out that he did not play.

“He was mad,” laughed Ron Artest III about his father’s reaction. “I (had) moved to Indiana, stayed with my mom and I was supposed to play basketball for that school, but my dad ain’t live with me, so I was like fuck it, I’m not playing.”

The late bloomer moved to California his sophomore year, attending Palisades Charter High School, where he played in organized basketball for the first time. “When I was a freshman I was out of shape, I was kind of fat,” Artest joked, “so that was just me being lazy, (but when) I got out here, my dad got on me.”

Artest showcased promising signs of player development by honing his skills over the course of just a few years, despite the transitions to multiple new schools.

“I seen him grow in terms of his awareness. I see him really … focused by the little things and his game is gonna catch up to his body,” World Peace said. “But I seen a lot of growth and I am really happy with the growth.”

Perhaps his aptness for the game of basketball is embedded in his DNA. Perhaps he was cultivated when he watched and observed legends such as Tracy McGrady and Kobe Bryant exclusively practice. Perhaps it was C, all of the above.

Although Artest shared the same name as his father for most of his life, plays the same sport as him and has strikingly similar facial features as his father, Artest is paving his own way, and playing his own game.

“The main thing is hard work and to teach him work ethic,” World Peace explained. “That’s what I try to help him with, and not so much what his dad did you know? But it’s like work hard, be smart.”

It was only right for the 6-foot-7 true freshman to commit to playing at CSUN. His decision was driven by his intent of staying close to his home, family and the convenience of training with his father.

Despite having to wait until mid-season to make his debut, not playing his first game until the 79-84 loss to Hawaii on Jan. 17, Artest’s addition to the roster is indisputably an upgrade for the Matadors.

The hope is that they will reap the benefits from his ability to rebound and finish at the rim, though it may take some time for him to get used to the college level as his debut performance showed, fouling out after just eight minutes of action.

“I saw a few flashes of his father with the aggression,” sophomore Terrell Gomez said with a chuckle after the loss to Hawaii. “Coach is proud of him, how much heart and soul he brought.”

Head coach Mark Gottfried talked about what Artest can add to the roster after his debut, noting how he liked how hard he played despite fouling out, though also tempering expectations for a freshman who at that point had played less than one half of Division I basketball.

“He plays hard … It’s hard when you’re a freshman (to just start playing) at this point in the year,” Gottfried said, “but I did think we discovered we got a guy that can help us.”

With a unique and unorthodox basketball journey, the young, auspicious hooper has one dream. He looks down as he reflects, and then looks up, “(The NBA), that’s it, that’s the only goal.”