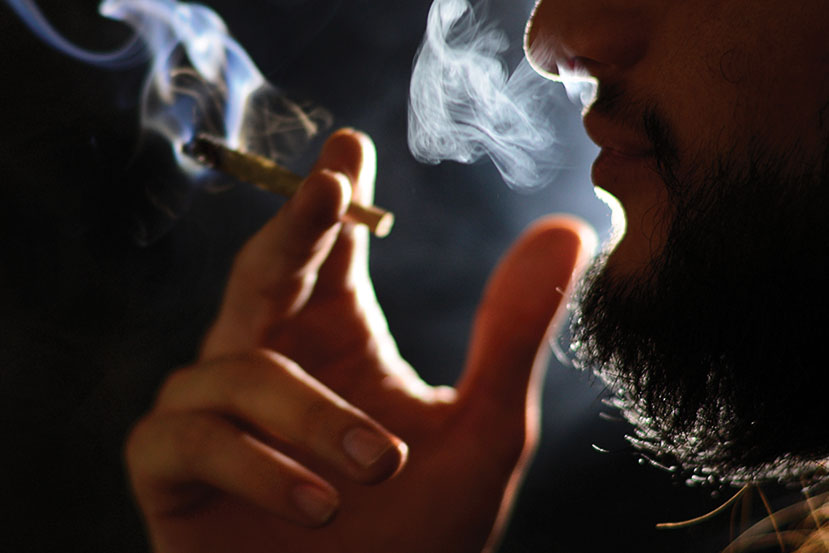 For Edgar Ascencio, it came down to cost and location. He simply could not afford to buy weed from licensed, commercial shops in Southern California.

Living in Thousand Trails Trailer Park in Agua Dulce, the 22-year-old musician and film student is in a peculiar position. Being so close to LA, Ascencio has access to arguably some of the highest quality dispensaries in the world, but the high prices and taxes have pushed him away from the legal market, plus his friendly street dealer lives much closer to him.

“I would go to a shop and spend $75 on a quarter ounce of pot that was still packaged when I could buy three times as much from my friend for that same price, check the weed, and know I’m getting good quality,” he said.

Ascencio is feeling the pain of many California stoners. Since weed became recreationally legal in the state, the black market remains stronger than ever due to the high cost and high tax rate of legal marijuana in California, where some cities impose up to a 45 percent tax rate on any cannabis purchase.

While experts predicted the passing of Prop 64 would destabilize the illegal cannabis industry in California, all signs point to the opposite so far. A consumer study done by Eaze Insights found that 1 in 5 recreational users buy weed off a black market source in California, and 90 percent of those buyers said the high cost and taxes were the reason.

According to a list released by the Bureau of Cannabis Control (BCC), 954 cannabis businesses in California have been sent Cease & Desist letters from the BCC, compared to only 493 legally licensed shops across the state.

Former Governor Jerry Brown predicted the state would make an estimated $175 million in tax revenue off cannabis sales during the first six months of 2018, but sales have yet to meet those figures. According to the California Department of Tax and Fee Administration (CDTFA), the state made roughly $134 million in tax revenue from January through June. While the numbers improved from $60 million in January-March to $74 million in April-June, this is still roughly 24 percent less than the projected revenue, and the state blames this on the illicit market.

The term “black market” can mean various things, from a street dealer to full blown shops and delivery services opening without licenses, and even shops who are in the process of applying for licenses. Unlicensed shops build customer bases by selling the weed cheaper and charging no taxes. Ascencio visited many of these while he lived in North Hollywood.

“I had four different shops that I really liked, they had really good quality and would be willing to hook people up without charging taxes, they were all really cool people that made sure their product was good quality, but they all got shut down eventually,” he said.

Another common way that cannabis users get around taxes is by purchasing a medical card to buy from legal dispensaries that do not charge taxes.

“Before I started selling I had a med card and bought from medical shops in Sylmar and never had to pay the tax,” said Mackenzie Larsen, who sells to a small group of his friends in Lancaster. “Medical shops are non-profit and they do not tax medical patients.”

Larsen’s customers can buy an eighth of an ounce of cannabis for around $20, while a customer might pay upwards of $50 for an eighth at a licensed shop, with no guarantee of quality. For his customers, it comes down to convenience.

“Obviously I can sell it cheaper, and selling it to my friends they know they are getting good quality bud,” he said. “Buying from shops you never know.”

Quality control among commercial shops has recently come into question over packaging regulations, new rules that went into effect on July 1 mandated that all products received from a distributor must be pre-packaged. While the regulations focus on child-tampering, some in the industry worry that this will hurt the quality of marijuana in California.

“This stuff is grown in a warehouse and they give the plants as little nutrition as possible to survive,” said Patrick Stark of Enigma Labs. “They do not understand that each different flower has a unique medical purpose, and had unique effects for different people.”

He adds, “If I go to the grocery store to buy tomatoes, of course, I want to look at them before I buy them. It’s the same thing with cannabis. If they keep this system with recreational licenses, the quality of weed is going to plummet in California.”

In Larsen’s case, experiences buying from commercial shops pushed him away from buying through licensed dispensaries. “I went two or three times but they were not good experiences at all,” he said. “For the prices, they charge the weed is not worth it.”

Others have found shops that work for them, like 28-year-old Lolli Reyes from Granada Hills.

“I have a place right next to my house where the guys are really cool and are not afraid to hook people up,” she said. “They always give me free joints or blunts and even the free stuff will get me really stoned.”

California has recently updated several other regulations regarding the state’s cannabis industry, with some of the regulations appearing to crack down on third-party delivery services like Weedmaps or Eaze.

These online-based companies have databases of nearby dispensaries that advertise their products on apps or websites and can help set up deliveries. Weedmaps specifically has created controversy because it is known to promote unlicensed shops. The new regulations drafted would prohibit the delivery of marijuana by unlicensed third-party companies.

In some cases, businesses cannot get approved for a license for various reasons, and this has led to the shutdown of many farms or dispensaries that continue to do business while waiting for a license.

“All of these people are in the process of getting a license, but if the state will not give them out how are they supposed to get it?” asked Stark. “Everybody making money in the business is trying to get their license.”

For those in the weed business, the decline of the legal market is no surprise. According to Stark, there is a lack of understanding within the government regarding cannabis.

“They have listened to these lies that the Drug Enforcement Agency (DEA) tells them, that every plant is worth $2,000,” he said. “As someone who has grown thousands of plants, you’re lucky to get 100-200 bucks out of each plant … All marijuana looks the same to the government, they do not understand the subtle differences between sativas, indicas, and the many different hybrids that exist.”

California smokers still face some hurdles despite legalization. Over 60 percent of cities and counties in California still ban the use of recreational marijuana, and in September, charges were brought against 105 dispensaries in LA alone for operating without licenses.

While those in the business continue to blame over-regulation and taxes for strengthening the black market, California has proposed another round of regulations that are expected to go into effect in December in their attempts to cripple the state’s black market.

“The government thinks we are a bunch of heroin addicts who will spend ridiculous amounts of money on weed, but people are always going to find the cheapest way to smoke,” said Larsen.