Women’s basketball keeps pace with Davis after win over Fullerton 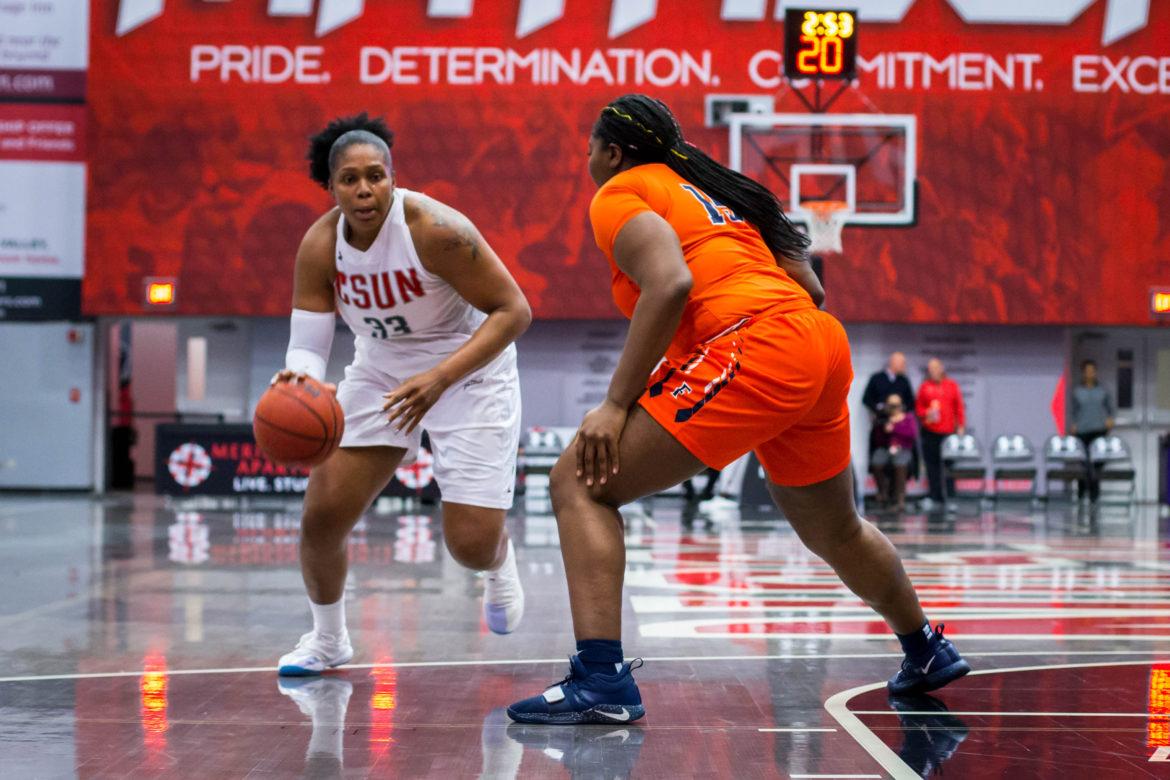 Senior Channon Fluker attempts to dribble past her opponent in the win over Fullerton on Thursday. Fluker scored 16 points and grabbed 11 rebounds to record her 70th career double-double. Photo credit: John Hernandez

The Matadors beat the Titans 74-44 on the back of senior Channon Fluker’s 70th career double-double and a season-high 50.8 percent showing from the field.

The Matadors now move to 11-10 overall and 5-2 in conference play after the win, maintaining their spot in second place in the conference standings.

The story of the game was the Matadors’ clamp-down defense, forcing multiple shot clock violations and keeping the Titans to shoot 29 percent as a team.

While the Titans are usually a very solid three-point team, it did not show against the Matadors, as they were only able to make two for the game, good for three less than their average, and shot 12.5 percent on those attempts, good for 19 percent worse than their average.

Another takeaway was this was the first time all year that the Matadors shot above 50 percent.

“I thought we were efficient offensively, I thought we finished well around the basket,” Flowers said. “We didn’t leave many points on the board (as far as missed layups), and our guards made shots on the perimeter. When those two things come together you have a greater chance to shoot a high percentage.”

Fluker came out the gate firing on all cylinders, scoring six points, a block and a steal in two and half minutes. She would finish with 16 points, 11 rebounds, six blocks, a steal and a three-pointer.

“She definitely can (shoot the three),” said Flowers. “It’s a catch-22. She’s been in the gym, she’s worked on her game and that three isn’t a surprise whatsoever for anybody who’s been to our practices and seen her shoot the basketball. But at the same time you don’t want to take the most imposing post player in our conference and have her running around the perimeter for the majority of the game.”

The Matadors would also get significant contributions from juniors Eliza Matthews and De’Jione Calloway.

“It was those little details that I had been hearing all week and making sure that I focused on those and the results came,” said Calloway. “We just went hard and rebounded and did our job.”

Flowers is very confident in his team going forward and with career nights from both Matthews and Calloway, he is excited for the future.

“I think they’re capable (of doing more). I think they’re more than capable,” he said. “I think Eliza is somebody who has a high motor and does a really good job around the basket, and did a really good job of finishing tonight. De’Jione’s the same way. Both of them are really athletic. De’Jione’s, if she’s not the most powerful athlete in the conference, she’s right up there. When they’re efficient around the basket and you add what Channon does, we’re tough to guard.”

At 5-2 in conference play, the only team with a better record is UC Davis; however, coach Flowers isn’t concerned.

“There’s only one team we’re concerned about and that’s the team that’s in that locker room,” he said.