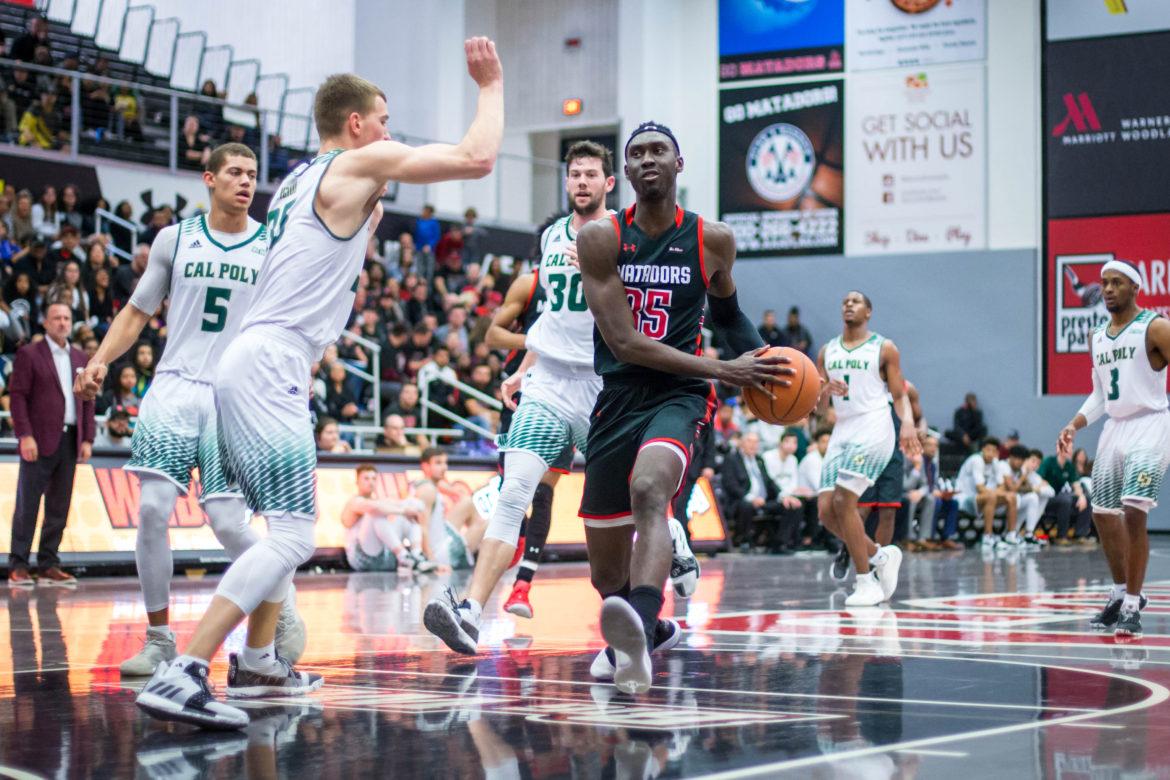 Freshman Lamine Diane attempts to go around a Cal Poly defender on his way to the basket in the win over the Mustangs on Saturday. Diane got his 13th double-double of the season, recording 22 points and 11 rebounds in just 22 minutes. Photo credit: John Hernandez

With the distasteful remnants still lingering from nearly blowing a 20-point lead on Jan. 12 at Cal Poly, the Matadors were able to redeem themselves on Saturday by maintaining a near wire-to-wire victory, defeating the Mustangs 83-65.

The narrative that surrounds the Matadors this season has been that they lack consistency in being able to close out games by either blowing big leads or starting the game lackadaisical and trying to play catch up in the second half until it’s too late.

“I just think that we learned the hard way,” said head coach Mark Gottfried. “We’ve had leads that we’ve lost and we’ve got to learn how to be better, and I think we’re getting better at that.”

“Everybody eats” seemed to be the theme of the night for the Matadors, as the players all proactively shared the ball. The Matadors collected 13 overall assists, with five players scoring in double digits.

“That was a pretty good collective group effort by everybody,” said Gottfried. “I thought a lot of guys stepped up and did a nice job. We had such a bad first half against Fullerton (on Wednesday), I think the emphasis was just executing our offense with better cuts and passing and better screens and timing. We were a little more patient so I think offensively we were a lot better and I thought defensively we were too.”

The Matadors were tight defensively all night, holding the Mustangs to 39.3 percent from the field and 33.3 from distance.

“We didn’t give them a lot of easy ones. Any basket they had, they really had to earn them,” said Gottfried.

Freshman Lamine Diane was doing what he always does: score. He recorded his 13th double-double of the season, with a game-high 22 points. However, with less than 15 minutes left of the second half, Diane was forced to the bench after receiving his fourth personal foul. Although a key factor for the Matadors, Diane’s absence allowed players to step up and take shots.

“Other guys stepped up tonight … Lamine didn’t have to play as much minutes,” sophomore Terrell Gomez said. “We had five guys in double figures and that’s what we need.”

Freshman Darius Brown II and grad transfer Cameron Gottfried both had one of their best games this season, combining for 22 points.

Gottfried pulled down six rebounds, above his season average of 4.7 per game, to go along with his 11 points.

Brown, though, was especially impressive, receiving praise from coach Gottfried after the game.

It’s safe to say the Matadors seem to play their best when Brown is performing at his full potential and embracing a more aggressive style of play.

“I told him, when he’s being a little bit more aggressive, it helps us,” said Gomez. “We can’t just be a two-man team. Other guys got to step up.”

Gomez had an unusually poor shooting night, going just 2-13 from the field. However, he said, “2-13 happened in the right game because other guys are making shots so I’m glad I didn’t shoot the ball that well.”

Junior Rodney “Rocket” Henderson struggled with his shots against Fullerton, ending the night 0-8 from the field, however, he made amends by turning things around against the Mustangs, finishing with 14 points and four rebounds.

The Matadors now have a 10-12 record (4-3 Big West), sitting in a tie for third place in the Big West Standings with Hawaii, though they are just one game back of both Santa Barbara and Fullerton in second.

CSUN could quickly jump ahead of the Gauchos with a win at Santa Barbara in the midweek, while the Titans have their own test, going up against first-place Irvine.

If the Matadors hope to get the best of Santa Barbara, they will need their star freshman to be on top of his game.

Since the start of conference play, Brown has averaged a conference-leading 6.7 assists per game while turning the ball over just 1.4 times per game. That averages out to a solid 4.7 assists per turnover, the second-best ratio in the Big West.

Matadors and Gauchos tips off on Wednesday, Feb. 6 at 7 p.m.

CSUN will then travel up north to face UC Davis on Wednesday, Feb. 13 at 7 p.m. before coming back home for a game against Fullerton on Saturday, Feb. 16 at 7 p.m.