Behind the mics of ‘LA Meekly’ 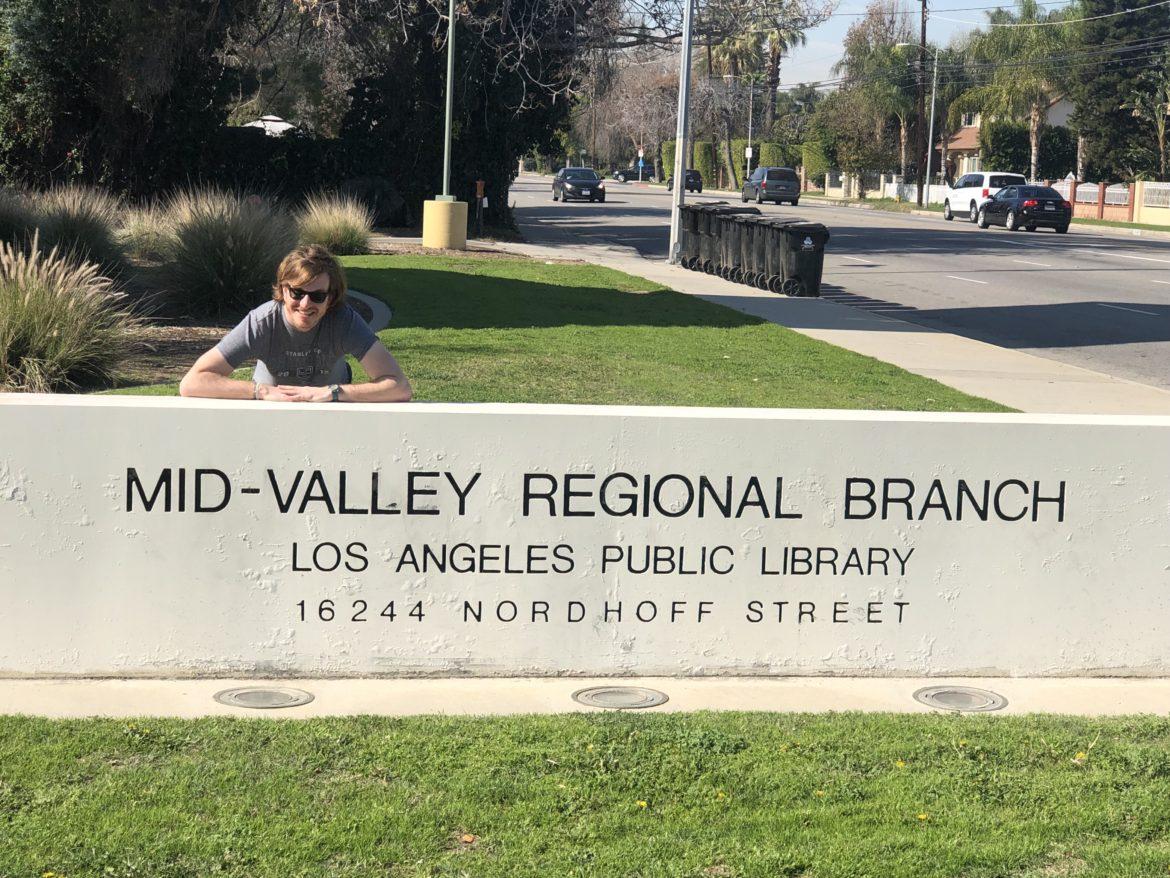 Daniel Zafran at the library he worked at for 3 years on January 29.

CSUN alumni go into depth exploring all facets of LA history, from the corruption that took place in the City of Bell to the first Hot Dog on a Stick on the Santa Monica Pier, in their monthly podcast, “LA Meekly.”

The podcast was founded in 2013 after Greg Gonzalez and Daniel Zafran met in a creative writing class while attending CSUN. Zafran was impressed with Gonzalez and chased him out of the classroom after he heard his script, “Bonnie and Clyde Meet the Wolfman.” The podcast began after the duo shared a mutual appreciation for stand up comedy as well as the history of LA.

“Have you ever met someone from New York? And you can tell how proud they are to be from New York? That’s the same feeling we want to give to people from LA,” explained Zafran.

Zafran graduated with a degree in screenwriting, which gets put to use frequently when writing the skits that come before the history in the podcasts. The anatomy of the “LA Meekly” podcasts begins with an introduction, a comedic skit, then to the flesh of the podcast, which consists of the historical facts and stories with humorous innuendos and puns sprinkled throughout.

The recording takes place in the back house of Gonzalez’s Echopark home. The editing Zafran takes care of, which is all self-taught with the help of YouTube. Each half of the duo, however, spends three weeks compiling information from different city officials, public archives and old texts.

Gonzalez stresses upon one of the things he’s learned from his experience with the podcast: “Just be nice to people. You never know when a connection is going to help you and it’s important to keep the lines of communication open.”

The duo has achieved a number of milestones throughout their career. Zafran recollects one of his favorite memories as when he received an email from a fan thanking the two for covering the history of Chinatown. The email thanked “LA Meekly” for giving her culture and heritage recognition she felt it deserved.

Another highlight of the duo’s career took place on the Comedy Central Stage, where Gonzalez and Zafran had the opportunity to record one of their shows in front of a live audience. LA Mag recently published an article describing “LA Meekly” as a “Podcast about L.A. You Must Subscribe to ASAP.”

On a more personal note, one of Zafran’s favorite writers, Carl Tart, reached out to the pair with praise and offered to be a guest on the show. As of the most recent episode, the duo also picked up their first sponsor.

“Don’t try to do everything, be patient and try not to get burnt out,” Gonzalez said. “As long as you keep on trying and being persistent things start to pay off. Just keep putting the work in.”

“Everything they teach you in school, about making deadlines, developing a good work ethic, it’s all crucial to the process,” Zafran added.

In response to this Gonzalez laughed and said, “And if you don’t have a good work ethic find someone who does and stick with them.”

The podcast has not been without problems, though. The most difficult and recurring issue the duo has faced is convincing people that LA is full of history and culture.

“Not only was Glendale a sundown town,” Gonzalez said, “but it also had swastikas on the lamp posts.”

Another issue the podcast faces is breaking out of their niche to appear to a more widespread audience.

“Everyone who’s from LA or even all the people who move to LA should know about the city, as you appreciate and feel pride in the city once you know the culture and history behind it,” Zafran said.

The duo each have a day job at different libraries, which is ideal for research purposes. Coincidentally, during their time at CSUN, they were both employed at the information desk in the Oviatt Library.

The future of “LA Meekly” remains in telling the strange history behind LA, with future episodes lined up, consisting of more field trips, more live shows and not holding back on the comedic commentary.

You can listen to the podcast on Spotify, Apple and Stitcher Radio.