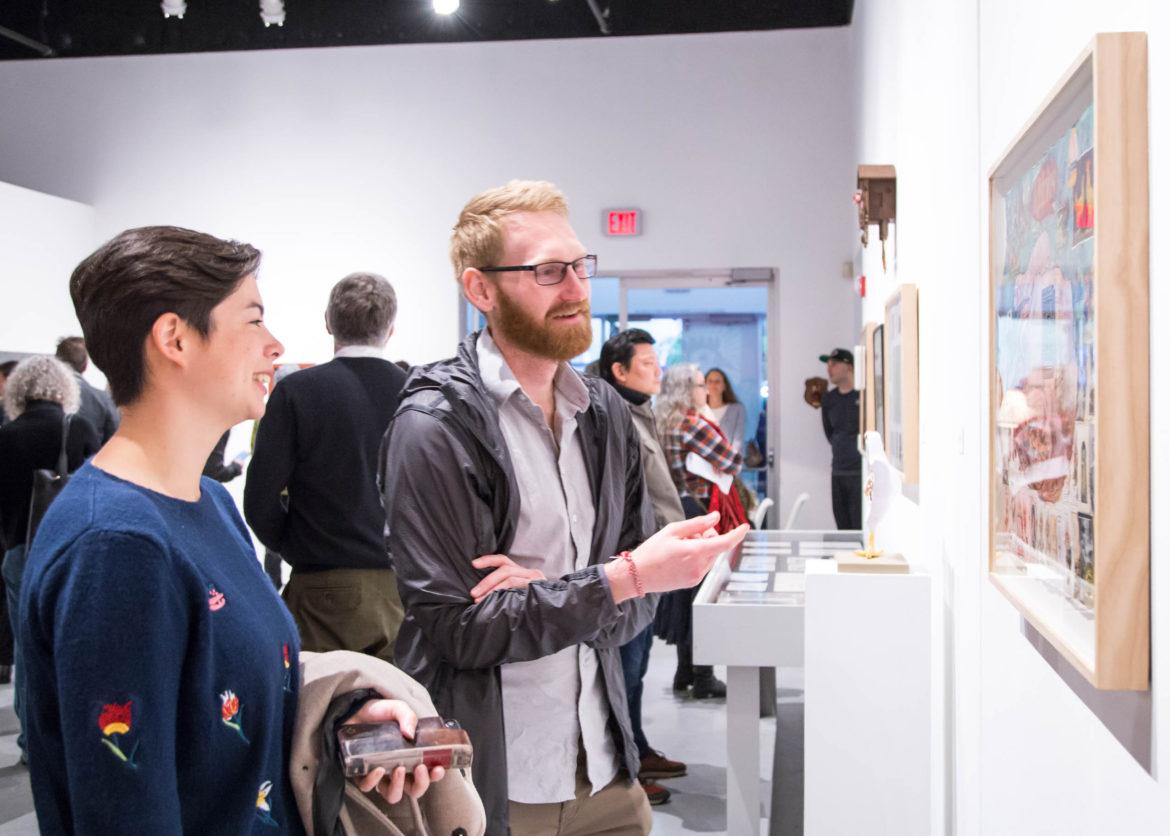 CSU Channel Islands alumni Dani Kwan (left) and Eamon Stewart (right) observe "Martyr Hen," a collage with holy cards and a metal icon, by Jeffrey Vallance. “It was beyond anything I expected,” said Stewart who, along with Kwan, had been informed of the exhibition by a former professor. “It’s fantastical and so sacrilegious. It's hilarious.” Photo credit: John Hernandez

When people hear “Blinky: The Friendly Hen,” they probably picture a cute cartoon hen. In reality, “Blinky” is a headless frozen chicken at a supermarket.

CSUN’s Main Art Gallery is hosting the 40th Anniversary of “Blinky: The Friendly Hen” exhibit. The exhibit consists of a Relic Chamber, a Blinky Theatre, Blinky book editions, a gift shop filled with Blinky souvenirs and many more surprises for guests. The exhibit is open from Feb. 2 to March 16.

The art was contributed by not only the artist, Jeffrey Vallance, but also by international artists and CSUN students, faculty and staff.

Vallance is a CSUN alumnus, who earned his B.A. in art in 1979. “Blinky: The Friendly Hen” started out as a class project but then grew to be very successful, and now his work is exhibited in galleries all over the world.

The exhibit is based on his book, also called, “Blinky: The Friendly Hen.” Vallance explains that the Blinky project is when he goes to Ralph’s and buys a frozen chicken, then goes to the Los Angeles pet cemetery and buries it with a complete funeral service.

During a gallery talk, the artist explained the inspiration behind his project. Vallance wondered about how society determined what animals were considered pets or food, so he decided to switch the groups to see what the reaction would be. Because of his project, he was interviewed on “Late Night with David Letterman.”

He also explained the different sections of the exhibit as well, each one having a different sub-theme that coincides with the main theme of “Blinky: The Friendly Hen.”

During his project, Vallance researched and found evidence in the Bible of Jesus Christ referring himself to a Mother Hen. This inspired one section of the gallery to hold art depicting what Vallance called, “The Sacred Hen.” The other section was inspired by the artist’s research on religions that worship chickens. The last one was of artwork created by Vallance’s colleagues.

There was an additional gallery made up of CSUN students’ art. Art major Michael Castaneda contributed, saying, “I did create (my art) within the ideas I continually work with but also primarily for Blinky.” When asked about the exhibit’s reception on Feb. 2, he said, “In my mind, we’re all at a mourning ceremony for Blinky.”

“You have to be nuts,” said Vallance as he referred to his entire 40 years of working on the “Blinky: The Friendly Hen” project. Because of this project, he was able to travel the world and create even more abstract projects. He said that when it comes to interpreting the celebrated hen, “People do interpret it on their own, some see this as vegan (related) … other people see it as funny. Others see it as spiritual.”

Because of Blinky, the artist has seen many interpretations, such as a video that is being shown at the Blinky Theatre, of people protesting against the consumption of farm animals at supermarkets. They go as far as picking a chicken to put in a cardboard coffin while chanting, “It’s not food, it’s violence.”