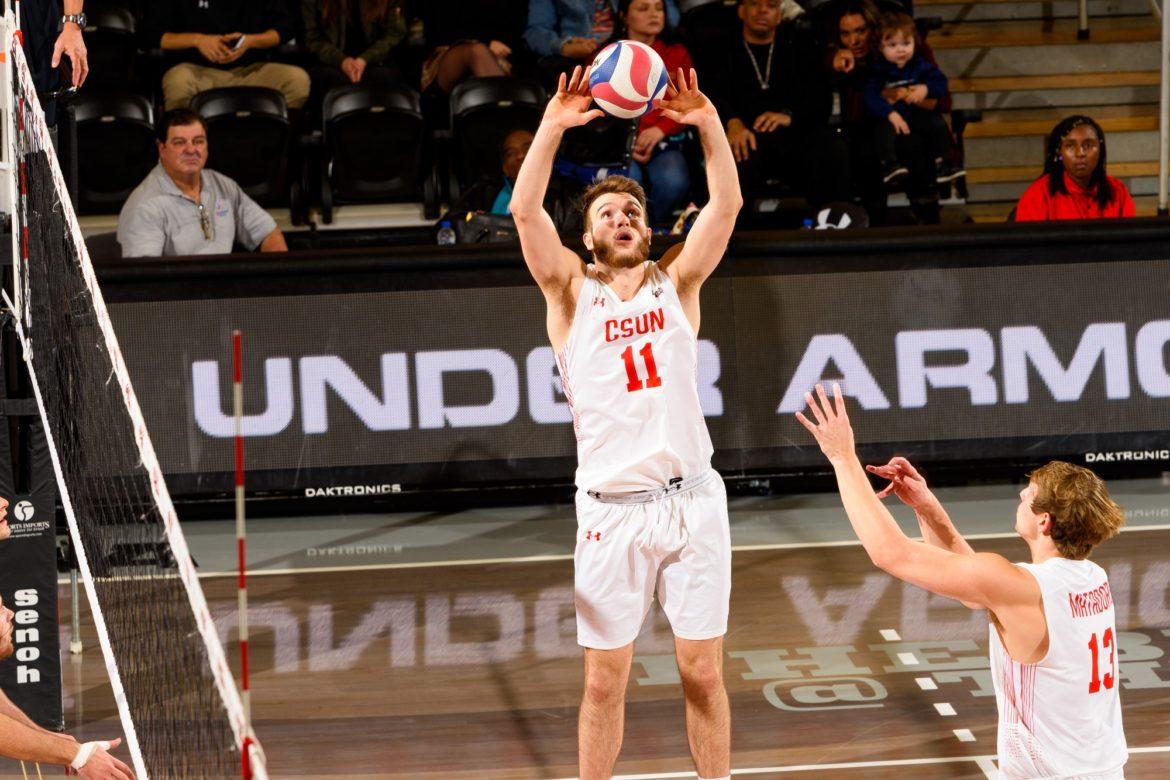 Freshman Taylor Ittner sets up fellow freshman Paul Rzepniewski for a spike in the win over Cal Lutheran on Feb. 8. Ittner has been a huge lift for the Matadors early on, ranking fourth in the Big West and 21st in the nation with 9.06 assists per set. Photo credit: Paul Trafecanty

Redshirt freshman Taylor Ittner is setting up CSUN’s men’s volleyball team for a run at a national championship.

Ittner, a setter, is considered one of the best freshmen in the Big West Conference, earning recognition for his high number of assists, ranking 21st in the nation with 9.06 per set.

Despite redshirting his freshman season, sitting on the bench helped Ittner learn the pace of the college game. Entering this season, Ittner has started every game, ranking fourth in the Big West conference in assists per set and second in total assists with 448.

His assists have created opportunities for his teammates to finish out sets and games, as the team leads the entire conference in kills.

“Ever since I was old enough to play on my volleyball club team, I knew that was my goal,” said Ittner on his passion for volleyball.

A highly gifted recruit from Placer High School out of Auburn, California, Ittner was a four-year varsity letterwinner as a setter for the Hillmen, earning first team All-Pioneer Valley League honors as well as league MVP. He was named captain two times by his teammates and coaches, while also playing basketball as a forward for two seasons and graduating with a 3.5 GPA.

“Basketball was always a lot of fun, but it was never my main sport,” said Ittner, “Basketball toughened me up.”

Playing both sports helped him a lot physically and mentally, specifically the aspects of jumping, timing and making quick decisions during a game have helped him to be a better setter.

Growing up, his older sister Maddison Ittner, a former Matador student athlete with the track and field team a few years ago, was his role model. Her experience as a student athlete has helped Taylor balance his life on and off the court and her presence is still known, as you can hear her chanting, “Go Taylor” and “WHOOO” at every home game.

Maddison can watch her brother play whenever she wants after recently returning to CSUN as a grad student.

“We have a great relationship, she lives a block away from me and we hang out all the time,” said Taylor, adding, “She has my back and is willing to help me with anything and everything.”

Another major influence in his life and love for volleyball is his father, Randy Ittner, an All-American in volleyball at UC Santa Barbara, where he still holds the record for most blocks in a season, while also having played for the U.S. National Team.

His father put Ittner in every sport possible, believing that sports would help teach him valuable lessons such as hard work and teamwork, two things he always wanted his son to learn.

The main reason why Ittner chose to attend CSUN and play volleyball here over other schools was the coaching staff and how they treated their players.

“The coaching staff is extremely knowledgeable about the game of volleyball,” Ittner said. “They look out for their players and that’s not something every program can boast.”

The present and future looks bright for Ittner and the entire men’s volleyball program.

Ittner has already been awarded Big West Freshman Player of the Week twice this season and National Setter of the week once.

“It feels good but at the same time, there is a lot of pressure to maintain this performance over the entire season and that can weigh heavy,” said Ittner.

In order to achieve their goals, the Matadors will have to beat Long Beach State, who won last year’s National Championship game against UCLA and remain undefeated this season.

“We are definitely good enough to beat Long Beach as long as we play our game,” Ittner said.

Earlier this year, they went against No. 2 UCLA, the runner-up in last year’s championship game, and came away victorious by sweeping the Bruins at home, with Ittner recording 26 assists.

“Staying disciplined and keeping pressure on the other team is our game plan,” said Ittner, “and when fully executed, there isn’t a team we can’t beat.”