Baseball team looks to improve on best season since 2002 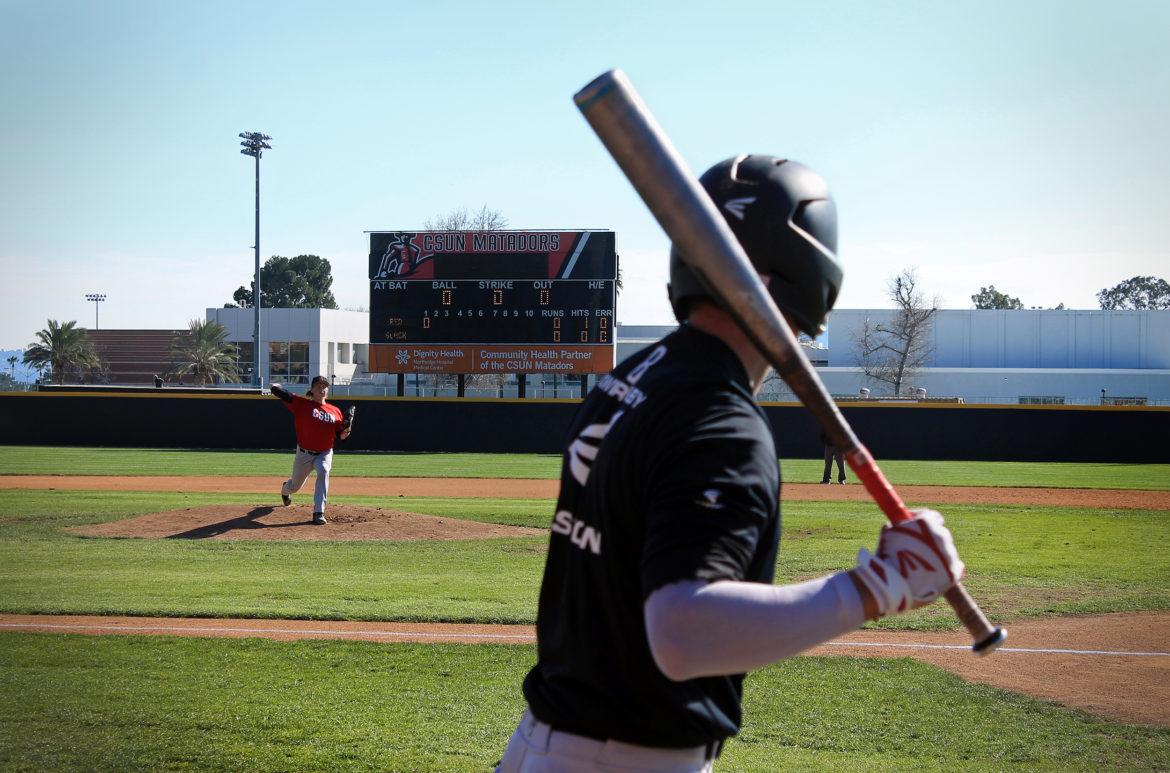 Sophomore Brandon Bohning watches as the pitcher warms up before he goes to bat in a scrimmage at the Matador Baseball Field on Feb. 8. Bohning is coming off a true freshman season in which he started 57 games, hitting .260 with 40 runs and 26 RBIs. Photo credit: Clare Calzada

A year after finishing third in the Big West, their best finish since 2002, the baseball team wants to build on its success and compete for a Big West title this season.

Despite losing five players that earned All-Conference honors for their play last year, including Johnny Bench award semifinalist Trevor Castanova, and being picked to finish seventh in the preseason coaches’ poll, head coach Greg Moore believes that they can outperform the expectations they have been given.

“We work every year to be as good as we can be,” Moore said. “The polling at the beginning of the year is not very indicative of where teams finish traditionally anywhere in any conference. In the Big West, it’s all about playing good baseball consistently. The teams that do that finish in the top third of our conference. If you don’t do that, then that’s not going to happen.”

Going beyond what others say they will do is something this team is used to, having finished above their predicted finish each of the last two years.

“I think those rankings don’t mean anything in the preseason,” sophomore Brandon Bohning said. “It all matters what you do at the end of the year. None of the rankings, none of that stuff matters. It’s all about what you can do through the year and I think that, you know, we’re going to play our best every single day, every single pitch, every single inning.”

Bohning, a middle infielder, started 57 games last season as a true freshman, hitting .260 and scoring 40 runs before winning the Exhibition League championship with the Western Nebraska Pioneers over the summer.

“I think it helped a lot playing a bunch of guys all over the country and just growing with each other and, you know, winning it all was key,” said Bohning. “I’ve got that special chip on my shoulder now that I’ve done it. I can win a championship with a team that’s all focused on the same goal and I really want to bring that here.”

Returning alongside Bohning are senior starting pitchers Walker Armstrong and Isaiah Nunez, as well as senior two-way player Jayson Newman, though the key to a successful season could be the ability of the incoming freshmen and transfers to acclimate themselves to a new environment.

This year’s recruiting class was recognized as one of the nation’s best by Collegiate Baseball Newspaper, the second straight year CSUN has been recognized in this regard.

“Our coaches do a great job of sharing our message. We do things differently here,” Moore said about how his team is able to recruit so well. “It’s not about coming and being baseball players only. It’s about learning that our engagement off the field is related to becoming a complete person and a great baseball player. So when we recruit somebody, we share with them, early on, that coming to CSUN, this is going to be a different experience.”

The two were teammates on the Canada 18U team that went to the Dominican Summer League in 2018, where they played with and against a number of professional players.

“The teams we got to face and the teammates we got to play with, the people we got to meet, it was just an incredible experience,” said Clarke, who has two cousins currently playing professional baseball. “We got to play some professional guys, so instruction league, extended spring, sometimes even some big league players like Marcus Stroman and Russell Martin, so just having that all together in one combination was just an awesome experience.”

Despite having the option to go straight to professional baseball, neither player felt as if it was the right option and instead chose to attend CSUN with the intent to try again after two or three years, though Palmegiani’s choice was especially hard due to his affinity for the Blue Jays.

“It was extremely hard just because obviously it was the team I grew up watching and really cheering for my whole life,” Palmegiani said. “But I knew that the best decision for me was to go to college and to really, kind of mold myself into the best version of myself I can be.”

Led by Bohning, Clarke and Palmegiani, Moore believes that his team has gotten better since last year and can continue to do so throughout the season.

“I think we’re getting better in every facet of our program,” said Moore. “Our players are bigger, stronger, faster. They’re doing more and more in the community and we’re better in the classroom than we’ve ever been. I want everything to get better, whether it’s how we sweep the floor to how we hit the ball through the six hole. It all needs to get better every day.”