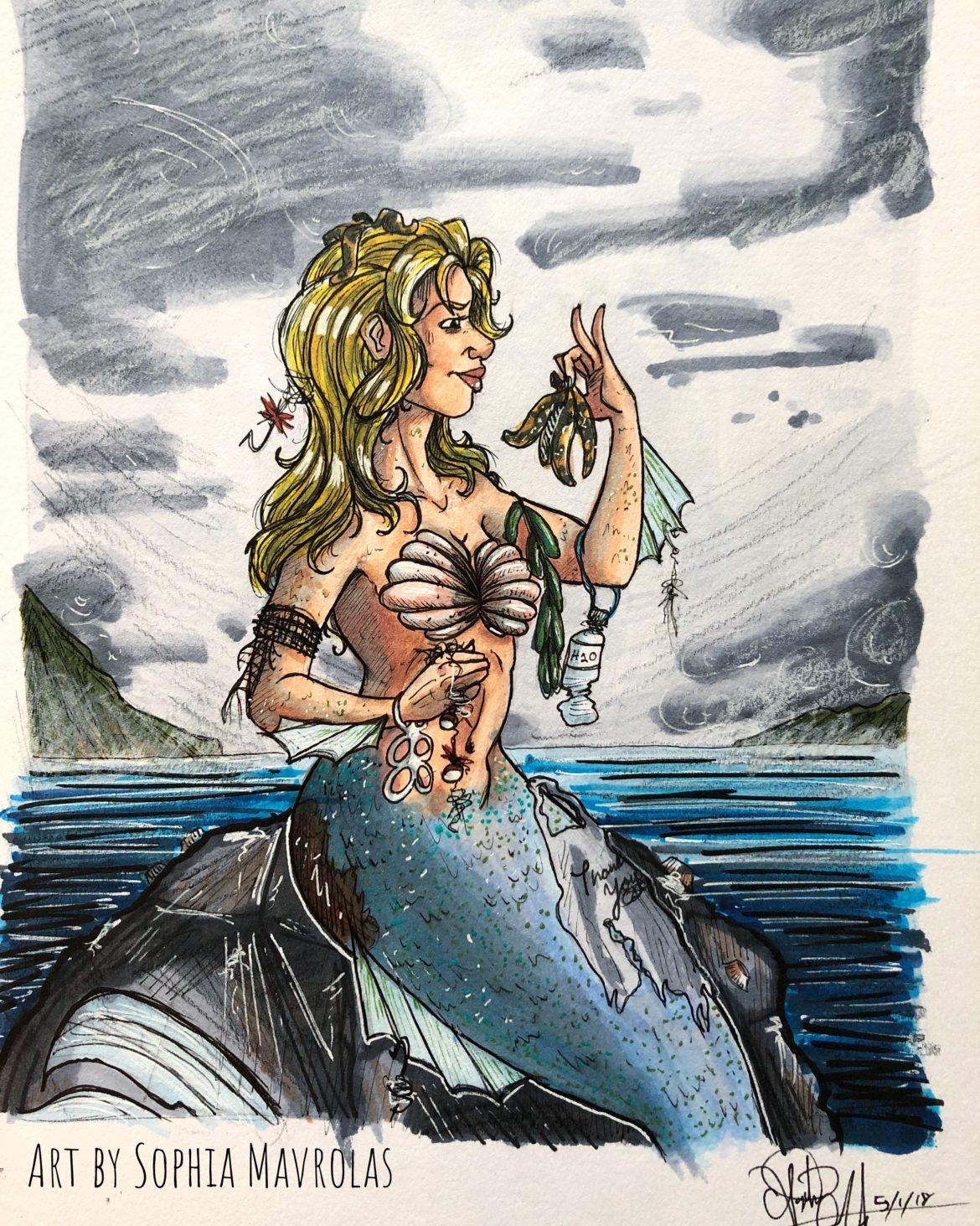 Part of Save the Mermaid Series illustrated by CSUN artist Sophia Mavrolas.

A student animator strives to save the forests and push for environmental awareness with her art through social commentary about modern issues.

Sophia Mavrolas, 24, just recently began her second semester at CSUN after graduating from Antelope Valley Community College with two associate degrees. Her graduation cap paid homage to the late artist Bob Ross, with two tall evergreen trees framing the words, “I Majored in Being a Happy Little Tree.” True to the words on her graduation cap, trees and forests play a large role in Mavrolas’ life.

In 2017, President Trump reduced the size of Bears Ear National Monument by 85 percent, according to The New York Times. Mavrolas, in return, baked a tray of sugar cookies and decorated them with the words “Save The Fucking Forest.”

Spreading awareness of environmental issues has been a constant upward battle for Mavrolas.

It began with her father pushing her to recycle and instilling her with a love of nature through camping and trips to the beach. From a young age her father would tell her, “I’ve already been here, this is your world now, I’m just trying to help you.”

Through her art, Mavrolas is trying to send a similar message about taking care of the world, and all its inhabitants for future generations.

Mavrolas has always been intrigued by different cultures, especially Native American and Polynesian artwork, using them as a source of inspiration for her own work. She created an image of a Maori woman with a moko chin tattoo that is given as a rite of passage from childhood to adulthood.

Mavrolas has also used the same inspiration from indigenous people into her own character design, sketching concept art of Little Red Riding Hood as a Native American, wearing The Big Bad Wolf as a pelt. Her work is riddled with the influences of indigenous people.

In 2016 an oil pipeline was proposed to be built near the Standing Rock Indian Reservation in North Dakota. The pipeline was called the Dakota Access Pipeline but was nicknamed The Black Snake. Protesters argued that the pipeline would jeopardize the Reservation’s access to water. In 2017 the pipeline was built after an executive order from President Trump.

In response to the Dakota Access Pipeline being built, Mavrolas again illustrated a piece. Using watercolors, she painted a Native American woman, standing in water, with a black snake and the words, “Kill The Black Snake,” referring to the pipeline, and the words “Mni Wiconi” on her lower back, meaning “Water is life,” in the Lakota language.

What Mavrolas is most well known for, however, may be her depictions of mermaids. She has created a number of pieces illustrating the fictional sea creatures covered in trash and garbage, in order to get people to think about what they are putting into the oceans.

One of the first pieces that gained a large amount of traction was a blue-tailed mermaid, with her red wavy hair covered in litter, nets and all sorts of debris in her hair with the caption, “Pollution Makes Bad Hair Days.”

Mavrolas did a series of works featuring the mermaids, wanting people to “think beyond yourselves, there may not be mermaids living in the ocean but like my dad says, ‘There is only one world and it’s your world so try and keep it clean, don’t be selfish.’”

“Don’t be a jerk and litter, be kind and take care of the world,” said Mavrolas.

Other mermaid illustrations that hammer in the same message include one beached ashore covered in black oil, being surrounded by litter while choking on plastic can packaging and being caught in fishing nets.

Mavrolas got picked up to work designing backgrounds on a short film that will soon appear on Amazon.