Fresh faces: The Kooks on creating their latest sound 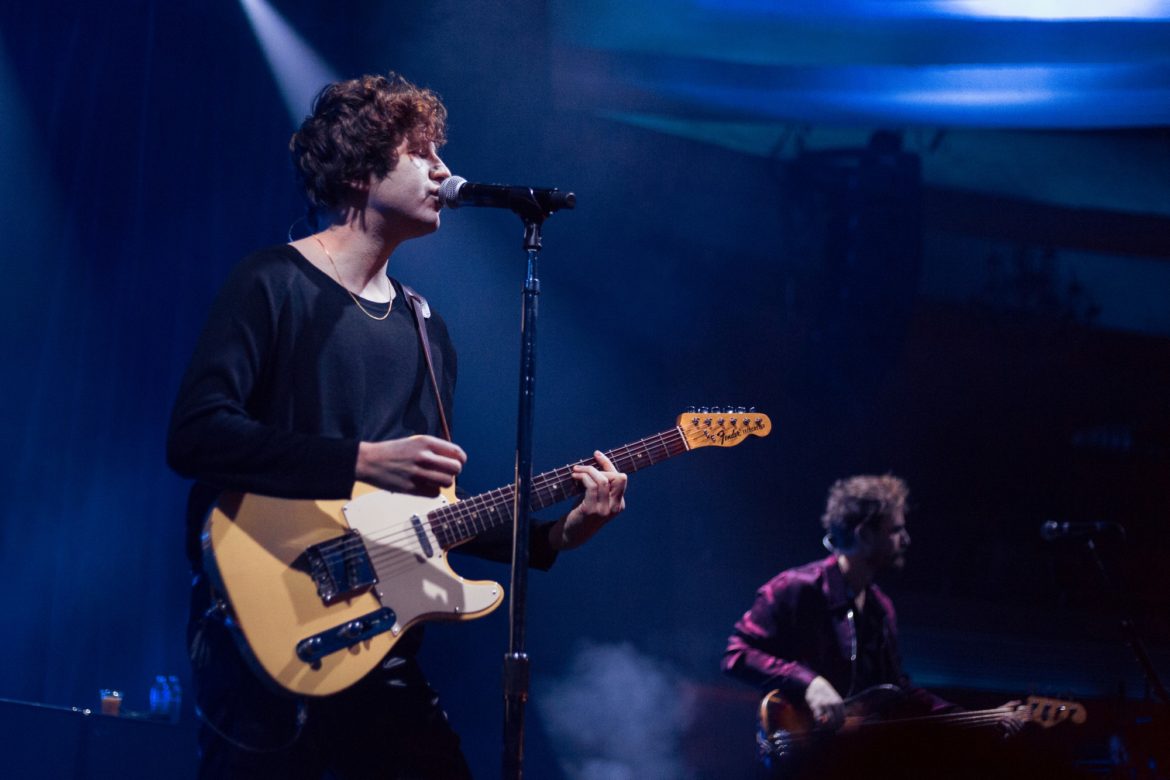 Kooks frontman Luke Pritchard at The Hollywood Palladium on Wednesday, Feb. 12. Their tour will continue across the U.S. until the beginning of March. Photo credit: Joshua Pacheco

At the start of 2006, The Kooks released their debut album “Inside In/Inside Out.” It came during somewhat of a renaissance for alternative rock where bands like The Arctic Monkeys and The Wombats were making lasting imprints to the modernized indie genre.

Lacing the Brit-indie sounds of the early ’00s with a particular strain of blues and jazz is what The Kooks have mastered with their album “Let’s Go Sunshine.” With every album The Kooks have shared with the world, there has been a certain level of experimentality.

Their latest record, released late last year, is a defining album for the group. After releasing a “Best of” compilation album, The Kooks continued to establish their sound in the creation of “Let’s Go Sunshine.”

“(We wanted) to go against the trend, relax the compression, not have synthesizers. We went away from the big production,” he explained. “From day one that was the idea with the sound. Let’s make the Beach Boys (meets) the Beatles but The Kooks.”

In their 2014 album “Listen,” the tracks branched into ’70s funk captured through the band’s use of vintage instrumentation and old-school R&B vocals with lyrics like “down down diggy de down down diggy diggy.”

Regardless, the band maintains the same element that keeps The Kooks in Spotify’s algorithm-based “Indie Rock Club” playlist.

“Indie music has changed a lot since when we started … To be honest, when we started, I wanted to be pop and there was always a pop element in the songwriting,” said Pritchard. “It was always like, ‘Let’s not be afraid to have massive hooks all the time,’ and I think that’s why we’ve continued to have success … Stuff you would consider alternative 10 years ago would have been considered really cheesy pop. So, in a way, I think The Kooks have had a really good impact on music in that way.”

When it comes to commercial success, Pritchard isn’t shy to say they’ve knowingly given it up for the flexibility of their sound.

“(The band) has a lot of tastes of music,” he said. “I’ve been quite proud on the album to have almost a jazz song with ‘Weight of The World’ … I’ll always kind of steer the ship to keep (the sound of) The Kooks as well. You don’t wanna go too far. You don’t want to alienate your fans or yourself. But what you do want to do is feel fresh and mean it and not get in a rut, so I always try to be in the middle of all that.”

Despite pressures from record companies or any self-inflicted pressure after the success of “Inside In/Inside Out,” the band has recaptured their charm time and time again through balanced experimentality.

“We actually could’ve been a way more commercially successful group if we’ve sort of stuck to one thing, but we just like being free and doing what we want to do and maybe in a way that’s what’s made us ‘indie,’” Pritchard said.

It’s been 15 years since the original Kooks formed and since then they’ve managed to attract an extensive fanbase.

“It’s quite classic. (Our fans) range from teenagers to older people,” Pritchard said. “When we play our shows, we’ll see three generations of fans. But with music, you just put it out and you don’t know who’s listening, that’s the crazy thing.”

The band played the Hollywood Palladium, the second date on the U.S. leg of their tour, this past Tuesday to a crowd of about 3,000 people. And yet, Pritchard is unsure they’ve reached audiences in the United States.

“I would like to think that we keep providing good tunes, good music and good shows,” he said. “A lot of people grew up with our first records, some of those songs have gotten their way into people’s lives. That’s something you never really let go of. Especially back home, we have some incredibly loyal fans … Particularly in the U.S., it’s such a crazy competitive place for music and I think we have shocked people like even on this tour. We can still do a proper U.S. tour when we’ve had zero support of radio. We haven’t gone over the top, we have an amazing fanbase. We feel like the outsiders and maybe we are, maybe that’s why people stick with us.”

Outside, fans could be heard saying, “Well yes … The Kooks are such a huge classic band.” They played sing-alongs like “Seaside” and “Bad Habit” for a crowd searching to satisfy their nostalgic hunger. When the band reappeared for an encore and played “Naive,” the crowd broke out howling those classic lines, “I’m not saying it’s you’re fault although you could’ve done more.”

The future of Kooks records is unpredictable, although we can almost always expect to hear their typical grounded and indie-alt edge. The Kooks have proven their versatility, and they have the fanbase and platform to continue practicing outside their immediate genre.

“Now everything’s allowed, there’s no rules, there’s no tribes you can pull from any angle and create something that you think is fucking good and that’s a great thing,” said Pritchard.