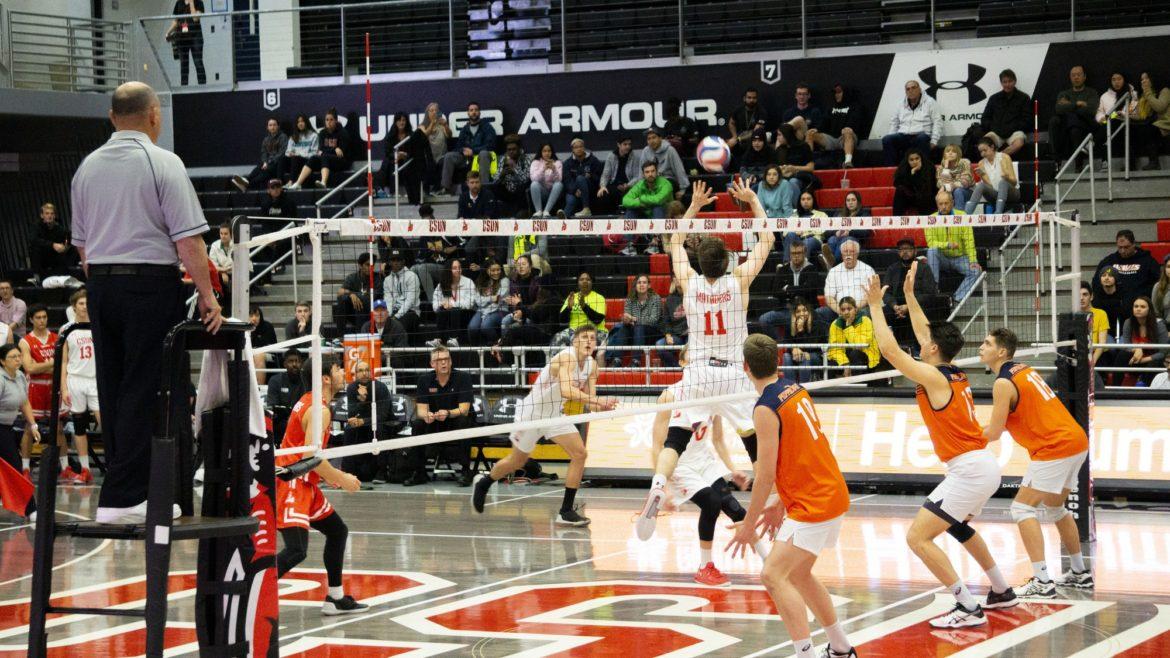 Freshman Setter Taylor Ittner sets up an assist for Junior Tomsia in the second set against fifth-ranked Pepperdine. The Matadors were swept both in the game and in the season series against Pepperdine after the loss Wednesday night at the Matadome.

Despite putting up a good fight, Pepperdine swept the Matadors in straight sets on Wednesday night at the Matadome.

After losing the first game in Malibu back on Jan. 30, the Waves came in to the Matadome and outplayed the home team, coming away with a series sweep over the Matadors this season. The Waves took the game in straight set with scores of (25-20, 25-23, 25-22).

“We knew that Pepperdine was going to be a really good team. They are number five in the country,” said head coach Jeff Campbell. “We’re capable of playing really well. I don’t think we’ve played our best. We haven’t played our best yet.”

The Matadors moved up a rank to No. 11 in the nation this past week, but ended their three-game home stretch with a loss and now sit at 7-6 with three non-conference games left in their schedule.

The Matadors played their best offense in the first set, hitting above .500, though mental errors by the defense allowed the Waves to hit over .600 and slowly take the set away from the Matadors.

In the final set, the Matadors came up short as they rallied for a comeback, falling to the Waves in straight sets.

Senior Dimitar Kalchev had 10 kills on .308 hitting and added seven digs, though he was held without an ace for just the second time this season.

The Matadors will now travel to Thousand Oaks this Friday night as they try to sweep the series against Cal Lutheran.

“We’re going in to Cal Lu on Friday and looking to beat them, because we need to get better,” said Campbell.

After the game at Cal Lutheran, the Matadors will have a week off before they visit the current national champions and undefeated Long Beach State at Long Beach on Friday, March 1 in their first conference game of the season.

“We’ve got to be better against Long Beach for sure, they are number one,” said Campbell. “They’ve lost one match in two years. They’re really good, and we’re capable of playing and beating that team.”

The Matadors will return home to the Matadome on Saturday, March 2 at 7 p.m. as they host Long Beach State in their conference home opener.