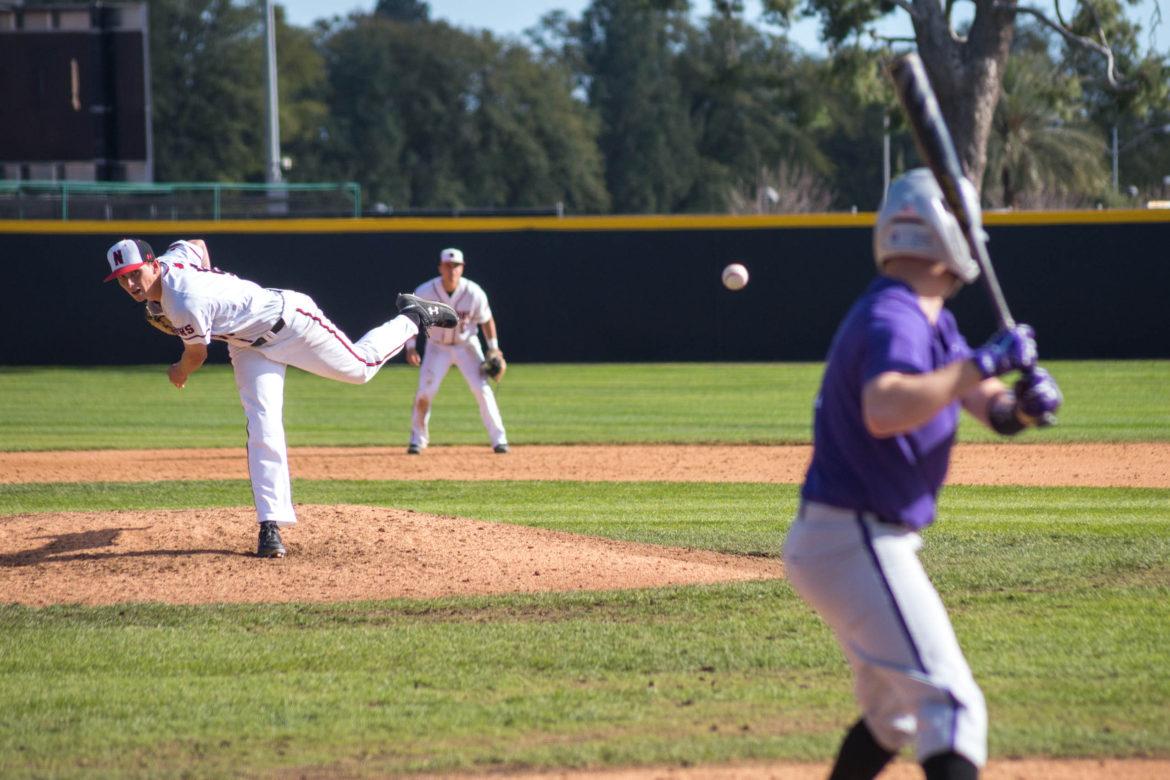 Sophomore Wesley Moore was the starting pitcher in the second game of the doubleheader against Kansas State. Moore lasted 4.2 innings, allowing three runs while striking out five, though he did walk eight batters in a no decision. Photo credit: John Hernandez

The Matadors came back from their first game of a doubleheader, winning 10-8. They attempted to do the same in the second but came up short, losing to Kansas State 6-5 Saturday afternoon at Matador Field.

In the first game, which started on Friday but was suspended due to rain in the bottom of the fourth with the score tied at four resuming Saturday morning, the Matadors trailed 8-4 going into the bottom of the sixth.

They would then score two in that frame and then four more in the eighth, holding the Wildcats at bay the rest of the way.

The second game was a tight affair with the Wildcats holding a narrow 3-1 lead going into the seventh inning before sophomore Brandon Bohning and senior Kyle Barret hit back-to-back RBI singles to tie the game up at three.

The Wildcats, though, would retake the lead in the ninth. Junior Jackson Cunningham, who had gotten out of an inherited bases-loaded jam in the eighth without giving up a run, allowed a home run and a triple to start the ninth, prompting head coach Greg Moore to move senior Jayson Newman from first base to the mound.

Newman was unable to control the damage as Moore hoped, allowing a sacrifice fly and then a home run to give the Wildcats a 6-3 lead going into the bottom of the ninth.

The Matadors tried to do what they did just hours before by pulling together another comeback and nearly pulled it off with Bohning starting the ninth by hitting an RBI triple and then scoring after an errant throw allowed him to run safely to home, making it just a one-run game.

However, with the game on the line and Barret standing on second base representing the tying run, Newman chased a ball in the dirt and was thrown out at first base for the final out of the game.

Sophomore Wesley Moore started the second game for the Matadors and got a no-decision, going 4.2 innings with five strikeouts and allowing just one hit, though he walked eight batters which helped contribute to the three runs he allowed.

“Obviously too many walks but he did a good job of limiting the damage,” coach Moore said. “He was so aggressive with his fastball that when he put guys in play, they had a tough time with him. He’s just got to get a little more consistent in the middle of the plate, and he’s going to do a great job for us this year.”

Cunningham would end up with the loss, though coach Moore liked what he saw from him and the rest of the relief pitchers over the two-game stretch.

“I like the stuff out of the bullpen,” he said. “I think a couple (of) guys who have not thrown in Division I games got in there today. That’s nothing but good for them. Now it’s just a matter of getting a little bit sharper as they come in.”

Bohning ended up going 2-4 with two RBIs and a run scored, while Barret went 3-5 with an RBI and junior Angelo Bortolin went 2-5 with a home run.

“I like that we kept playing late in both games. That’s what it takes,” coach Moore said. “You got to just keep playing in college baseball because it is a brawl, especially in this park, lead can change quickly. We’ve seen that here in this series so far.”

After the split doubleheader, the Matadors’ record sits at 1-1 to start the season.

Their next game is Sunday, Feb. 17 at 1 p.m. at Matador Field, with senior Isaiah Nunez expected as the starting pitcher.

After that, the series finale is on Monday, Feb. 18 at 2 p.m. with freshman Blake Sodersten set to start on the mound.