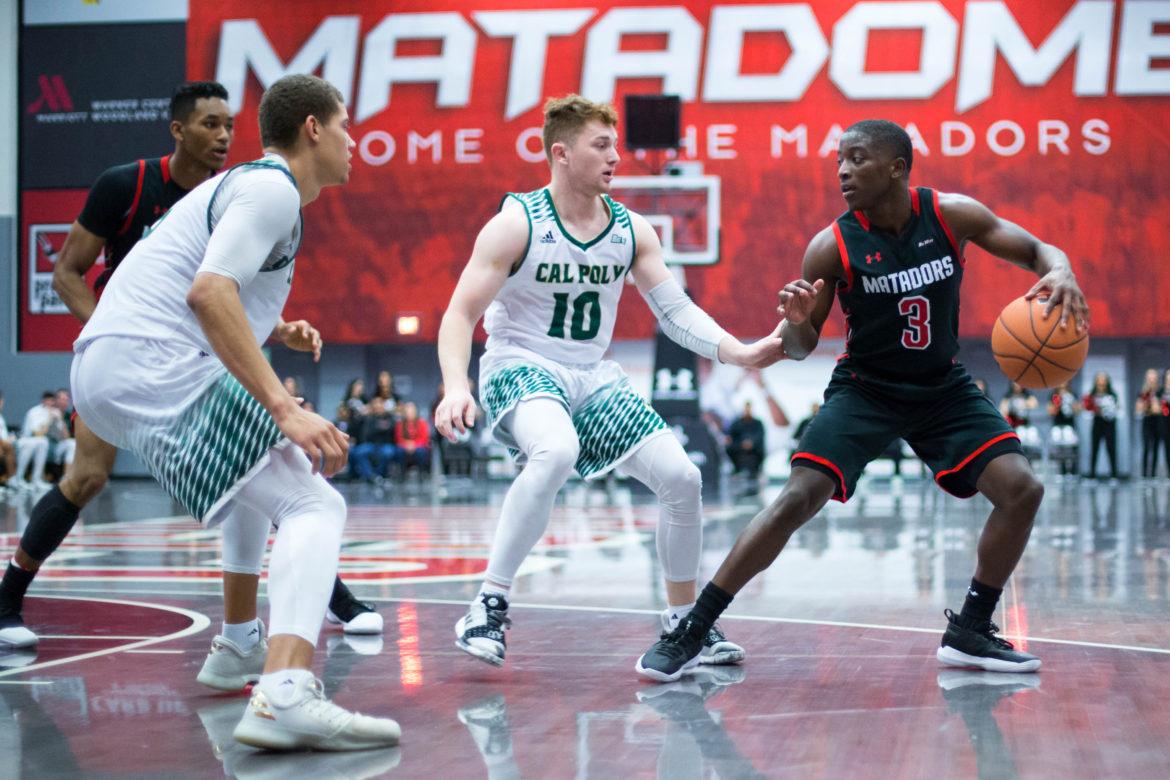 Sophomore Terrell Gomez during the win over Cal Poly on Feb. 2. Gomez went 8-8 from the free throw line on the way to scoring 18 points in the loss against Fullerton on Saturday. Photo credit: John Hernandez

The men’s basketball team experienced deja vu in their 78-71 home loss to Cal State Fullerton, the same score as the reverse game played at Fullerton on Jan. 30.

It was back-and-forth for most of the game until about the 12-minute mark of the second half when freshman Lamine Diane scored to tie the game at 55.

That would be the last time the game would be tied, as the Titans went on a 17-4 run to effectively kill off the game.

There was a lot of physicality in this one, as Fullerton’s Jackson Rowe and Austen Awosika were called for flagrant fouls on Diane and Sophomore Terrell Gomez, respectively, in the second half.

Diane tried to answer back after what he perceived to be a hard foul from Fullerton’s Davon Clare, causing a little skirmish to break out under the Matador basket.

After a hard push from Clare, Diane, CSUN’s highest scorer with 25, responded with a shove, resulting in technical fouls called on both players.

The physical play may have gotten to Diane, who got himself into foul trouble in the second half and fouled out with 35 seconds to go.

“This is D-I basketball,” junior Rodney “Rocket” Henderson said about the physical nature of the game. “We all playing for our lives. Everybody is competing for the championship so, I mean, it’s a hard-fought game. We just got to go out and lay it all on the line.”

Despite all the physicality, the Titans were able to keep their offensive rhythm, something the Matadors could not do.

In the first half, the Titans’ field goal percentage was 50 percent, whereas the Matadors’ was only 33 percent. In the second half, both teams shot better, with their percentages rising to almost 60 and 40, respectively.

In spite of the Titans’ better shooting, Diane pushed hard to keep the Matadors in the game, scoring on par with the Titans’ highest scorer, Kyle Allman Jr.

Diane also had the most rebounds in the game with 17.

It was an off night for the CSUN bench, as Henderson made only 1-6 of his shots from behind the arc, which consisted of three of the five bench points, a far cry from the 19 bench points scored by the Titans.

Diane said after the game that he needs to “play smart every game,” as the opponents have been trying to throw him off his game by getting physical, but that he intends to keep helping his team in any way possible, whether it be scoring points or grabbing rebounds.

“We need to get Rocket out of this funk he’s been in … I just think each player can do a little bit more, whether it’s rebounding or defensively or foul shooting,” head coach Mark Gottfried said. “There’s so much going when you look into each player but I think we can get a little bit better. We just got to stay positive right now, keep our head up and get ready for the next game.”

The Matadors have gone down in the standings to 10-16 and 4-6 in conference play, now in sixth place in the Big West.

They still have time to move up the rank with six more games in the season, though they will need to get out of the shooting funk they have been in the last few weeks if they want to do so.

Their next game is on the road at Long Beach on Wednesday, Feb. 20 before coming back home on Saturday, Feb. 23 to host UC Davis at 7 p.m.