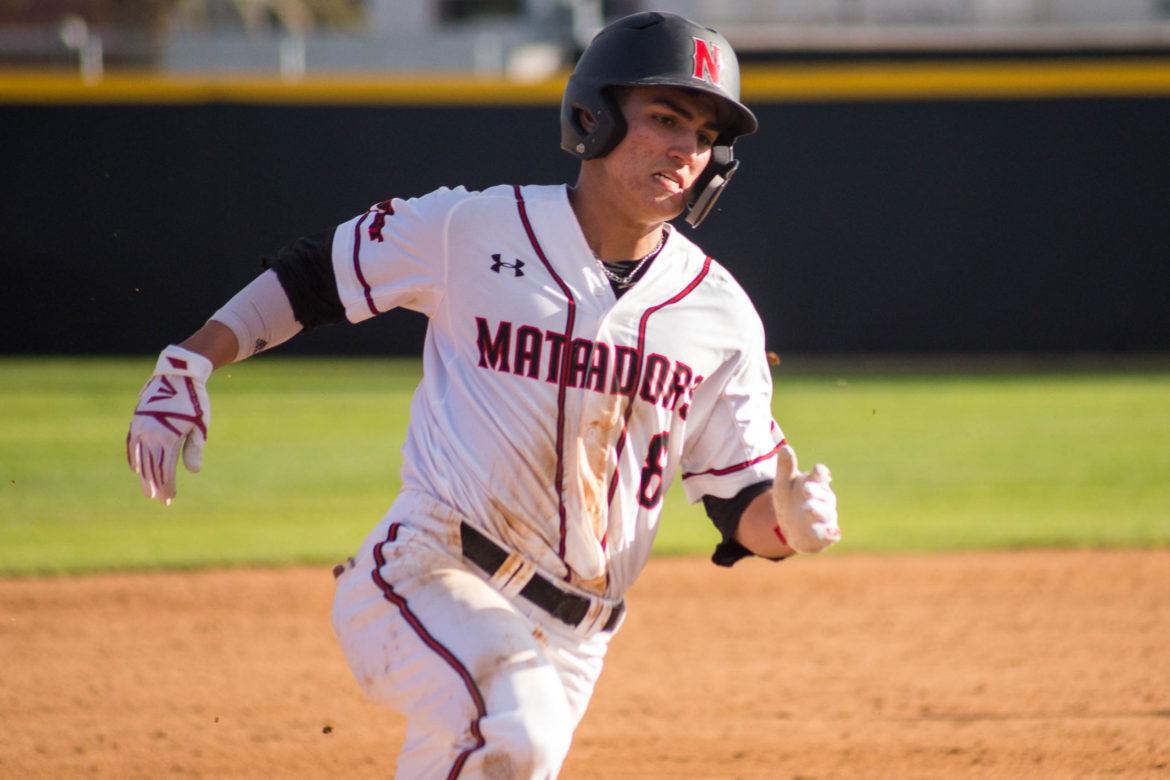 Sophomore Brandon Bohning rounding third base in the loss against Kansas State on Saturday at Matador Field. Bohning hit .421 with a 1.292 OPS in the four games with two home runs, five RBIs and six runs scored. Photo credit: John Hernandez

After holding Kansas State to two runs in the win on Sunday, the Matadors gave up six runs in the ninth inning on Monday, dropping the series finale 11-5 to split the four-game series at Matador Field.

Freshman Blake Sodersten got the start on the mound for the Matadors, going toe-to-toe with Kansas State’s Kasey Ford, with both starters pitching into the fifth and allowing two and three runs, respectively.

Sophomore Brandon Bohning hit a two-run home run to push CSUN out in front in the first inning before junior Robert Bullard hit a solo shot in the second to make it a 3-0 lead.

The Wildcats would end up tying the game and then take the lead 5-3 in the sixth after a few mental mistakes by the Matadors, including an error by Bullard, allowed Kansas State to build a cushion going into the latter frames.

The Matadors, though, fought back and tied the game through a two-RBI single, heading to the ninth tied at five, but as much as the Matadors tried to win, it all unraveled in the ninth as senior Jayson Newman allowed the Wildcats to score six in the final frame and the Matadors were held in the bottom half as Kansas State walked away with the victory.

“A lot of lead changes all weekend,” head coach Greg Moore said. “I think both teams played hard and it was going to be a matter of who scored last. The team that scored last was going to win today and they got it.”

As good as Sodersten was on the mound, keeping the Matadors ahead in the first half of the game, the bullpen failed to hold up their end of the deal, giving up nine runs in 4.2 innings after giving up none in Sunday’s win.

Newman got the loss after his six-run ninth inning effectively handed the game to the Wildcats.

“I think we played decent defense,” Moore said. “Today we made one mistake in the outfield. What we need to do is limit the big inning.”

One possible reason for the horrendous showing by the bullpen could be the toll that a four-game series takes on a player’s body, especially with the rain suspending Friday’s game until Saturday, meaning there were essentially four games in three days, though Moore doesn’t think that had much effect.

“When you come off of zero games, it’s really easy to do,” Moore said about playing so many games in a short amount of time. “It’s a short burst. Four games. I bet there are times in the year when going four games straight is tough on a group of college players but for these guys, coming out of the preseason, they’re right where they want to be, very healthy.”

As a team, the Matadors hit an even .300 over the course of the series with 13 extra base hits and got on base in nearly 40 percent of their plate appearances. They also averaged six runs per game, a high number buoyed by the extraordinary hitting of Bohning.

The sophomore middle infielder had himself another fantastic day at the plate on Monday, going 2-5 with a home run and two RBIs, finishing the series hitting .421, including multiple hits in every game, with a 1.292 OPS, two home runs, five RBIs, four stolen bases and six runs scored.

“I expect (Bohning) to have good at-bats. He understands how to play the game well,” Moore said. “He was well-coached growing up and he just loves to be on the field. He’s a guy that sticks his face in every at-bat.”

After splitting the opening series and getting off to a 2-2 start, the Matadors welcome the Gonzaga Bulldogs to Matador Field next weekend for a four-game series starting on Friday.

The Bulldogs opened their season playing in the Surprise Tournament in Surprise, Arizona, going 1-3 but averaging a respectable 4.5 runs per game.

“We’ll play our brand of baseball. We’ll get back in here, we’ll work Tuesday, Wednesday, Thursday and then get ready to play a good team,” Moore said. “Gonzaga is a good team. I like where we’re at. There were some really good spurts by young guys this weekend and I’m really excited about what these guys are going to do here in the next 20-30 games.”

The series begins on Friday, Feb. 22 at 2 p.m. before a Saturday doubleheader that is scheduled to begin at 10:30 a.m. with the series finale set for Sunday at 1 p.m.